Home » Events » CambrianSV Lisbon: Massive land grabs are there for the taking for Bitcoin SV developers

Lisbon is proud of the great explorers who set sail from its waterfront to chart the unknown world. Magellan, Vasco de Gama and Prince Henry the Navigator, were the Steve Jobs, Tim Berners-Lee and Bill Gates of their day—creating new opportunities by taking risks and changing the world.

On a misty morning there was a small pilgrimage to the Monument to the Discoveries at the mouth of the Tagus, which depicts many of Portugal’s greatest explorers. The developers at the CambrianSV Bootcamp in Lisbon took time off from coding to pay their respects to the city’s great historical figures. 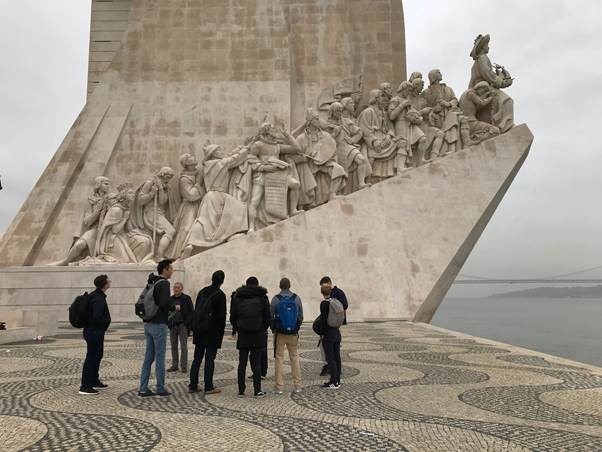 For Paul Martin of Relay X, the parallels were clear enough: “A lot of these figures took enormous risks. They stood on these steps looking at their huge galleons, and did not have any idea whether they’d ever return to see their families.” He talked to the group about their own choices in developing Bitcoin: “You’ve taken immense risk—career risk, reputational risk, financial risk—to be here right now. You’ve planted your flag.”

Others stepped up to tell their story, reflecting on risk-taking and their hopes for the new world they were building with Bitcoin SV.

For Joshua Henslee of the Bitcoin Association, Paul’s words rang true since he quit his job three months ago after working in the same company for seven years. “It wasn’t easy …and my folks they still don’t know—‘what’s he doing, how do you make money?’ …But I felt I needed to be out on the front line helping out.”

“There’s an interesting choice ahead,” said venture capitalist Jackson Laskey of Unbounded Capital, “do you go to build a new society in the new world, or do you go to the new world to bring riches back to the old world?” How is a new Bitcoin world going to relate to existing economies and cultures? Finally, Andrew Kondelin focused on the parallels between the physical opportunities found by the explorers and what Bitcoin developers can do today: “These opportunities exist in Bitcoin SV right now, and that’s super exciting. The massive land grabs we can make right now, you can’t be making in any other place in technology. You can grab Florida for your children and make a name for yourself.”

Check out our daily reports from the CambrianSV Bootcamp in Lisbon: Day 0, Day 1, and Day 2.