A hack on Dr. Craig Wright’s computer network in February 2020 has sparked a legal battle over what constitutes property rights in Bitcoin. Last week, his legal team sent three letters to three BTC Core developers describing a hack on Dr. Wright’s computer network and theft of BTC private key information, and the responsibility protocol developers must face in such a situation.

The notice could lead to the issue of Bitcoin ownership finally being settled by a judge in a court of law, something Dr. Wright has promised in the past. It is this case, more so than the more complex Kleiman vs. Wright lawsuit in Florida, which could legally define Bitcoin ownership rights, rights to the name “Bitcoin” and the Bitcoin database, and the identity of creator Satoshi Nakamoto.

Although the argument centered on whether Dr. Wright has a legitimate case, discussion also veered off on a tangent claiming one of the addresses Wright’s lawyers mentioned is connected to the Mt. Gox hack/theft in the early 2010s. Dr. Wright’s legal team has refuted this claim.

The hack behind the case

On June 12, 2020, Dr. Wright’s law firm SCA Ontier sent a “Notice Regarding Ownership of BTC” to BTC Core Developers Wladimir van der Laan, Jonas Schnelli and Pieter Wuille. The letters described a hack on Wright’s network “on or around 5 February 2020” and subsequent theft of almost 111,000 BTC (currently worth over US$1 billion) from two addresses. The Bitcoin addresses were “unsplit,” meaning they would also contain equivalent value in Bitcoin SV (BSV) and BCH.

No details of how the hack was executed are available publicly, though the letters described the stolen property as private keys to two BTC addresses stored in an encrypted file, as well as part of the information required to open the file. Both the encrypted file and related information were also deleted from Dr. Wright’s network.

The letters did not accuse the three developers of performing the hack itself. However it makes the argument that the stolen BTC remains the legal property of Dr. Wright’s company Tulip Trading Ltd.—and that as protocol developers, the three have legal responsibility to avoid any illegitimate transactions from taking place on the BTC network.

The letters also restated Dr. Wright’s claim to the “Satoshi Nakamoto” pseudonym and asserted that Tulip Trading Ltd. owns the right to the name “Bitcoin” and the Bitcoin database. This formally states another claim Dr. Wright has made in the past: that as the original creator of Bitcoin he is the rightful owner of the name and database, and any other software utilizing these concepts must cease doing so, or pay a licensing fee.

Currently, the two most significant protocols using the name “Bitcoin” and its database are Bitcoin Core/BTC and BCH.

The letters were subsequently mocked by BTC Core lead developer Wladimir van der Laan (aka @orionwl) and their supporters within the community: 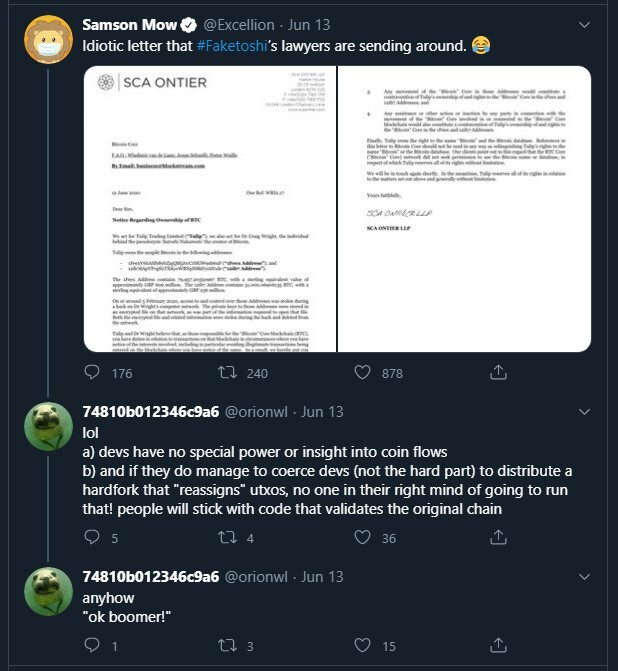 A tweet from Blockstream’s Adam Back even appeared to tacitly admit that others know who Satoshi Nakamoto really is:

Maybe we should get mentally prepared to disown Satoshi. Nuke the nym from orbit, just to be safe. pic.twitter.com/LQcdkK8U5x

Dr. Wright’s legal team referred specifically to two BTC/Bitcoin addresses, the encrypted public keys to which they claimed were stolen:

The first address (1Feex) sparked interest on social media and an article in the news site Cointelegraph, with several claiming it was linked to a series of hacks that eventually led to the demise of Mt. Gox in February 2014.

SCA Ontier have stated that this claim is erroneous, saying:

“They will say that there is evidence suggesting that that address was part of the Mount Gox hack, and specifically a document filed in U.S. proceedings that appears on its face to be a record of a Skype chat from December 2010 involving Mark Karpeles of Mount Gox. That evidence is so unsubstantial that even commenting upon it gives it more credence than it deserves. I note that CoinTelegraph’s article does not elaborate at all on what the evidence is. As far as we know the Mount Gox liquidators have never asserted that 1Feex was stolen from Mount Gox, which you would imagine they would, if their records supported that assertion.”

Mt. Gox was one of the first exchanges that traded BTC for fiat currencies, and for a period was by far the most popular. It shut down the service suddenly in 2014 and later declared bankruptcy, leaving many large and early Bitcoin holders, who had left large portions of their holdings on the exchange, out of pocket. Details of the hack and theft of 850,000 BTC emerged over time, though there has been no official settlement or final proof of who was involved.

Mt. Gox was based in Tokyo and registered in Japan, and despite lengthy bankruptcy proceedings led by court-appointed trustee Nobuaki Kobayashi, Mt. Gox account holders have seen none of their BTC account balances returned.

In an unrelated event last week, Mt. Gox CEO Mark Karpeles saw a Japanese court reject his appeal against a two-year prison sentence for data manipulation. Karpeles, who spent almost a year in Japanese prison without charge, was released on bail in 2016 and subsequently tried for embezzlement and data manipulation. He was cleared of the embezzlement charges but found guilty of manipulating data to hide the theft from employees and account holders. Neither criminal charge concerned the theft of 850,000 BTC.

The circumstances surrounding the Mt. Gox theft and its aftermath are murky and have been controversial. They include the appointment and departure of exchange Kraken as official handlers of account holders’ redress, and further controversy involving the subsequent handler, BitPoint. Kobayashi has stated that delays in returning creditors’ funds are the result of an ongoing lawsuit between Mt. Gox and former U.S. partner CoinLab.

Dr. Wright has said the waters surrounding early Bitcoin businesses might be even murkier.

Lawyers representing convicted Silk Road Marketplace operator Ross William Ulbricht, defending him at his trial for operating the undercover Silk Road marketplace, claimed in 2015 that the pseudonymous “Dread Pirate Roberts” behind Silk Road was not him but Karpeles.

The Department of Homeland Security had also suspected as such in 2012-2013. Karpelès publicly denied the claim on Twitter, and no formal moves were ever made to prosecute. Ulbricht was eventually found guilty and sentenced to life in prison.

Law is law and it’s time to settle that

Though unrelated to Dr. Wright’s current hacking and theft claims, the Mt. Gox debacle revealed to many the extent of criminal activity and behind-the-scenes manipulation that has plagued Bitcoin from its earlier days. This has damaged Bitcoin’s reputation and stunted its acceptance and growth.

It is this kind of reputation that Dr. Wright and Bitcoin BSV seek to combat and remove from the digital asset space. Settling ownership rights over Bitcoin units and the Bitcoin name/database could go some way to restoring Bitcoin’s reputation and helping it find a legitimate place in the global digital economy.

It’s no secret that Dr. Craig Wright is unloved by those in the BTC community. His law-abiding approach to Bitcoin, coupled with the likelihood that many privately believe he is actually Satoshi Nakamoto, could explain many of the attacks on his character and reputation. A traceable Bitcoin that uncovers past crimes and other illegitimate actions is the last thing many people want.

Their words may not matter if Dr. Wright is able to settle his claims in court, though.

Many in the blockchain and digital asset industry have repeated the twin mantras “code is law” and “your keys, your Bitcoin” over its eleven-year history. The belief stems from the notion that math is the only absolute law and it necessarily trumps any legal rights—even where it may benefit a bad actor to the detriment of a rightful owner. Dr. Wright has led the counter-charge to that view, maintaining that human law remains paramount. He has often promised to take that battle to the justice system to prove his point.

If you’re shocked by this letter, you haven’t been counting how many times Craig has said “law” in the last year.

As Dr. Wright has said in the past:

“It’s funny, the cypherpunks want to demonstrate that code is law. In part, they think they can back me into a corner. They think that they can support their assertion by making me sign something publicly. As such, they have a whole plan about keys and how it suits their purpose. Little do they understand, law works differently.”

“The important thing to understand is: law is law.”