Over the last few weeks, some of BTCs strongest narratives that it relies on to keep its price afloat were disproven—BTC myths were busted.

“BTC is a safe haven asset.”

“BTC is a hedge against inflation.”

“BTC is a good investment during times of economic and geopolitical uncertainty.”

“BTC allows you to be your own bank.”

These were all proven to be false. Between the Federal Reserve’s impending interest rate hikes and the conflict in Ukraine—which seems to be escalating into a massive war—BTC’s strongest narratives fell apart.

BTC and other digital currencies have become so intertwined with the traditional financial system that they move with a majority of the equities markets. In this day and age, investing in BTC is like investing in a high-beta S&P 500.

In other words, BTC and digital currencies are risk assets, and when there are global economic and political conditions that threaten risk assets, investors rotate out of their risk positions into assets that come with a lower degree of risk, such as interest rate products.

When risk assets are threatened, investors have historically turned to gold because in addition to having a fixed supply, it tends to go unaffected by monetary and fiscal policy changes.

Many people say BTC is digital gold. However, when inflation began to ramp up at the end of 2021, and the Federal Reserve announced that they would be increasing interest rates beginning in March 2022, BTC was negatively impacted, and its price declined severely. Meanwhile, investors turned to true safe havens like gold. 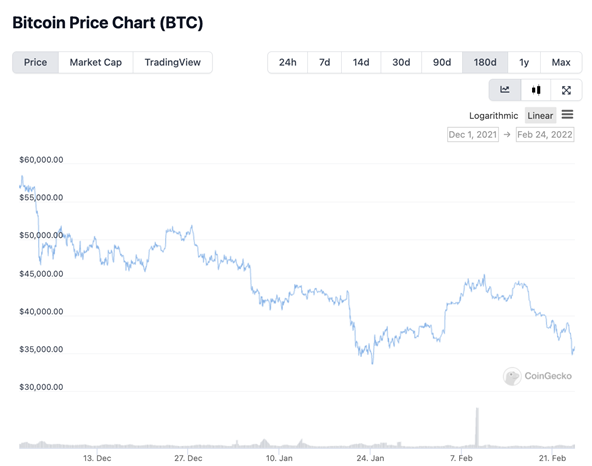 As you can see in the charts above, gold, the historic safe haven asset that has proven itself to be a hedge against inflation, has steadily increased in price ever since the inflation concerns entered the picture. On the other hand, BTC has been steadily declining and has lost about 37% of its value from December 1, 2021, to February 23, 2022.

BTC allows you to be your own bank

Some people found BTC and other digital currencies attractive because they were marketed as forms of money that allow individuals to be their own banks. People say this because you can take ownership of your private keys and be the custodian of your assets, unlike working through a financial intermediary like a bank that requires you to go through them to access your bank account.

But does BTC really allow you to be your own bank?

When answering this question, you have to think about what money truly is. In my opinion, money has to be accepted locally or globally. If things really hit the fan and you needed to survive, would you be able to pay for food, rent, your mortgage, and the other expenses of life in BTC? In most locations, the answer is no. You can not purchase life’s necessities in BTC.

If your form of money is not accepted as if it were money—you have to ask yourself if it’s real money, and if it’s not really money, then are you really your own bank?

Even if you tried to argue that you can cash out your BTC for fiat at any time, in most instances, this requires you to rely on a financial intermediary like a digital currency exchange, which means you will have to relinquish custody of your assets to your intermediary before you get fiat.

I am sure there are exceptions to this rule somewhere in the world and that there are probably towns or local economies where you can do everything in BTC or some other digital currency, but those exceptions are not commonplace.

A popular narrative was that BTC is a good investment in times of geopolitical and economic uncertainty. However, when Russia invaded Ukraine on February 23, the price of BTC plummeted.

In times of war, the groups of people who can allegedly benefit from BTC have much more to worry about than converting their native currency into digital currency—for example, staying alive and leaving the war-torn country.

The same goes for those living in areas where the economic future is uncertain. There are some instances where BTC is less volatile than the native currency in a developing country. However, these areas are even less likely to accept BTC for goods, services, and other living expenses and are more likely to lack the infrastructure needed to facilitate Bitcoin payments.

So what have we learned?

The truth is, BTC does not do a majority of the things that it’s marketed to do. These narratives regarding BTC were theories that were created before BTC ever had to be put through the tests that would prove the narratives to be true or false. But now that the world is putting these narratives to the test, BTC is failing in nearly every department.

I do believe that there are a few exceptions to the argument I am making in this article, but even in those instances, BTC does not live up to its narratives very efficiently.

BTC is really just a speculative asset. Individuals have created these narratives around BTC because they want it to be attractive to the groups of people who have not invested in it. Why would they do this? So that newcomers will buy BTC, pushing the price up, and providing the exit liquidity for those that were early to the BTC party.

I don’t have a problem with risk assets or speculative vehicles, but BTC is showing the world that it does not provide the protection against certain economic and global conditions that many people believe it does.

Follow CoinGeek’s Crypto Crime Cartel series, which delves into the stream of groups—a from BitMEX to Binance, Bitcoin.com, Blockstream, ShapeShift, Coinbase, Ripple, Ethereum,
FTX and Tether—who have co-opted the digital asset revolution and turned the industry into a minefield for naïve (and even experienced) players in the market.

The story of the BSV/BCH hash war is a brutal chapter in Bitcoin, and it laid the groundwork for much of what has transpired since, but that story has been told a few times.