“The whole Internet can work this way,” said Twetch CEO Josh Petty in his presentation at the CoinGeek London conference. It was a typically bullish sentiment from the two days in which dozens of speakers demonstrated their confidence in the momentum building around Bitcoin SV (BSV).

Superficially, that momentum was felt in the more than doubling of the number of attendees since the last conference in Seoul six months ago. Even more superficially, it was seen the extraordinary width and clarity of the screen at the back of the stage—designed to be viewed by creatures with at least three eyes.

More importantly, it was noticeable in the way BSV technology and businesses were discussed on stage. Petty announced new features for Twetch, taking the social media app to a slicker, more user-friendly form: “Everything you touch and feel is going to be a microtransaction,” he said, with “no more swipe”.

Familiar faces from previous conferences spoke with new certainty about what they were doing and had new achievements to report and announcements to make. Jack Liu of the RelayX wallet provided a moment of drama when he unveiled the new look of his app—which is essentially a blank screen, the idea being that your camera opens to scan a QR code. More broadly, users will access Relay through other apps, making the integration of money functions almost invisible for users.

Newcomers, such as Thomas J. Lee, from Fundstrat, endorsed and elaborated themes previously only heard from those inside the Bitcoin SV tent. With detailed financial graphs, he predicted a “parabolic moment” when institutions get serious about crypto—similar to the effect on Tesla’s share price when Wall Street started paying attention to its potential (below): 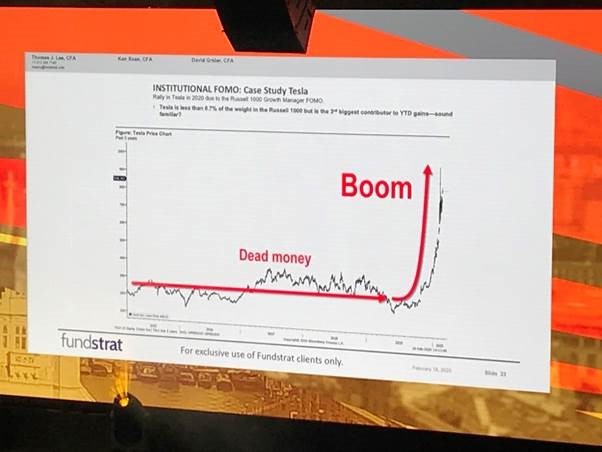 Lee’s colleague David Grider summarised from Fundstrat’s recent report on BSV, highlighting BSV’s transaction growth and the potential of its nascent businesses. He singled out the coming Maxthon browser, the Baemail, email service and True Reviews as examples of more than 400 projects building on BSV, with more in prospect using the increased functionality provided by the Genesis fork.

The first day ended with a rousing speech by Dr. Craig Wright, which provided a laser-focused summary of his original intentions for Bitcoin as Satoshi Nakamoto and his present-day assessment of the prospects for BSV from microtransactions. 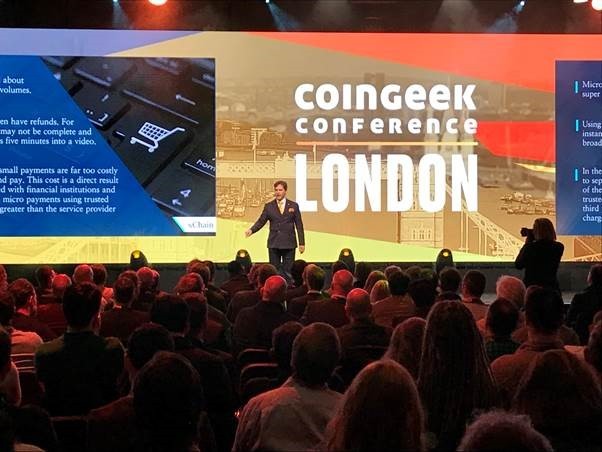 On Friday, there was more. Jeff Chen, the founder and CEO of Maxthon talked about his BSV browser. With his long track record of successful Internet browsers, this is no pipe dream, but a solid business proposition in development.

If you thought BSV innovation was limited to the world as seen through a computer screen, Stephan Nilsson and Ken Hill took us out into the real world. Hill described EHR Data, a new business that plans to revolutionise health information, putting patients in charge. And Nilsson, of UNISOT, demonstrated his app to track an item through a complex supply chain – in this case, a haddock.

Finally, at the end of the second day, the veteran economist and technology commentator George Gilder, another newcomer to BSV gatherings, put Satoshi’s ideas into perspective. He was confident that BSV solves the “two-fold scandal in the world economy,” namely Internet security and the excesses of global currency trading.

“We’re now engaging in forging a new system of the world,” he said. It’s a system to replace the “failed economic model” of Google. “In an information age, economies can change as fast as minds.” We’re moving to a world in which security comes first, everything is correctly valued and “nothing is free.”

Gilder gave an account of how he had been persuaded that Dr. Craig Wright is Satoshi. Sitting next to him in the final session of the day, he said, to applause that “I think you can safely celebrate Craig.” It was a fitting tribute to the man who had already changed the lives of everyone at CoinGeek London, all of whom are convinced that the best is yet to come.