Home » Business » Fundstrat: Retail adoption in next 5 years is key to crypto

In 2019, crypto assets were the best returning asset class—and in 2020 and 2021, the markets look to hold much promise. According to Fundstrat, we are in a bull market, they say this because Bitcoin has broken its 200-day moving average. According to the Fundstrat team, this is a metric that often pre-dates a positive movement in the cryptocurrency markets.Beyond that the crypto-markets have significant room for institutional investment. The crypto market is only worth 0.1% of traditional liquid assets, and a lot of institutions have little to no exposure to crypto-assets. What we may see take place in the future is an event in the cryptocurrency markets similar to what has recently taken place with Tesla’s stock.

According to Fundstrat, a number of institutions were underexposed to Tesla stock, but there came a point in time when they needed to up their exposure. When institutions bought in, the stock price rocketed, this created FOMO in retail investors, who then began to buy Tesla stock themselves, which continued to push the positive performance of $TSLA. 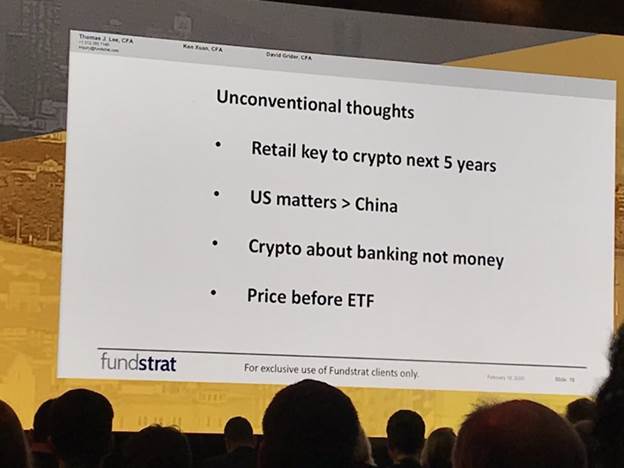 Here are two takeaways from Fundstrats unconventional thoughts on the cryptocurrency markets:

A good year for the cryptocurrency markets

David Grider, Senior Research Analyst at Fundstrat Global, closed the presentation out by giving a brief analysis on Bitcoin SV and how it uniquely addresses problems that exist in the world and its differentiating factors compared to other cryptocurrencies in the market. For instance, how the Metanet is an on-chain version of the internet that solves many of the problems the internet has. How the Genesis protocol upgrade eliminated block sizes which allows for unprecedented Bitcoin development. And how the growth of the Bitcoin SV network has been driven by fundamentals rather than speculation on the price of BSV.

These are just a few of the main talking points of Thomas Lee’s keynote presentation. In the near future, we will be uploading the full presentation online, we encourage you to check it out once it goes live.

If you were not able to make it to the CoinGeek London conference, we encourage you to watch the presentations via livestream.