Is there even a reason for BCH to exist at this moment in time? This is not sarcasm, I genuinely ask this question.

I see nothing over at BCH that could compete with Bitcoin SV. The idea behind BCH was to be “cash for the world,” an easy to use digital asset better than fiat. It is not better than fiat though, and that is a problem if it was your sole pitch.

The problem with BCH is easy to detect

There is one ridiculously obvious flaw in the way BCH proponents think: they believe in order for the world to use BCH as digital cash, BCH just has to function technically as smooth as possible as digital cash. But this is not how it works.

If you want a thing to be treated as cash, which means easy to exchange in/with, it needs a use case first. People would need to use BCH first for something that cannot be substituted with another thing, then due to this use case it could become a form of cash.

But there is no use case for BCH.

Do not get me wrong here: the use case I am demanding for anything to become cash cannot be “being cash.” It must be a whole other use case apart from the possibility to use it as cash later on.

Example: gold had a use case before it was used as cash. Gold was used for jewelry and mythological/religious reasons. Due to this unique use case in gold, as well as other factors, people started to use it as cash. Gold was not cash first and then became valuable as jewelry, it was first valuable as jewelry and then became cash.

BCH proponents do not grasp this at all.

They work on the technical functionalities of BCH as electronic cash without focusing on the fact that it needs a use case first. Economic nonsense and this explains very well why nobody uses BCH as electronic cash still. BTC has a whole other flawed narrative with their “digital gold” deception, but at least BTC acknowledges that Bitcoin will not replace fiat by solely existing.

Bitcoin SV does it the other—and correct—way around: create use cases for Bitcoin SV first (for example Twetch, Peergame, WeatherSV or dimely.io), then BSV tokens have a value due to their utility, which makes it possible for them to be used as cash later on.

Bitcoin SV clearly sets the tone: when the BSV dedicated wallet and service provider HandCash released its new features and design decisions, a famous BCH wallet more or less took great parts of HandCash for its own application: 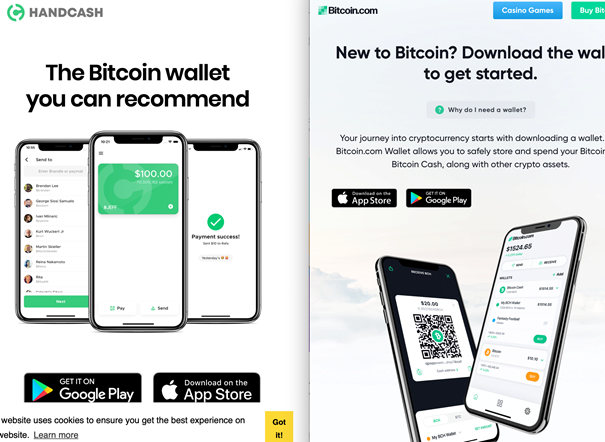 If you install both HandCash for BSV and the BCH wallet on the right of that image above, you will get confused: am I using HandCash right now or this BCH wallet? Where did my coins go?

HandCash has a brutally sharp team that is pioneering user interface, user experience and more. BCH has no such bright minds in their staff and therefore has to rely on copying—almost stealing—application wise.

BSV’s HandCash has not been the only focus of BCH developers, also Bitcoin SV exclusive Money Button seems to attract BCH’s attention. BCH’s Roger Ver publicly called out on a BCH subreddit for the need of a “BCH Money Button”:

So Money Button is next on the “What BCH learns from BSV”-list. Keep in mind that copying means being always one, two or a thousand steps behind. You may be able to copy ideas and design, but you don’t grasp the vision.

The BCH people simply have no one to compete with Money Button’s Ryan X. Charles and the rest of the Money Button team. It all comes down to people, and the smart ones are active in and on Bitcoin SV.

It is safe to say the BCH team does not understand where the real Bitcoin is going. They are blindly following BSV without grasping the vision. BCH is not competing anymore, it has given up and relies on playing second fiddle.

BCH not only has problems with understanding the theory behind how assets actually have value, how something could become cash or that blatant copying is not wise as a long term business plan. We see more problems for BCH lurking on this image: 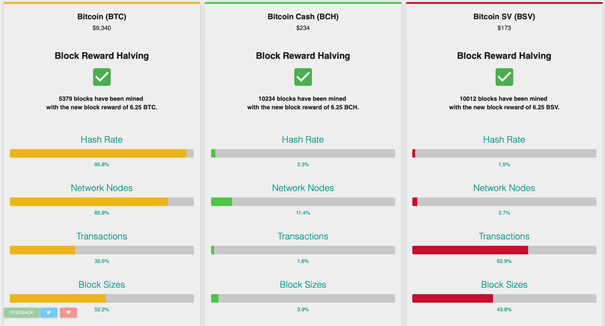 Let us assume all the metrics there (hash rate, network nodes, transactions and block sizes) were equally relevant—they are not, but that’s another topic.

We clearly see that BCH has nothing to offer that Bitcoin SV or BTC is not doing better already. Hash rates of Bitcoin SV and BCH are comparable (slightly fluctuating from time to time), nothing to see here. BCH has some more network nodes than Bitcoin SV, but way less than BTC.

Talking about transactions: look, BCH has almost no transactions. Even BTC has way more, although it is a hassle to transact with BTC due to high fees and other factors. Bitcoin SV has the most transactions and there are reasons for that.

Block sizes show it, too: BCH has nothing, while Bitcoin SV and BTC have decent percentages there.

All in all, it is safe to say that BCH is the obvious standout loser in the battle for the real Bitcoin. Who really won that Hash War?

While BCH is stuck around the same price it had shortly after the BCH/BSV split, Bitcoin SV price appreciated greatly. This is understandable, as digital asset enthusiasts woke up to the fact that only unique use cases for an asset could lead to sustainable price appreciations.

It is going terrible for BCH, and I have not even talked about the insane amounts of infighting in the BCH community: literally kindergarten and worse. Due to its stable protocol, no kindergarten discussions are necessary in Bitcoin SV.

There will come a time when BCH proponents will see the metrics /arguments above and really consider them to make their decision: to finally leave BCH behind and get involved in either Bitcoin SV (BSV) or BTC.

My guess is: they won’t go back to BTC, but retreat to Bitcoin SV.