Thanks in part to the Quasar protocol upgrade, Bitcoin SV (BSV) surpassed the BTC token in the number of daily transactions in November. 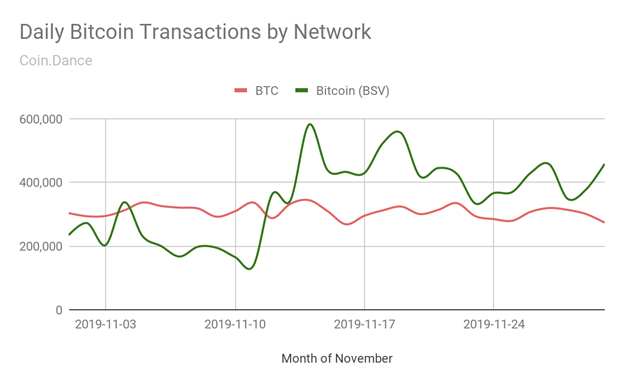 For many in the BSV community, this news comes as no surprise since the number of transactions per second (TPS) had doubled every quarter. During November 2019, BSV processed 5 TPS on average, permanently overtaking BTC (~3.5 TPS). BSV is projected to exceed ETH (~8 TPS) in Q1 of 2020.

Other blockchain projects have famously shown they can momentarily boost network transactions without providing any real-world utility. The rising activity on the BSV network can be tied directly to the developer community’s excitement over roadmap to restoring the original Bitcoin protocol to increase on-chain scaling.

Scaling BSV will help support enterprise usage for tokens, smart contracts, big data, and other applications. It is the only advancing blockchain capable of support high transaction volumes while also keeping fees low. Commercial users needed these features to transmit information and manage the microtransactions effectively.

More significant scaling will soon be coming to the Bitcoin SV blockchain. A test on November 7 by the Bitcoin SV Node team’s Scaling Test Network (STN) set a new record for the number of transactions in a single block at over 2.7 million, smashing the previous record. The 2.7 million transactions would have generated 5.4 BSV in fees and took under 30 minutes to fill.

The increased number of transactions bodes well for miners as the halving set to occur around May-June 2020 quickly approaches. The primary income of Bitcoin miners will rely less on block rewards, and more on transaction fees as the Bitcoin whitepaper initially intended. Once the rewards stop around 2140, miner’s income will be entirely derived from transaction fees.