One of my favorite sources of information within the BSV ecosystem is Joshua Henslee’s YouTube channel. His videos are frequent, topical, brief, and easy to follow, even for those are who less technical like me. As a loyal viewer of his content, I particularly enjoyed his recent video entitled, “Why BSV Processing 20 million transactions does matter,” and it even relates back to the gaming space in a way.

Henslee opens the discussion by referencing a pie chart that has been circulating on social media, a chart that shows BSV at 80-90% of all Proof of Work (POW) blockchains, including ETH, BTC and BCH (not including Solana which is a Proof of Stake (POS) chain). 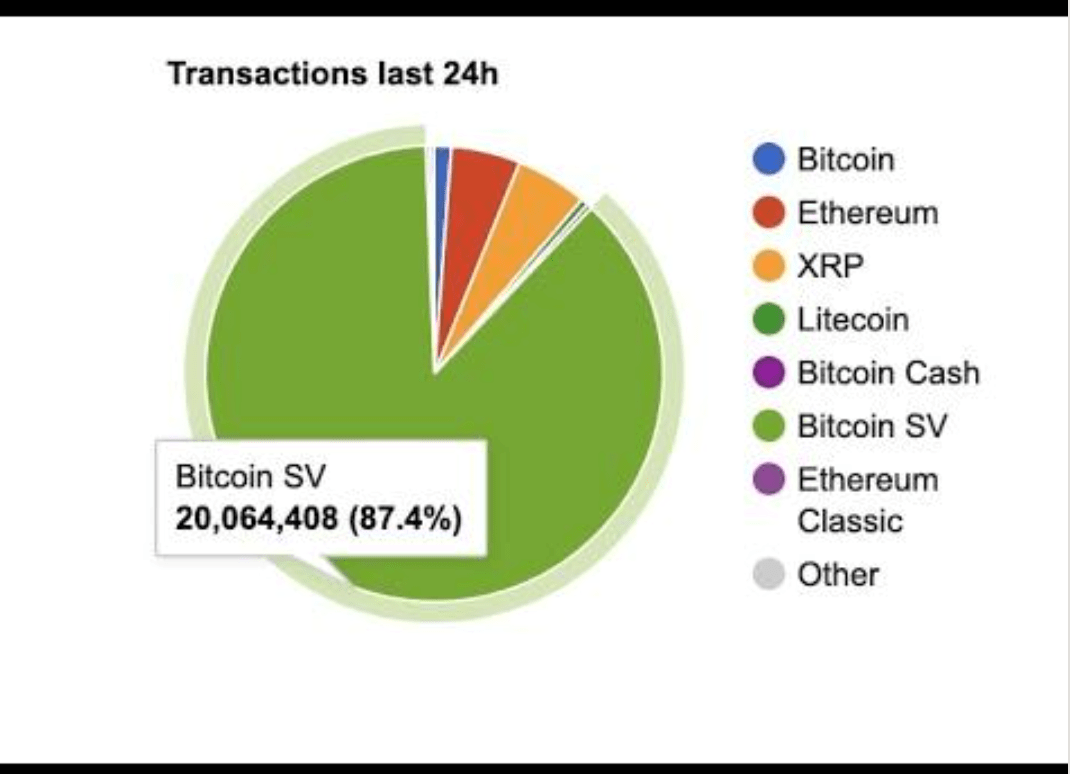 Henslee claims that the people who say these transactions of CryptoFights are spam and “just video game data” are simply missing the point.

“The point is, when you do that amount of transactions it actually shows that you can do it,” Henslee said.

“It’s one thing to talk about it and theorize and plan for it. It’s an entirely other thing to do it,” he said.

When theories get tested out, it’s inevitable that things will happen that you did not plan for. This is common knowledge, according to Henslee.

So what will happen to these other chains when they get to the level of 20 million transactions a day?

“It’s one thing to take the punch, most folks don’t come back. So can you? I think that’s the question,” Henslee said.

In regards to BSV’s 20 million transactions in one day, Henslee thinks the network handled it well because nothing really broke down, meaning BSV is ready to handle this level of volume on a daily basis. Likely “stuff” will end up breaking in some way he said, but the point is, it gets “hit,” then it “levels up.”

Henslee compared BSV’s transaction journey to working out, something I can certainly related to and likely many of you too. By working out we destroy our muscles, but then they grow back stronger. People claiming that the 10 million daily transactions on BSV are insignificant are failing to see the bigger picture, according to Henslee.

“This is the inability for people to think past the first consequence,” he said.

Henslee is not surprised that people on social media are downplaying the significance of so many transactions per day on the BSV network, especially because none of the other blockchains scale, so “that is not even the game.”

“No one actually cares about scale, because if they did, things would be a lot different. The primary metric is about price,” Henslee said.

If everyone is so focused on “number go up” and the other chains are so far ahead of BSV in terms of price, why are they still talking about BSV!? BTC is only doing 300,000 a day and BSV is at 20 million. That’s why.

“Even though the impact is not large, the proof that it can be done is huge because that means you can move on to the next step and that will also enable new software and new things to be built to fix the old problems,” he added.

Meanwhile, all the other chains are playing catch up, trying to figure out how to deal with 5-megabyte blocks while BSV is dealing with terabyte blocks. It will be very interesting to see how this all unfolds…

The filings also mention M.Y. Safra Bank, which partnered with SFOX in 2019 to offer its customers cash deposit accounts backed by the FDIC.

The Crypto and Digital Assets All Party Parliamentary Group wants to hear from the public on regulations, CBDCs, the role of the FCA and BoE, and more.