Home » Business » BSV tops 20 million transactions in a day, aims for much more

The BSV blockchain has reached the remarkable milestone of 20 million Bitcoin transactions in a single day. If it seems like just a few weeks since we celebrated 10 million—it’s because it was! After breaching that barrier, it took less than 20 days to double it.

Impressive as that is, it’s actually small fry compared to BSV’s ambitions. Blockchain projects are preparing to bring even more data on chain over the coming year, especially once the enterprise-grade Teranode protocol upgrade gradually becomes available over the coming year or so. BSV is fulfilling its mission to create an entire new digital economy, one based on the value of data itself. 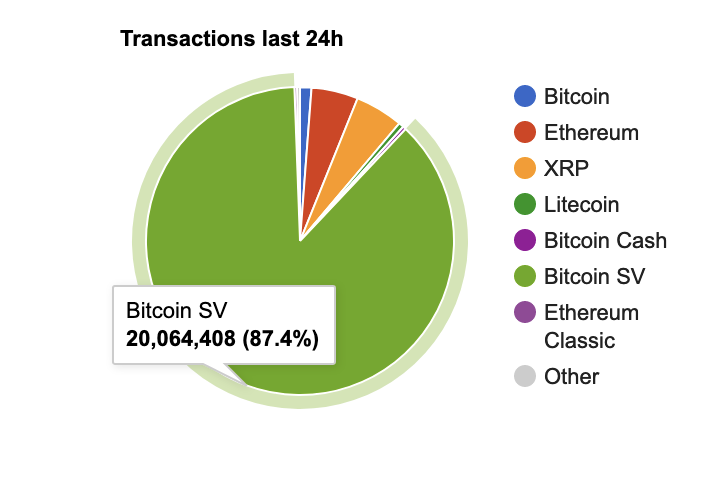 An upgrade at Fyx Gaming (makers of CryptoFights) was responsible for most of the new volume. Though Fyx’s transaction count is so massive it dominates the application pie chart over at BSVData.com, other heavy lifters in April included DuroDogs, ShowBuzz, PeerGame, TDXP, RelayX and Twetch.

Although gaming dominates current BSV transaction volumes, the inclusion of social media and financial apps in the mix means BSV’s ecosystem is more diverse than most other blockchains. For all the attention they receive in the mainstream press, blockchains like BTC and Ethereum remain limited in their number of use cases, mainly due to a lack of transaction capacity and high usage fees.

BSV does not lack transaction capacity. Ultimately, it will be able to process billions (even trillions) of data transactions every week—for any kind of application imaginable.

An internet based on data value, not ads

Data is the commodity that will drive the digital economy. However, the internet until now has failed to turn it into an economy that benefits everyone. Rather than enriching ordinary users and improving their lives, today’s internet has become an individual rights nightmare as large, already-wealthy corporate players harvest and sell their users’ private data to make their profits. This has also led to an environment where users can be banned and have years of data wiped for expressing opinions, while those remaining are bombarded with ever-more intrusive and annoying advertising. Despite all this, large media organizations have struggled to profit from their online content. Social networks have few other options to monetize the platforms they provide “for free.”

BSV proposes a different model, where ordinary users pay each other in millions of microtransactions. Users retain ownership of the data they produce; they can decide who may access it and for what price. The processors (miners) who keep the network secure earn a living from millions of tiny transaction fees (much less than US$0.01 each) rather than competing for diminishing “block rewards.”

Unlike other blockchains, BSV is not about “chasing quick bucks.” It does not rely entirely on speculative asset trading (a temporary phenomenon that can’t last forever) but seeks to create value from real interaction and exchange. It has unlimited use cases, but doesn’t fall on its face the first time one application becomes popular. It doesn’t have endless debates and new complications around new protocol rules, which are the same ones Satoshi Nakamoto set when he released Bitcoin in 2009.

While we mark this 20 million transaction-per-day milestone with satisfaction, it probably won’t be long before this figure becomes the daily average, rather than a one-off. Eventually, the number of transactions processed won’t even be news. This is what actual usage looks like, and it’s still the early days.

CoinGeek’s Kurt Wuckert Jr. recently joined Christopher Messina on the Messy Times podcast to discuss Bitcoin’s history, why big blocks are the way, and what Bitcoin SV is.

The NTS is also looking into individuals using digital assets to evade inheritance and gift taxes, as well as online platforms relocating their servers to tax havens.

Revati Nepal, chief of the currency management department at the NRB, said that the draft bill would be forwarded to parliament immediately after the central bank completes its internal discussions.

Despite approving its licenses, the Thai securities regulator still needs to inspect the firms' operations before they can kick off market activities, a report noted.