Home » Business » Solana liquidations are on the horizon

The recent problems digital currency borrowing and lending protocols have experienced are appearing in the Solana ecosystem.

Solend, the algorithmic, decentralized protocol for lending and borrowing on Solana that has over $1 billion in deposits, has been scrambling to mitigate the risks that are present on its platform.

The problems began on June 18, when Solend disabled USDC and USDT borrowing to “help ease utilization to allow users to withdraw”; however, users began reporting that USDC withdraws were not working.

USDC and USDT borrows in Main pool have been temporarily disabled.

This is to help ease utilization to allow users to withdraw.

The following day, Solend pinpointed the risk to a whale with “an extremely large margin position.” The whale had 5.7M SOL deposited ($170M), 108M USDC and USDT borrowed, 25% of TVL, 95% of SOL deposits (Main Pool), 88% of USDC borrows (Main Pool), and a liquidation price of $22.30—a price that SOL was rapidly approaching at the time Solend flagged this issue.

Solend spun up the first proposal for the Solend DAO to solve this problem. The proposal suggested that to solve the problem and to mitigate the risk posed by the whale’s position on the platform, Solend should be granted “emergency power to Solend Labs to temporarily take over the whale’s account so the liquidation can be executed OTC and avoid pushing Solana to its limits. This would be done via a smart contract upgrade. Emergency powers would be revoked once the whale’s account reaches a safe level.”

Although the proposal passed, it was met with a lot of pushback. To begin with, the DAO had a very short time in which they could vote on the proposal. Outside of that, Solend supporters and observers raised concerns about the community being able to take over another individual’s wallet through governance. While other’s pointed out that the approved proposal was the anti-thesis of decentralization, especially since one wallet address was able to account for the lion’s share of the “yes” votes. 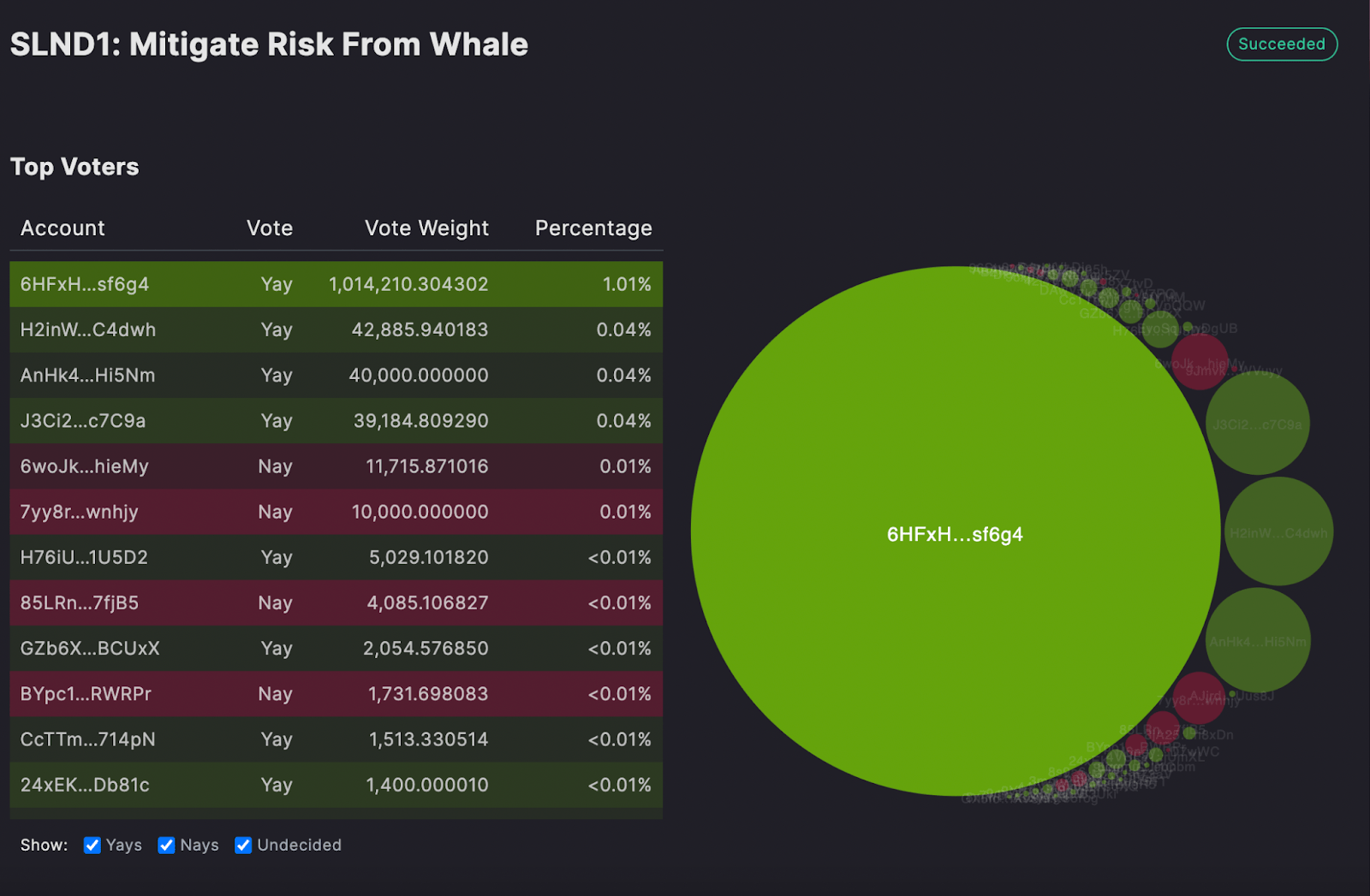 The Solend community’s concerns caused the Solend DAO to create a second proposal that invalidated the first proposal and extended the voting period—the proposal passed. Then, a third proposal was created that would alter the parameters around borrowing and lending on the platform to reduce the risk of a whale liquidation scenario having a domino effect on Solend’s operations and the Solana blockchain, without requiring Solend to take over user accounts. That third proposal is actively being voted on as of press time but is on track to pass. 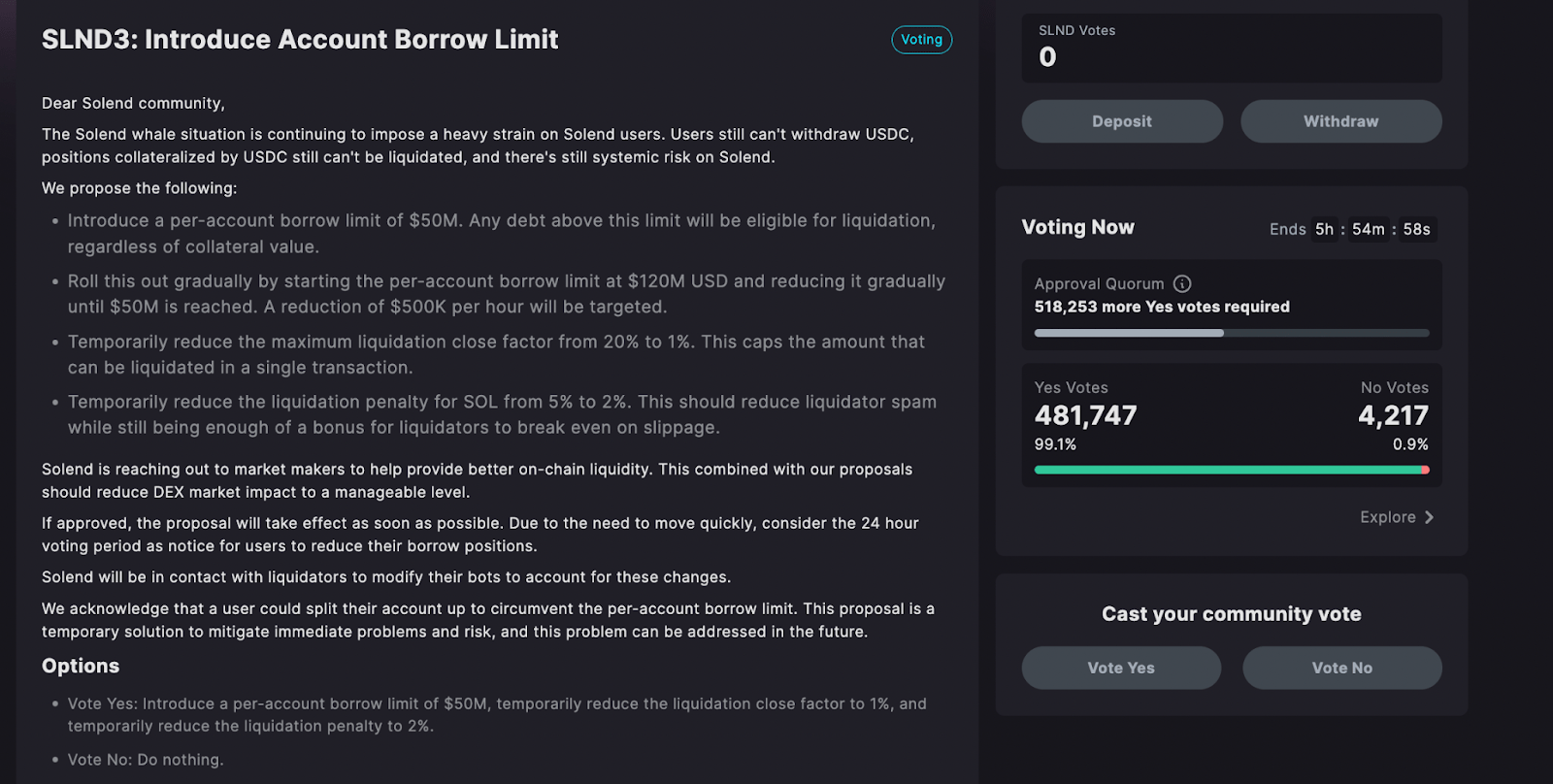 Solends problems and its proposed solutions highlight a more significant problem within the digital currency ecosystem—flawed business models that rely on high-risk economics/tokenomics and a lack of decentralization.

Price-sensitive business operations that incorporate forced liquidations are proving to be poor business models that carry high degrees of risk. In the last few months, we have seen digital currency protocols and funds get blown up because of these models.

On top of that, Solend’s voting results and the Bitcoin businesses that have been blown up or in financial trouble have revealed how much of the digital currency space is centralized or interdependent on the success of other players in the sector.

The more companies that find themselves having to liquidate positions and sell assets because they are in financial trouble, the lower the price of most coins and tokens will go, which will put other Bitcoin-native firms at risk of running into the same liquidity problems that lead to the forced selling of coins and tokens to remain solvent. As a result, many companies, including Solend, scramble for solutions as they inch closer to financial crisis, insolvency, and bankruptcy.

Follow CoinGeek’s Crypto Crime Cartel series, which delves into the stream of groups from BitMEX to Binance, Bitcoin.com, Blockstream, ShapeShift, Coinbase, Ripple,
Ethereum, FTX and Tether—who have co-opted the digital asset revolution and turned the industry into a minefield for naïve (and even experienced) players in the market.