The culture of amateur trading and investment is toxic. In the Bitcoin economy, Bitcoin SV advocates want to see the protocol used to open up new markets and create economic value which was previously impossible with the poorly connected, centralized networks of yesterday. By creating fundamental economic value and disrupting existing players in the data, finance or settlement economies, the purchasing power of Bitcoin SV “coins” should steadily increase. In contrast, the small blockers either want you to “buy BTC” or else they want you to “stay poor.” No other work needed. Buy BTC, wait for other people to buy BTC, sell at some undefined point in the future—the monetary revolution for people who pretend that Bitcoin is “savings technology” and nothing else. 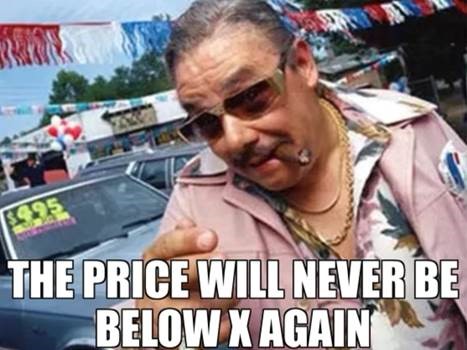 What people do not realize is that this toxic rhetoric is actually a boiler-room sales tactic where people are socially engineered into being fearful that their lack of action (in this case, buying BTC) will lead them to future regret. This is a shady sales tactic no matter when it’s used, but it is actually illegal in nearly all circumstances when the thing being pushed is an “investment opportunity.”

“In the 90’s” there was an explosion of penny stock pump-and-dumps, boiler rooms and an IPO bubble. Then came the “Dot Com” bubble, and by the year 2000, it burst. But investment scams didn’t stop there. The housing bubble heated up in the early 2000’s, and scammers set up real estate investment schemes all over the world.

“Investment Property With No Down Payment” was a killer sales pitch, and a lot of people got rich selling courses for building pyramid schemes to “teach” people how to invest in real estate. Before anonymous accounts on Twitter were pumping the “largest transfer of wealth in a generation,” there were late night infomercials promising aspiring entrepreneurs that wealth was just on the other side of a book, CD program or the penny stock pink sheets.

By the end of it all, The Wolf of Wall Street went to prison, and so did Bernie Madoff. But there is a new fool born every day, and new bubbles to embroil them into.

Bitcoin started to become a speculative asset in 2012-13 as monetary activists arrived with a skewed version of Austrian economics likening Bitcoin to gold. After years of debate about Bitcoin’s usefulness as cash, the big blockers left with the original Bitcoin protocol in 2017. The small blockers sang a song of relief as the tether floodgates opened, and BTC’s narrative as a pure investment tool came into full fruition.

Institutional traders like CME Group and CBOE joined the fray of early adopters like Grayscale, and 2017 saw an all-time high of about $20,000 for BTC. With the BTC price bullish, 2017’s sympathizers to big block Bitcoin had to choose between their morals and their pocketbooks, and the old guard of Bitcoiners had to decide which side of the split to support.

BTC today: Has anything changed?

With small blockers like Tone Vays and Adam Back offering classes on “how to hodl,” the investment scammers are in full force on BTC going into 2021, and nobody should expect that to change. With their “Buy Bitcoin” narrative and all of the old tools from the pump-and-dump 90’s, we have to deal with their cringe-worthy artwork until further notice. 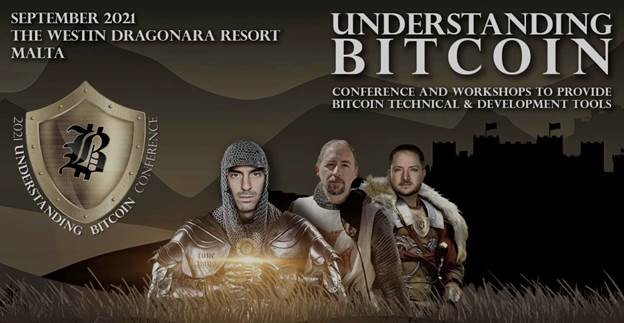 But shouldn’t number go up?

Yes, as stated earlier, sound money should accumulate purchasing power relative to the value that it absorbs from its use as a tool in the economy. Money, after all, should be exchanged for goods, and its price discovery versus all other assets in the economy is relative to the things that it can buy. But that isn’t happening with BTC (or any other blockchain-based digital currency). In the BTC economy, nearly all movements are between exchanges where traders are looking to trade for fiat profits and little else. On the fiat side, BTC is seen as a sort of “savings technology” or a store of value, while all other activity is frowned upon.

This is plainly because BTC cannot handle business usage, and so the block space needs to be kept safe for big investors to be able to send big transactions to exchanges.

Somewhere in the malaise of the Bitcoin Civil War, the definition of “sound money” was redefined as something that was non-confiscatable and infinitely auditable, but all other aspects of money (including its ability to buy things in the economy) were thrown out. Anyone who thought Bitcoin should be used for commerce was black listed or harassed. “Stay poor” became the criticism toward people who thought Bitcoin should be used to generate wealth rather than just absorb it, and now we have mass confusion living on the lands that should have been conquered by bitcoin about ten years ago.

Sound money is durable, meaning it is unchanging. Traditionally this means it is a durable commodity such as gold. However, it can also mean an asset pegged to a more durable asset, although that introduces third party risk. Bitcoin sought to replace this risk by having the durable properties of a commodity with the frictionless properties of a digital payments processor. The Bitcoin white paper explains a lot about ways to verify the ownership of coins for durability, but it also reads heavily on the subject of lowering “the cost of mediation” in order to lower “the minimum practical transaction size” so that Bitcoin could be used “for small casual transactions” to revolutionize “commerce on the Internet,” for anyone willing to read Section 1.

So how do we separate Bitcoin from its toxic investment culture? The shortest answer is to do commerce in Bitcoin. Build on Bitcoin in ways that the old world economy can’t compete with, and the value will go up!

But it is important to remember that just because Bitcoin SV is Bitcoin and therefore has incredible superlatives as a means of exchange, it should also be a store of value and outperform lesser forms of money like the U.S. dollar. It has done this handily in 2020. 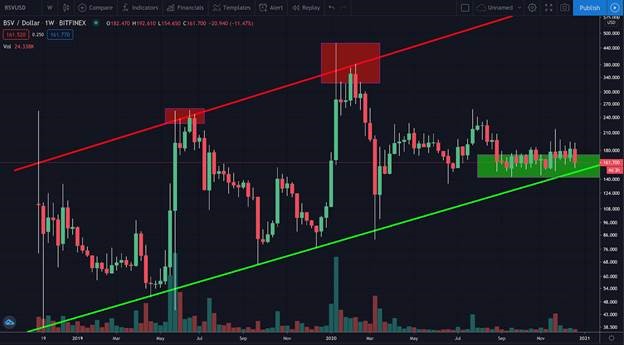 Bitcoin SV, since the split of November 2018, has established itself into a healthy bullish trend against the dollar, signifying its real value in the economy relative to its ability to create value.

While performance is considered, it’s also crucial to stress the need for an incredible amount of economic cooperation to make Bitcoin SV even more valuable. We need everyone to use the network in a way which creates surpluses (profits), and we need that value to be created more efficiently than it could be in other places. We want people to want to save their BSV, but also have so many opportunities to buy incredible things on chain, that they feel compelled to invest in other growth opportunities and exciting consumables so that they invest and create exponential value with the protocol that spills over to make the entire world richer.

We can all be rich because of the Bitcoin protocol, but this is not an investment pitch. It is a message of hope wrapped into a challenge to work hard so that the reward is worth the journey. The Bitcoin Civil War may never be over, but if our goal is prosperity, we just might achieve peace.

And as we work to make Bitcoin SV a tool for freedom and wealth, remember what we are up against: people who want to get rich on BTC while they want you to “get rekt and stay poor.” 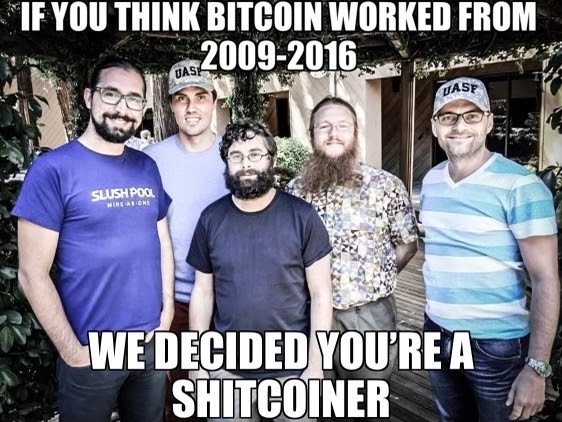 The story of the BSV/BCH hash war is a brutal chapter in Bitcoin, and it laid the groundwork for much of what has transpired since, but that story has been told a few times.