With the protocol upgrade now behind us, the Bitcoin Cash (BCH) network is all set for the final part of the Bitcoin Cash Professional Stress Test, the biggest test ever conducted on a public blockchain.

The team behind Stresstestbitcoin.cash, which operates independently of the BCH implementation groups, will run the main test on November 17 at 12:00 UTC with a goal of processing over 24 million transactions within a 24-hour period on the main BCH chain to showcase the network’s current capacity. On its website, the team said the stress test “will be a positive signal for merchants, businesses and investors, giving them confidence in the Bitcoin BCH network and its ability to scale on-chain.”

During this test, SVPool and BMG Group successfully generated five full 32MB blocks—proof “that there are mining systems on the BCH network today that are ready to mine blocks larger than 32MB,” according to the pre-stress test report. SVPool, a personal initiative of Dr. Craig Wright, and nChain’s BMG Group run Bitcoin SV (Satoshi Vision), the full node implementation designed to fulfill the vision set out by Satoshi Nakamoto’s original Bitcoin white paper. 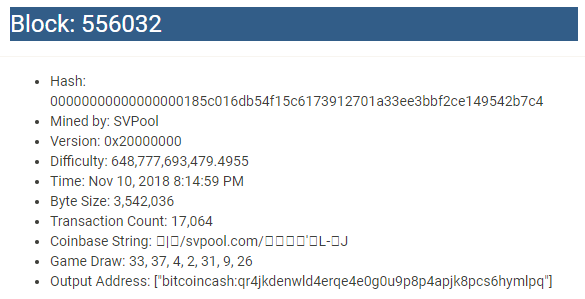 Unlike other competing BCH implementations which seek to make unnecessary changes to Bitcoin, Bitcoin SV’s roadmap is to restore the original Satoshi protocol, keep it stable, enable it to massively scale, and allow major businesses to confidently build on top of BCH.

Of the five 32MB blocks, four were generated within less than one hour. The team stressed, “These 4 blocks were all mined by BMG pool in rapid succession showing that their infrastructure is ready for blocks larger than 32MB.” Other mining groups that use Bitcoin SV—CoinGeek and SVPool—also mined very large blocks during the pre-test. SVPool mined a 20.6MB block, and CoinGeek mined a 15.4MB block.

Based on the pre-test results, it’s highly recommended that everyone get ready for the main stress test event on November 17 by running Bitcoin SV. After all, the preview test has already confirmed that Bitcoin SV is correct about its scaling roadmap: the BCH blockchain can handle much larger blocks and can more quickly scale for big enterprise use.

And after the BCH Professional Stress Test, come to the CoinGeek Week conference from November 28-30 (with a special advance Miner’s Day on November 27)—it’s the perfect venue to meet the thought leaders and discuss the implications of the world’s first Bitcoin Hash War fought according to Nakamoto Consensus.