This past September, a stress test of the Bitcoin BCH blockchain was held. The results were more satisfactory than many had expected, with 10 megabyte (MB) and 21MB blocks mined. By the end of the test, 2.1 million transactions were completed and Bitcoin BCH accounted for over 60% of the crypto traffic over the period the tests were conducted. In preparation of another stress test on November 17 by the same group who ran the September test is behind the current test. The stress test is run by Stresstestbitcoin.cash and operate independently with any of the full node implementation groups.

As seen in the mining charts below, a number of blocks measuring 32MB were mined. This is important, as it shows that the professional mining efforts are more advanced than others, and that it is capable of routinely mining larger blocks. (Click here for full-size version of this graphic.) 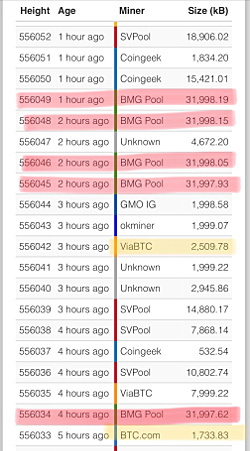 In the graphic at right, you can see other mining groups that run Bitcoin SV – SVPool and CoinGeek – also mined big blocks that were 20.6 and 15.4MB in size.

Some will try to argue that large block mining is irrelevant because cryptocurrency has yet to make a significant penetration into the merchant ecosystem. However, this is a fallacy and the mentality of procrastinators who don’t understand the importance of having the system ready before it’s needed -not after. By developing the network now and looking toward the future, there won’t be a need to scramble at the last minute to introduce changes.

Everyone, at some point or another, has become frustrated in a shopping experience because the retailer wasn’t prepared for the response it received. Lack of preparation leads to delays in purchasing, delivery, loss of revenue and a generally poor customer experience. All of these can be avoided if the network is prepared ahead of time.

Being able to demonstrably prove that the Bitcoin BCH network is capable of massive amounts of simultaneous transactions will show the world that it is capable of leading the way toward wider acceptance of cryptocurrency for its original purpose – a peer-to-peer currency that is meant to give control back to the money holders.