In April 2019 two of the biggest crypto exchanges—Binance and Kraken—delisted Bitcoin (BSV). At a first glance it may appear that this decision was driven by objective criteria and entrepreneurial freedom. However, it was none of that—it rather revealed collectivism peppered with blatant lies.

Both exchanges publicly stated their reasoning behind the delisting. Binance came up with “various factors” that drive the decision whether to delist a cryptocurrency.

These “various factors” may sound reasonable, but were mere excuses for a collectivist approach to the growing success in BSV. Let us go through the points at lightning speed:

Commitment of team to project? Given in BSV 100%.

Level and quality of development activity? Given in BSV 100%.

Level of public communication? Given in BSV 100%.

Responsiveness to our periodic due diligence requests? No problem if asked for.

What about the last two points: Evidence of unethical / fraudulent conduct? Contribution to a healthy and sustainable crypto ecosystem? This is where the collectivist mindset of Binance kicks in for the first time. Ethical behavior and healthy contribution to what? To the group. To the tribe.

The real reason for the delisting was published by CZ himself days before coming up with the cited “various factors“: 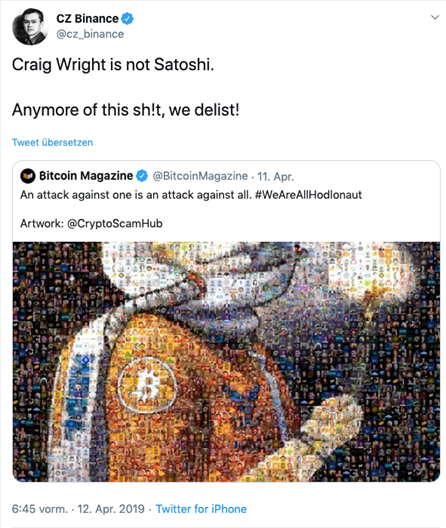 It was not at all about the cited “various factors,” but about legal actions Dr. Craig Wright took against certain Twitter trolls. CZ did not approve of the legal dispute and therefore delisted BSV. How is that collectivism, one may ask? Is it not just a thing between CZ and Craig Wright?

Binance did not delist Craig Wright as a user of Binance, but the coin BSV, and with it, everyone involved in BSV. Whoever did hold BSV at this time was touched by the delisting without having anything to do at all with the causes. This is a form of collective punishment known from middle ages where uninvolved persons like family members were held liable for their relatives’ actions. Pure collectivism at work.

What was CZ actually pointing out with his twitter post and the delisting of BSV? He was warning the individual (Craig Wright) not to disturb the harmony of the group (crypto Twitter sphere). This is what collectivism actually is—the individual has to step back even if he just asserts rights legitimately. What is even more frightening is the fact that CZ judges actions taken by individuals within the rule of law as a danger for the group/tribe. The irony though: now CZ himself seems to want to sue a crypto media outlet for “fake news.”

We will be suing them.

Critics of collectivism argue that it eventually silences individuals and ends up in totalitarianism. Wherever collectivism in a political form accrued historically, personal freedom and free market faded. This is what happened to BSV in the delisting spectacle—big exchanges trying to censor BSV development and with it everyone involved in BSV.

It is not just that. Kraken used a Twitter poll to “let people decide” about the delisting:

This is collectivism again, where neither objective factors, nor the rule of law protecting individuals count, but group thinking as straight out mob mentality. Kraken stated their reasoning behind the delisting, saying that “bad actors” are to be cast out of the crypto cosmos:

Here we go again: individuals being targeted for the group’s sake. A totalitarian testimony.

Why would anyone not involved in BSV care about all of that? This kind of collectivist mindset behind the leading figures of big exchanges must alarmingly concern crypto investors.

For investors, collectivism is a risk. Usually Binance and Kraken should have a vital interest in offering as many trading pairs as possible, especially concerning top 10 coins like BSV. By accumulating trading fees for each successful trade is how they profit as companies. So both exchanges actually acted against their own business model by delisting the tradeable asset BSV. Do investors really want to be connected in any way to companies that do not even follow their own business model?

It is not only the collectivism shown by Binance and Kraken, but also their lies about the decisions made. They never sincerely evaluated the potential of BSV. Instead, they made up reasons to delist it, while it was clear from the very beginning that these considerations were lead only by an antipathy against the person Craig Wright. Obviously they do not seek honesty and real development in blockchain terms, but a collectivist agenda. Users and investors are to wake up to the fact that these exchanges are not lead by free market thinking or truth.

More than half a year later, services such as Abra, NiceHash and ViaBTC recently added BSV support, respectable exchanges like KuCoin and Huobi now offer BSV trading pairs, and now, BuyBSV.com is bringing Bitcoin SV to more countries. What will Binance and Kraken do after 2020, when BSV shows itself as the only scalable blockchain project, secured by a vast patent portfolio? In order to stay relevant, they will have to relist BSV and lie to their users once again in the process.