Get those Bitcoin Core (BTC) supporters and Bitcoin Cash (BCH) proponents out on a leisurely cruise from Barcelona, on to Monte Carlo, France, Italy, to Ibiza and back again to Barca over five days, and they’ll cool way out. That idea lasted a full 30 seconds, and then all hell broke loose.

First, a disclosure: I am a paid shill, a full-on fanboy of Roger Ver. I think he’s a heroic figure, one seldom appreciated. I won’t toady it up and insist he can do no wrong, but even when he’s wrong-ish, he’s almost just about right. I also used to enjoy Jimmy Song’s YouTube episodes about coding and his program, Morning Brief. Mr. Song and I agree quite a bit on economics and political worldview. There is a lot to like about him. Oh, I am paid in Bitcoin Cash (BCH).

Before the formal debate had even begun, stage right, off the platform, Mr. Song was holding court, as an Eazy-E circa early NWA looking Roger Ver and a gaggle of folks wearing BCH PLS t-shirts leered on. Mr. Song, decked out in a multi-gallon cowboy hat, sports coat, and matching suit attire, animatedly accused Mr. Ver of stacking the crowd with BCH supporters. He frantically pointed to them one by one, angrily insisting the fix was in.

And maybe it was, crowd wise. But, then again, video audio can be heard clearly enough, a tad later in the debate, how a healthy gaggle of Mr. Song supporters managed to find their way poolside. So maybe Mr. Song was making something out of nothing, fighting nerves. That normally relaxed Jimmy Song face, easy smile, was gone. It was replaced by someone who very much felt wronged, and wronged from the outset. 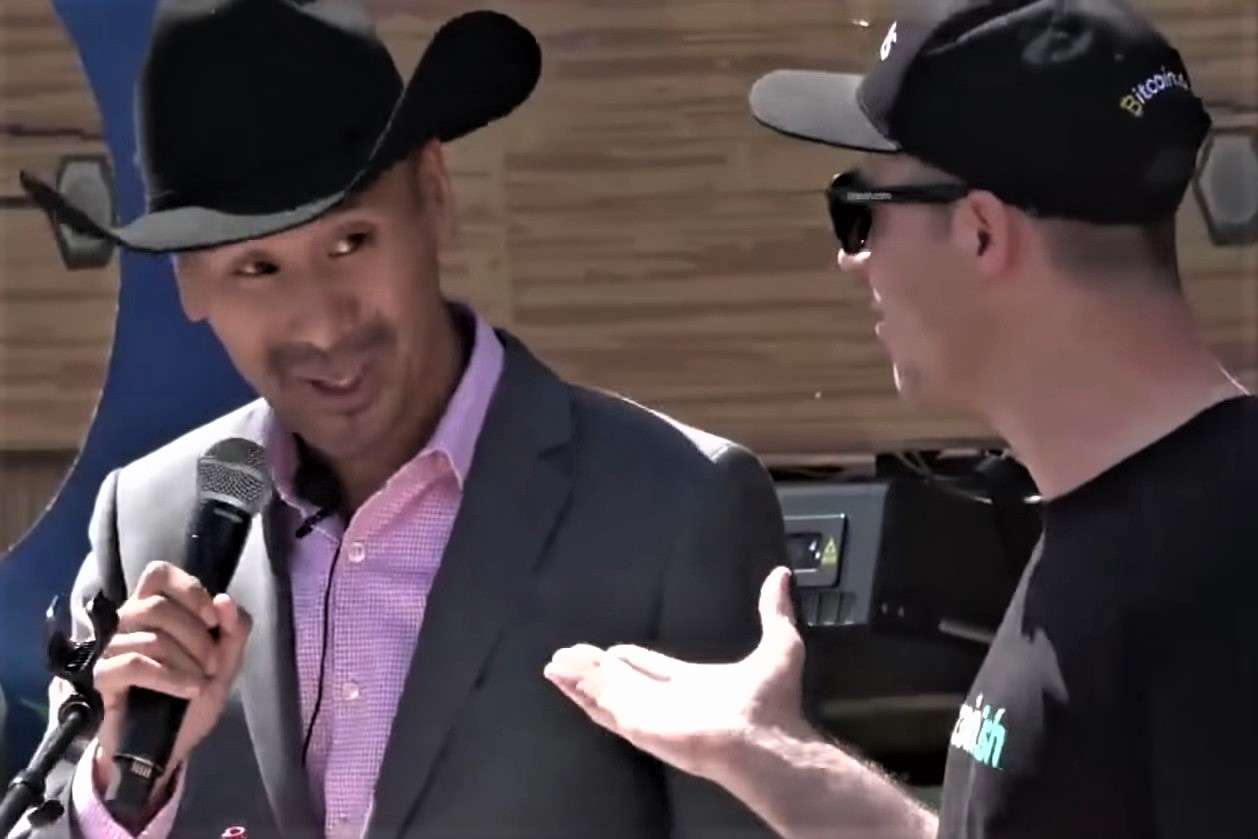 The two men managed to hammer out to their satisfaction enough to ascend the stage. A lone podium with a single microphone was between to chairs—Mr. Song, back and to stage right; Mr. Ver, stage left, immediately to the left side. Mr. Ver wore a snapback baseball cap, black, with BCH PLS embroidered atop. He also hid behind very black sunglasses and a wry smile as he sat, giving Mr. Song the floor.

Jimmy Song came prepared. He whispered something about a page missing from his prepared remarks, and then appeared to attempt wrestling a format structure to the debate. Almost immediately, Mr. Ver, still seated, offered mild protest about not having agreed to any such format, nevermind a “Lincoln-Douglas” style exchange.

This Song is done

It wasn’t too much longer when Mr. Ver decided to stand and talk over Mr. Song’s presumption at an agreed-to format. Roger Ver teased at grabbing the microphone, and Mr. Song dutifully un-holstered it from the podium, away from Mr. Ver. The two men argued more about time and whether Mr. Song’s introduction of the format constituted his introduction or counted against Mr. Ver’s time. Exasperated, Mr. Song’s face shook, and he threatened to not debate should this persist.

A few exchanges more, and Mr. Song exited for the first time. He diva’d, almost hopping, off the stage in a huff. Mr. Ver commandeered the microphone, explaining the ambush Mr. Song complained of was actually happening to him. Mr. Song had rigged the format to suit his debating style, and without consulting Mr. Ver. After having said his peace, Mr. Ver essentially begged Mr. Song back to the stage, “C’mon Jimmy!”

Protestations more, and Jimmy Song did return. He moved to the podium, categorically insisted this to be the reason no one wants to debate Mr. Ver, and set about making his case as to why Bitcoin Cash is fiat money. Graciously, Mr. Song began, “I’d also like to thank Roger Ver, particularly for his early evangelism of Bitcoin. We may be debating today, but there is a lot that we do agree on philosophically and I admire your contributions toward the cause of liberty.”

Pleasantries dispensed, Mr. Song began to lay out a case Bitcoin Cash as it is presently configured behaved much like government money, specifically following along the lines of mid 20th century English economist John Maynard Keynes. Mr. Song insisted, “The economic philosophy of BCH is Keynesian in that central authorities intervene to ‘spur innovation’ or ‘solve problems’. The method of payment use case has been subsidized by central authorities through large blocks, despite all market signals to the contrary. My opponent says things like ‘transactions should be free’ as if they’re entitlements. The smart contract use case has also been subsidized by central authorities, despite there being very little utility or demand for such a thing. BCH is very much paternalistic.”

He further explained BCH was centrally controlled by a large mining concern, one that attempts to peg it to BTC, a policy Mr. Song concluded has done little but fail. “BCH is a fiat money, and their main appeal is that they’ll be better than the fiat central bankers that you already know,” he stressed. “The promise of BCH is governance as a benevolent ruler versus granting you self-sovereignty over your own money. This is the major difference between BTC and BCH and is the reason why BCH is no different than any altcoin.”

At almost exactly 16 minutes into the debate, Mr. Ver offered his rebuttal. After reminding the assembled this was not an agreed-to format, Mr. Ver dismissed Mr. Song’s thesis as “a bunch of nonsense.” Mr. Ver then went on to offer a confidence play, a challenge. “I’ll bet a million dollars in whatever cryptocurrency you want that within 10 years Bitcoin Cash will have a larger market cap than the BTC version of Bitcoin today. I yield the rest of my time to you, Jimmy.” 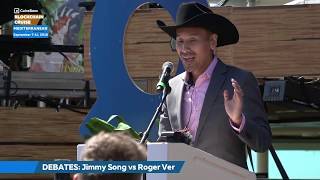 Very much stunned by the offer, Mr. Song once again regained the microphone. Since Mr. Ver didn’t address his points one by one, Mr. Song decided Mr. Ver had conceded that much of the debate. Mr. Song then continued reading from his prepared remarks, pouding home the point BCH was centralized.

One of the key points of centralization, Mr. Song said, was the very contentious debate happening within the Bitcoin Cash universe at the moment. Normally once aligned forces were now at one another’s throats, Mr. Song said. This was evident the factions were fighting for control. And if something can be controlled, that means it is too centralized.

This Song is done, again

Roger Ver again took his turn, and immediately reversed the claim. It is precisely the sign of a vibrant, healthy community when different ideas can be debated and discussed, he answered. Even when the debates run hot, Mr. Ver said, people have the chance to humble themselves and listen.

He said BTC was so centralized, so controlled, developers and those challenging their assumptions have been literally banished. The consensus among BTCers, in fact, was a sign of centralization, of control. Mr. Ver then pointed to his favorite target, the Reddit sub forum r/bitcoin. 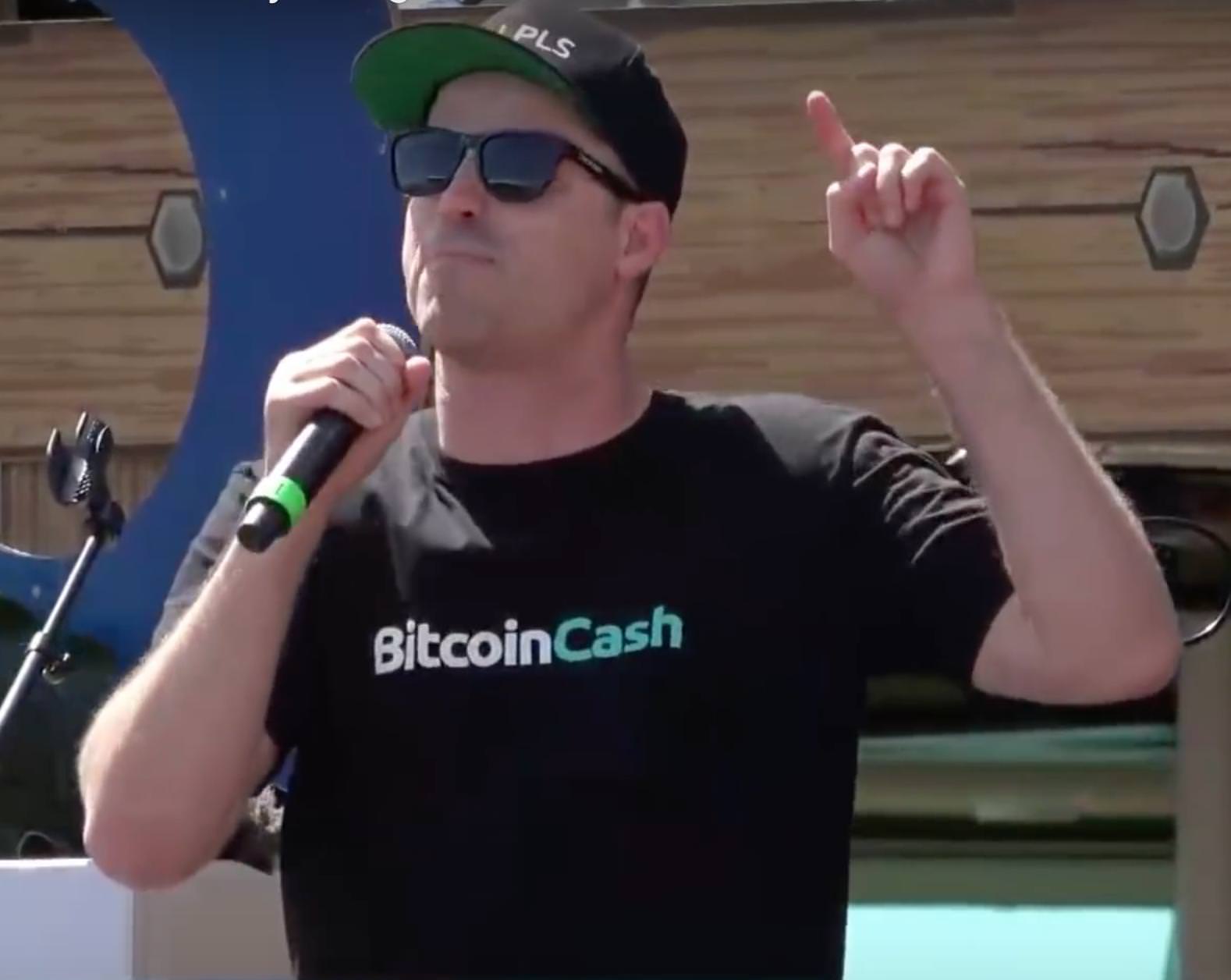 BTC proponents have silenced BCH voices among them, Mr. Ver said, and wasn’t this a sign of a closed, unhealthy community. And as to its being a fiat currency, BCH is exactly the opposite, Mr. Ver maintained. A primary definition of a fiat currency is its being dictated, its use mandated by government force. Enthusiasts have literally thousands of choices among cryptocurrencies, and BCH is just one. “Cryptocurrencies are the currencies of freedom!” he shouted.

Mr. Song regained the podium, reading from prepared remarks. He attempted to fit those into the context of the debate, mentioning many times BTC is a meritocracy and how no one was entitled to be heard in the community. Mr. Ver then responded by suggesting he hadn’t argued for entitlement but more for an ethos, a way of acting inside the space. That it has changed in favor of one group to the exclusion of any other voices troubled Mr. Ver. The rest of what was to constitute the debate actually turned interesting, as the two men traded questions and answers between themselves. At the 44-minute mark, Mr. Song announced he was finished, disgusted, and he left unceremoniously. A member of the crowd jumped on stage in proxy. This Song was done, again.