Never forget that Tether used to tell you that it was 100% backed by U.S. currency, and it was only after an investigation by the New York Attorney General (NYAG) forced its hand that it ever admitted that this wasn’t the case.

With that in mind: last week, Tether apparently released the first of its AG-mandated reserves reports to the world. This is required by Tether’s settlement with the NYAG, the company must submit one each quarter for the next two years. I say apparently because what Tether actually released is a one-page document containing two pie charts: one which shows the makeup of Tether’s reserves as being 74.85% “cash & cash equivalents,” and another which further breaks down what ‘cash and cash equivalents’ means.

The breakdown is provided without context and without any note as to how the figures were calculated, as you might expect from something prepared by a third-party accountant. There’s also nothing explicit to say that this is what Tether submitted to the AG as part of the settlement. As presented, the numbers tell us virtually nothing concrete about the actual breakdown of Tether’s reserves.

With that in mind, what is Tether trying to tell us with these figures?

The 75.85% figure is in line with the 74% given by Tether general counsel Stuart Hoegner in his affidavit to the New York Attorney General’s office. However, the breakdown of “cash and cash equivalents” represents another surreptitious walk-back of representations previously made by the company: only 3.87% of this category is constituted by cash, meaning cash accounts for a measly 2.94% of Tether’s entire reserves: 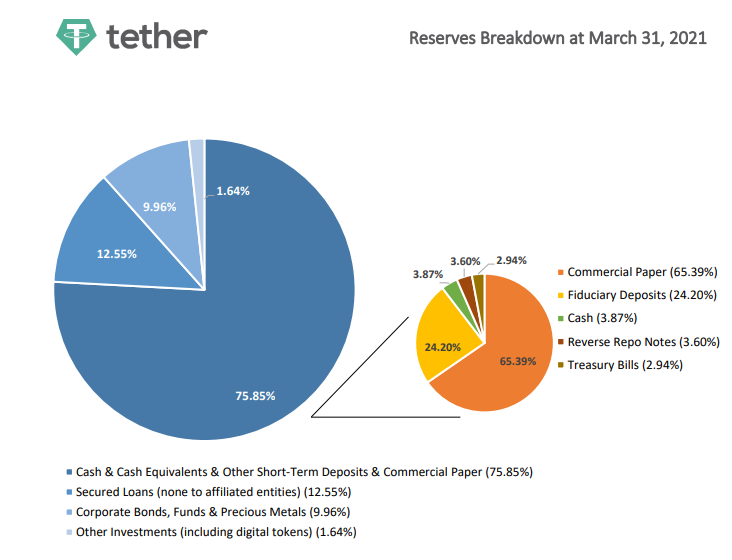 This is a far cry from the days when Tether was trying to convince us that every tether in circulation was backed by a matching U.S. dollar.

The other items listed in the breakdown, such as the 65.39% worth of “commercial paper,” are next to meaningless in this context (what little there is to speculate about isn’t encouraging). Had Tether released a third-party audit of its reserves—as critics have consistently asked for – we would be able to tell from disclosures made in the report and the accounting standards used exactly what these items constitute. As this is no more than two barely annotated pie charts, we cannot guess. There is so much room for interpretation within a phrase like ‘commercial paper’ that without a definition, it is meaningless.

So, while the statement “Tether is 100% backed” may be trivially true in that Tether issues USDT and also holds assets of some kind, this is not what Tether means when it calls itself a ‘stablecoin.’ When a digital asset holds itself out as a ‘stablecoin,’ what matters is exactly what that coin is being backed by. If that backing only amounts to less than 4% cash, with the rest of the backing still practically unknowable, in what sense can tether ever be considered ‘stable’?

It appears that the only purpose this publication (and Tether’s prior attempts at transparency) is meant to serve is providing Tether’s uncritical supporters a headline from which to argue on Twitter, distracting from the truth: that we still know almost nothing about Tether’s reserves.

General counsel Stuart Hoegner has become the de-facto spokesperson for Tether, particularly when the question of its backing is concerned. In one way, this makes sense. As their general counsel, it’s only natural that Hoegner would take point in conversations with regulators and law enforcement. On the other hand, is it appropriate for Tether, via their in-house lawyer, to not only refuse to acknowledge the true details of the settlement with the NYAG, but actively misrepresent it? Almost every representation Tether has made as to its reserves has been misleading if not an outright lie, and that includes those which have come directly from Hoegner.

Hoegner’s public statements on Tether follow a clear pattern. Whenever the company is backed into a corner or when skepticism as to tether backing reaches a peak, Hoegner will pop up on a podcast or release a statement assuring everybody that everything is okay and that any implication that Tether is being dishonest is nothing but FUD. He’ll do this even when publicly available evidence directly contradicts his assurances.

This exact pattern has already played out with Tether’s pie chart document. Less than a day after it was published, Hoegner wrote a 1,400-word Medium post entitled ‘Tether is Setting a New Standard for Transparency – and Responding to Criticism That is Untethered From Facts’. In it, he complains that sceptics of Tether’s so-called “proof” of backing are “moving the goalposts” and “spreading patently false and misleading misinformation and outlandish conspiracy theories.”

This is a rich position for Hoegner to take, considering that same Medium post also says this:

“After an extensive investigation for more than two years and reviewing more than 2.5M documents provided by Tether and Bitfinex, the New York Attorney General’s Office made no negative findings whatsoever that tethers were not fully backed, nor were ever issued without backing.”

This is an outright lie. The settlement agreement between Tether and the Attorney General’s office, signed by Tether and Bitfinex, is explicit:

“Because of Tether’s inability to conduct significant banking activity during this time, it could not itself hold dollars sufficient to back the hundreds of millions of new tethers that had entered the market. Until September 15, 2017, the only U.S. dollars held by Tether ostensibly backing the approximately 442 million tethers in circulation was the approximately $61 million on deposit at the Bank of Montreal.”

“As of November 2, 2018, tethers were again no longer backed 1-to-1 by U.S. dollars in a Tether bank account, because a substantial portion of the backing… had been transferred to Bitfinex to make up for the funds taken by Crypto Capital.”

It was only after this period—and after the opening of the NYAG investigation—that Tether would surreptitiously walk back its promise to be fully backed by fiat. Its website was quietly changed in February 2019 from saying that “every tether is always backed 1-to-1, by traditional currency held in our reserves” to “traditional currency and cash equivalents and, from time to time, may include other assets and receivables from loans made by Tether to third parties.” The change was not announced by Tether despite being a significant departure from the position it had been insisting upon to that point. Instead, shortly after the change, Hoegner submitted an affidavit to the NYAG in which he admits that tethers are only 74% backed by currency or cash equivalents.

Hoegner told The Block after the charts’ release that “readers should not confuse items not in ‘actual cash’ with a lack of liquidity”—but just two years ago Tether was claiming that each token was 100% backed by currency. The goalposts are indeed being moved, but it isn’t by Tether’s critics, as Hoegner would have you believe. They’re being moved by Tether and Hoegner every time their claims about tether backing can no longer be reasonably believed.

Tether’s motivations for this are obvious. It only needs to continue giving its supporters enough evidence for them to carry on believing that each tether has real world value. It never needs to prove this practically, as despite there still being no record of anybody being able to redeem their tethers for currency, people are still buying tethers.

But what’s in it for Hoegner? It must be exhausting having to perpetually contradict your previous statements on the subject, especially when those prior misrepresentations draw the ire of the authorities, as they did with Tether in New York. Perhaps Hoegner is the unwitting patsy, forced into being the public face of Tether’s continually shifting goal posts to draw attention away from the people in charge.

To paint him entirely as a lightning rod for Tether brass wouldn’t be doing Hoegner justice, however.

Tether has at various points attempted to claim tens of millions of dollars as part of its backing reserve, which, in reality, were held in an account Hoegner’s name, not Tether’s. This was reported by Bloomberg in 2018 and was confirmed by the NYAG investigation, and took place in the era when each tether was supposed to be being backed 1:1 by U.S. currency.

Then there’s Hoegner’s own professional history, which includes a role as deputy general counsel and director of compliance for Excapsa, founders of online casino UltimateBet. Excapsa sold UltimateBet in 2006, but the site collapsed in 2008 when it was revealed that Excapsa employees were cheating on the platform, both pre-sale and post-sale. Excapsa’s general counsel, presumably Hoegner’s boss, was Daniel Freidberg. Friedberg has been implicated in the cheating scandal, and despite working on behalf of UltimateBet in the company’s sale, began working for the buyer almost immediately post-transaction, which seems to be a highly unsatisfactory conflict of interest. Nonetheless, nothing came of this.

There’s also Hoegner’s Medium post, which brazenly mischaracterizes the outcome of the NYAG investigation in much the same way that Tether’s press release at the time of the settlement did. Like his bosses, Hoegner knows that those who have supported Tether to this point will believe more or less whatever he tells them. This is why it’s possible for Hoegner to feel comfortable writing 1,400 words on Medium without acknowledging that the NYAG’s investigation found that tether has not always been backed, or Tether’s continued failure to provide a third-party audit of its reserves.

While it’s interesting to ponder Hoegner’s motivations, it ultimately doesn’t matter. The fact is that Tether regularly uses Hoegner to put a more credible gloss on the company’s ongoing campaign of deception and obfuscation regarding its reserves. Thanks to the likes of the New York Attorney General’s Office, Tether is rapidly running out of room to lie as the excuses become more and more feeble, as shown by Hoegner’s laughable attempt to spin the NYAG’s investigation and Tether’s latest non-proof into something that Twitter can grab a hold of.

What will be interesting to see is whether these pie charts are what Tether actually submitted to the NYAG in compliance with February’s settlement and if not, whether the real reserves breakdown will be ever see the light of day.

For anyone still not getting it:
This is the countdown for the deadline when they have to supply the documents.

Give the NYAG some days to analyze the data and come out with an official announcement. https://t.co/OrE40cUgHq

Follow CoinGeek’s Crypto Crime Cartel series, which delves into the stream of groups—from BitMEX to Binance, Bitcoin.com, Blockstream, ShapeShift, Coinbase, Ripple and
Ethereum—who have co-opted the digital asset revolution and turned the industry into a minefield for naïve (and even experienced) players in the market.

Revolut was the only firm on the FCA’s temporary registration regime and is now licensed to offer digital asset trading and custodial services in the U.K.

James Powell, backed by prominent financial regulators, highlights the need to enforce appropriate directives to deal with "issues" concerning DeFi before they snowball and create a big mess.

While being on the App Store opens up any NFT marketplace to billions of users, startups are up in arms over the 30% Apple cut, which they say is unsustainable.