This post originally appeared on the Unbounded Capital website, and we republished with permission from Sina Nazari & Zach Resnick.

At Unbounded Capital, we are convinced that the future of blockchain largely belongs to a highly scalable blockchain. After years of research and major pivots in our investment focus, the only blockchain we think that has a chance of scaling to meet global demand is Bitcoin SV. We are constantly looking to see if there are other emerging scalable blockchains that could match or surpass all that Bitcoin SV has accomplished to date, and we are excited to finally be making much of our internal research available to the public.

We went to great lengths to acquire the data we have, not just scouring every possible price of public and paid potential data source. For example, to acquire Solana’s data, we reached out to the Solana Foundation, Solana’s co-founders, and leading investors in Solana’s blockchain, but there were either crickets or responses that indicated this data doesn’t exist.

We would appreciate it if you, as a reader, could help us find a source of raw data for Solana, Avalanche, and other blockchain networks processing many transactions that we could leverage for this analysis. Any support or feedback on this research would be greatly appreciated: [email protected]

We will add the data for more blockchains as the data becomes available. In the coming months, we will further expand this research so anyone can compare the transaction volumes and transaction fees of various blockchains on-demand and build customized graphs. This graph demonstrates that the transaction count of SOL is significantly higher than other blockchains, and it is followed by BSV. Whereas most of the blockchains are transacting at their cap (indicated by a horizontal line exemplified by ETH’s graph), the BSV blockchain is not operating at capacity (indicated by peaks that rise and fall). Chainlink (LINK), EOS, Solana (SOL), and Bitcoin SV (BSV) are the only blockchains that have exceeded 5M transactions per day on one or more occasions.

The vast majority of Solana transactions however are what they call vote transactions, which are not initiated by users for anything of value to them but are key to keeping the network secure. With this in mind, while Solana generally has the highest transaction count of any blockchain, it’s somewhat comparable with BSV when removing voting transactions. We dive into this voting transaction phenomenon further in the section on Solana near the end of the research. 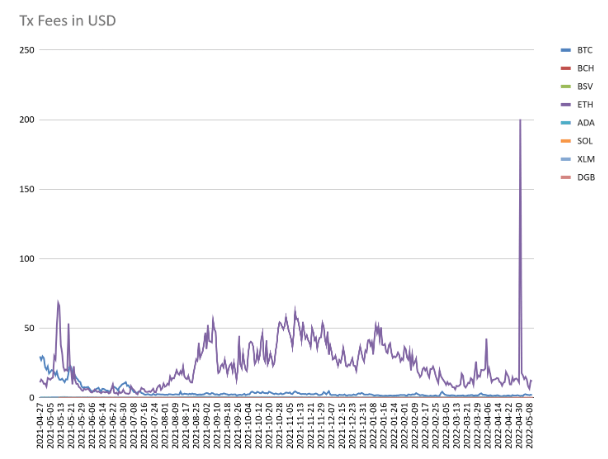 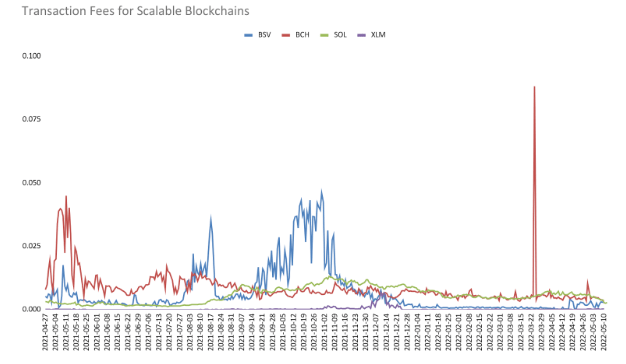 This graph demonstrates transaction costs over the past year for various scalable blockchains. As you can see, despite some spikes in all networks, the transaction fees are very insignificant. As you can see, currently, the fees for Stellar (XLM) are the lowest, followed by Bitcoin SV (BSV).

Figure 3 demonstrates that for BSV, there is an inverse relationship between transaction volumes and transaction fees. In other words, the more transactions that take place, the lower the cost of the transaction. It is also notable that the maximum transaction fee peaks out below 5 cents—and this is the second-lowest value among the blockchains for which there is public data we have analyzed. BSV’s transaction fees were only second to Stellar (XLM) which might not qualify as a blockchain by certain measures. We will discuss the “blockchain-ness” of Stellar later in Part 3 of the research paper. 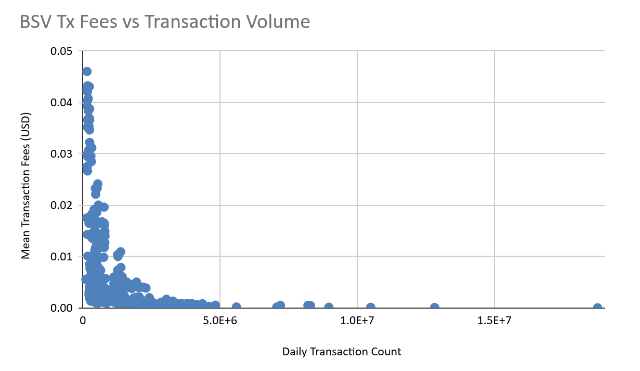 Scatterplot for BTC demonstrates that as transaction volume increases, the transaction fees increase as well. This is a strong correlation effect. 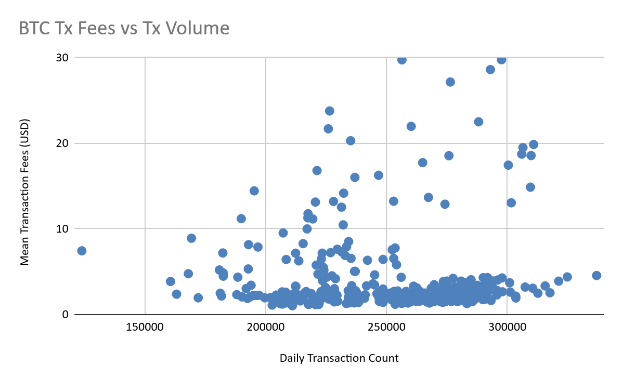 Figures 7 and 8 refer to Ethereum

Transaction Volume and Transaction Fees for
Ethereum Plotted over time Ethereum’s Transaction Fees Compared to its 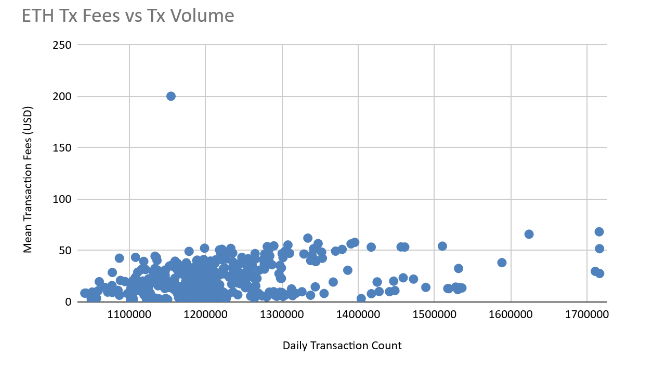 Figure 7 demonstrates that the Ethereum network has achieved close to 1.7m transactions per day, with fees rising to 220m on the highest occasion (and typical fees include 50-100m). The typical fees per transaction can rise to about $50.

Figure 8 shows that Ethereum transaction volumes are pretty consistent as the network is occupied with the current volume of transactions. However, we can see that there is a slight positive correlation between transaction count and transaction fees. The small correlation is understood in the context that for a constantly jammed network, the prices for fees are calculated by taking into account the scope of the timeframe in which the transaction might take place—which might span longer than a day. In other words, there is an expectation buffer for transaction fees over time.

This figure demonstrates that there is a strong positive correlation between transaction volume and transaction fees for the Cardano (ADA) network. 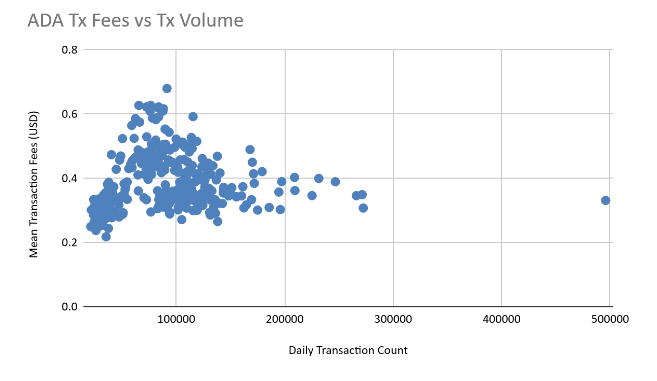 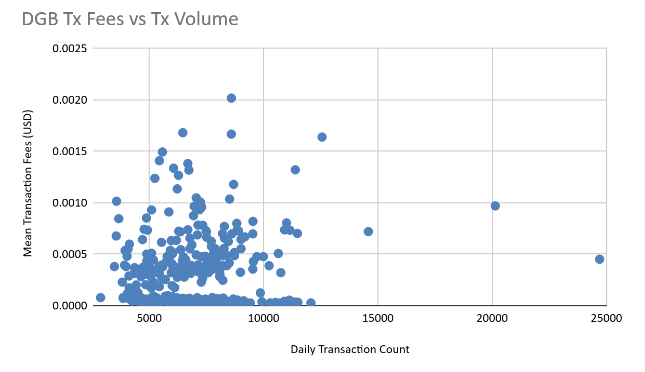 This figure demonstrates that the Stellar network is scalable enough to allow for transactions in the scale of 6-7M without facing congestion, but that at around 6M, its additional transactions count will heavily influence its transaction fees. In short, Stellar has very low fees but at higher volumes, it is heavily susceptible to price increases. As you can see Cosmos is not very scalable, and its network has consistently only allowed for approximately 100,000 transactions per day – except for one day when transactions reach 130,000. In terms of fees, there seems to be a very weak influence of fees on volume. 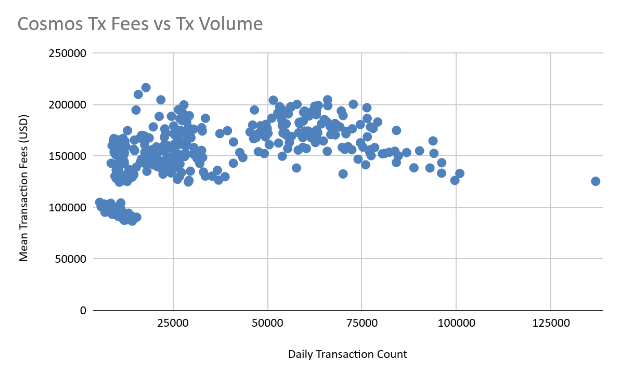 This figure demonstrates that Algorand is scalable enough to allow for transactions up to 5M per day. However, there is a positive correlation between transaction fees and transaction volumes. 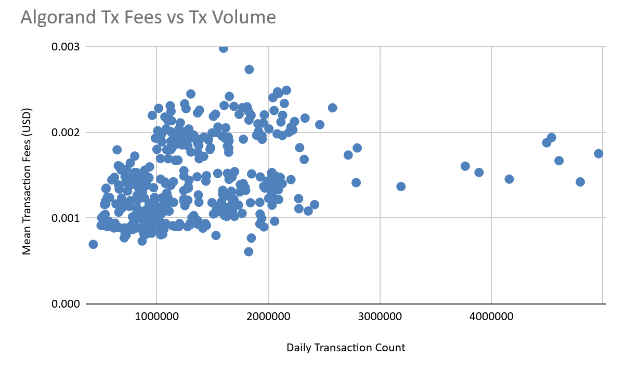 As you can see in figure 14, up to 8-9M transactions have been cleared through Polygon at its peak congestion, and the transaction fees have remained relatively low in dollar amounts (in cents) aside from two peaks in gas prices. 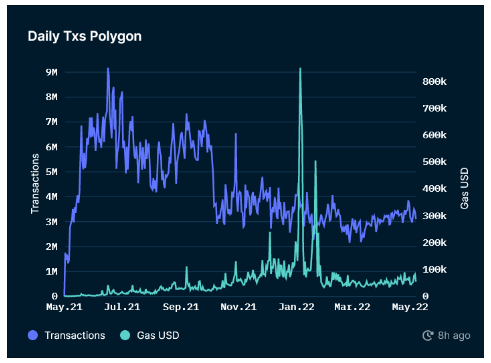 The argument arises that for various blockchains, the peaks in fees (in USD) might be due to the peaking price of their native tokens (e.g. MATIC) as opposed to an innate increase in prices due to congestion. We decided to test this idea against a coin with aggressive changes in pricing, and we chose Polygon (MATIC) because no other token had such aggressive changes in price over short periods. As you can see in figure 15B, the transaction fees (measured in MATIC) vs. transaction volume also demonstrate the same bi-modal distribution and the same price peak at about 200-300k transaction volume. Hence, we can see that the Polygon network has so far sometimes been able to contain transaction fees and at other times seen the transaction fees rise to over 5 cents. We believe that the same relationship of congestion with transaction fees is stronger than the relationship between token price and transaction fees for most if not all of the blockchains we have analyzed here. 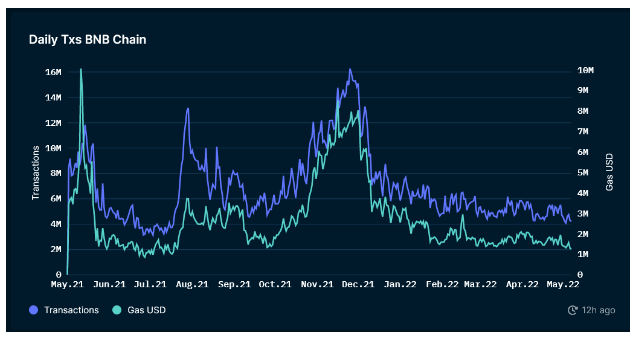 In this figure, we can see that the non-vote transactions peak out at 50M and typically reaches a maximum and perhaps a congestion level at 20M. The network has failed and gone down for many hours at these levels prior. Solana has proven to have stability problems due to nodes going out of sync with each other relatively frequently. For example, as of May 17, 2022, the official Solana explorer cites that the Solana network has been “down” for 1.11% of the time over the past month. That equates to a blockchain being down for approximately 8 hours per month.

All three of these chains (Solana, Stellar, and Bitcoin SV) have kept relatively consistent fees and have not seen sustained exponential growth in fees. However, with the price-volume relationship that we observe for BSV, we predict that there won’t be a sustained spike in transaction fees with volume growth. We cannot predict the same for either Solana or Stellar, which will likely continue to have transaction fee spikes at times of peak transaction volume. Since periods of peak volume are by definition key periods for users of the networks, we foresee this being untenable for network users as users attempting to use the network will have to pay higher and non-typical fees or risk seeing abnormally high rates of transaction failures. Matters are made even worse when high transaction volumes halt all network activity as we have seen on Solana several times over the past few months which, by our calculations has been fully down for 1.11% of the time over the last 30 days.

There are other caveats to each blockchain that make them unequal in other important regards. For example, we must study how these impressive scale solutions have been achieved. For example, Stellar is not a typical blockchain in the sense that it has built-in points of command-and-control centralization, such that the Stellar Foundation arguably controls the entire network. The network contains only ~44 validators that are heavily centralized around the Stellar Foundation. Bitcoin SV is also relatively centralized at this point, but neither the Bitcoin Association nor any other institution holds the power to keep it centralized, and the current centralization of the network is led by economic incentives and different outlooks and perspectives of miners in terms of mining BSV.

Another issue is that Solana and Stellar follow a Proof of Stake consensus algorithm that has its inherent weaknesses that we have explained in our first book. PoS miners are not as directly incentivized to improve the speed at which they can process transactions. In this system, which is held back by the well-known phenomenon of the tragedy of commons, PoS miners have little incentive to invest in scale unless all miners invest in scaling the network. Finally, if we expect blockchain to be the core infrastructure on top of which businesses build, reliability is of paramount importance. Both the Solana network and the Stellar network have gone “down” on several occasions, whereas the Bitcoin or BSV network has never had outages due to network congestion, and has never gone down in any capacity since the very early days of the Bitcoin network currently known as BTC (between block 27 and 28, when the network had virtually no users or activity).

For all of the above reasons, we conclude that Bitcoin SV is the only scalable blockchain that exists today and is positioned to maintain its efficiency as network usage grows.

Joshua Henslee and Zach Resnick from Unbounded Capital recently caught up to discuss the origins of the venture capital firm, its micropayments thesis, and much more.

Bank Indonesia will launch its digital rupiah under Project Garuda, which will be trialed in three phases, with wholesale CBDC a priority, as stated in the white paper.

The deal will see V Ventures own 90% of the embattled Zipmex exchange as part of attempts to raise liquidity.