A week ago, I found someone online spouting that Satoshi encouraged side-chains and lightning network. Anyone who has been around the Bitcoin community for the last several years knows very well, that both the Lightning Network and Pegged Side-chains are relatively newer concepts within the Bitcoin paradigm.

So my natural response, was to challenge this person, to present the evidence, that Satoshi did make mention of side-chains. I also stated that I would gladly retract my own statements if I was wrong – I was certain I wasn’t.

Sure enough, this user was quick to post 3 links. One of which did in fact have evidence of Satoshi Nakamoto himself, mentioning the term “side chains” and how it could work with Bitcoin. 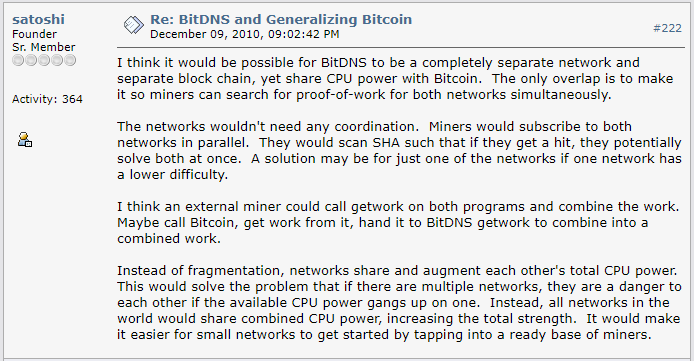 Purely on a technicality, I lose this one, because the words “side chains” were mentioned. What bothers me about this is that those who refuse to delve into the detail, would buy into this social trickery that Blockstream’s fanboys love to play on.

Anyone who decides to look into it however, will find that Satoshi was never referring to the same side-chains that Blockstream are obsessed by. In fact the modern, and seemingly accepted definition for side-chains are the pegged side-chains as described in the paper by Adam Back et al, titled “Enabling Blockchain Innovations with Pegged Sidechains”.

The two way pegged system envisioned by Blockstream and co describes the side chain as “a sidechain whose assets can be imported from and returned to other chains; that is, a sidechain that supports two-way pegged assets.”

Figure 1: from the paper illustrates the two way peg protocol: 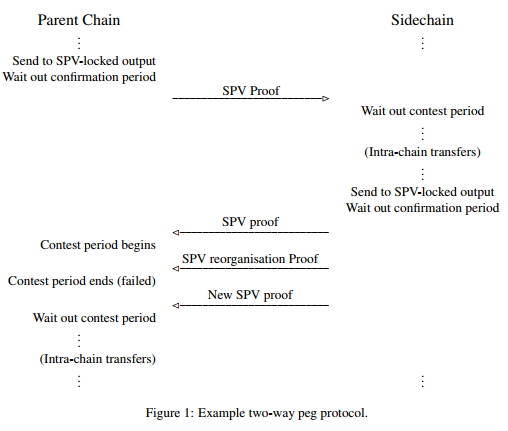 This now takes us to the BitDNS project. For those who are not familiar with BitDNS, this was an idea for a project to provide a domain name service, to support transactions for registering, updating and transferring domains. This project later became an altcoin known as “namecoin”.

But how did Satoshi envisage this would work? In his words he stated that BitDNS could be:

“…completely separate network and separate block chain, yet share CPU power with Bitcoin.  The only overlap is to make it so miners can search for proof-of-work for both networks simultaneously… The networks wouldn’t need any coordination.”

On BitDNS, Satoshi also stated “independent networks/chains can share CPU power without sharing much else”.

The pegged side-chain solution as described by Blockstream and company is chalk and cheese when compared to what Satoshi was talking about.

Scratch the surface, and trolls and shills are always exposed for what they are.

The trouble is, some people do fall for this manipulation of context. The same way many fell for the Segwit narrative… and now where are we at? What has Segwit really given? So the goal posts move again, and we get people screaming that wallet providers need to enable Segwit transactions. Even if the entire eco-system adopted Segwit transactions, the benefit would be trivial from a scalability point of view. Don’t fall for it. But even if Segwit solved all the world’s problems, why on earth would it be released as a soft fork, thereby, Core, placing themselves in a position where they have to ‘beg’ the entire eco-system to adopt it… The whole point of the soft-fork in this case was that it was not mandatory. A hardfork, would have made it mandatory.

Given the technical debt the soft-fork introduces, I’m left to believe that the only fathomable reason Core did not hardfork Segwit, is because it would have risked Bitcoin splitting into two (if not all miners jumped onboard), and with their limited blockspace (and mining power), would have sent fees spiralling out of control, while the other chain which would have engaged bigger blocks, would have dealt with the slower transactions with ease. Their bluff was called however, and Bitcoin Cash was born. The split happened in any case.

I agree with many early adopters, Bitcoin Core is headed into a hurricane. Yes, that means, that the economic majority on this, are wrong.

In fact, smart money, is usually with the economic minority.

The 2008 global financial crisis, and events unfolding in the Bitcoin world lately, have very firmly led me to believe that the economic majority, does very often, tend to be wrong.

How can people, who invest so much money into things, many of whom, you would assume to be mightily intelligent, be so wrong on so many things?

I believe the answer lies in the blinding shine of the bling-bling. It’s a psychological thing, but humans are very prone to get excited over money, and when money is coming in thick and fast, people would rather look at what’s coming in, rather than what can potentially fall out. Granted not everyone ignores the devil in the detail. Michael Burberry was one such man, who did one thing that everyone else seemingly did not in 2007. He looked.

So anyone that actually bothers to look will know that Bitcoin Core (BTC), with its failure to scale, is doomed. Not because BTC was incapable – it was very capable, but it chose not to scale and grow. So now the price and trajectory will overshoot, and will result in a calamity that will make the MtGox saga look like it was nothing.