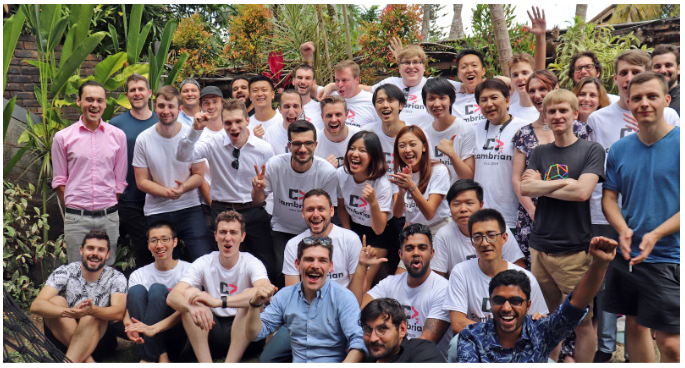 Bali is a tropical island full of relaxed locals and excited holidaymakers. Plus – for last week only – about 30 developers from Bitcoin SV startups working together in a big room for several days. They soon found they had much in common, in the technical problems they were working on and their overall ambitions.

The atmosphere at the CambrianSV Bootcamp was uniformly positive and mutually supportive. The organisation of the event, though a team headed by Jack Liu of RelayX, was exemplary – well-planned without being bossy or officious.

It can be counted as a triumph in itself that people had actually turned up in distant (for many of us) Bali. Nobody on Jack’s team actually knew the place, so choosing it was a gamble. But people arrived from Germany, Brazil, the US, Scotland, Singapore, Japan, China and Argentina – to name just a few – and were delighted with what they found.

The days were a mix of talks on technical matters, some outings, for fun, but mostly just plenty of time for the developers to work on their projects. Through the week, they were invited to show what they were doing to the whole group, before, during and at the end (below). Some teams, such as Twetch, were bigger and more advanced than others, with live products already doing business. But those without a product to show were treated with equal respect and interest by the rest of the group.

Throughout, there was a sense – no, more than that: a real intellectual understanding – that it was in everyone’s interest that all products or ideas should succeed. More transactions on the blockchain mean that BSV will be secured through its mining network being made profitable; and more transactions bring more users into the BSV world, ready to try other services. It’s a bit like how early Internet businesses were happy for other Internet startups to succeed because the more people that came online, the bigger their potential market.

Bali itself provided a delightful backdrop to the event. From the balcony next to the main room, where breakfast and lunch were served, arcane discussions about op returns and R-Puzzles took place against a wall of waving palm trees, with the sounds of exotic birds and the mopeds on the small road outside wafting up from below.

And, yes, we did get to see a little beyond the event venue, with an outing to traditional rice terraces (above) and another to a monkey sanctuary. On those occasions we must have seemed like any other group of tourists – until you caught snatches of conversations about technical matters that continued with the samel intensity, even among the monkeys. On the last day, minibuses shipped everyone off to the coast for a party by the beach.

So what did it all add up to? Well, it was certainly a unique and memorable time. Friendships were formed and links between technical teams will lead to future cooperation. Already, there were products being adapted to incorporate each other’s services, to their mutual benefit.

But perhaps it was the reinforcing of a pioneering spirit that will be the real legacy of CambrianSV. Participants who are now already physically dispersed around the world will remember – in a visceral way which online communication can never match – that there are friends and colleagues who believe in the same vision that is powering their efforts to take BSV to the next level. If and when that happens, those few precious days in Bali could assume a legendary status.

You can catch up on reports on each day’s events at the CambrianSV Bootcamp on its YouTube playlist.