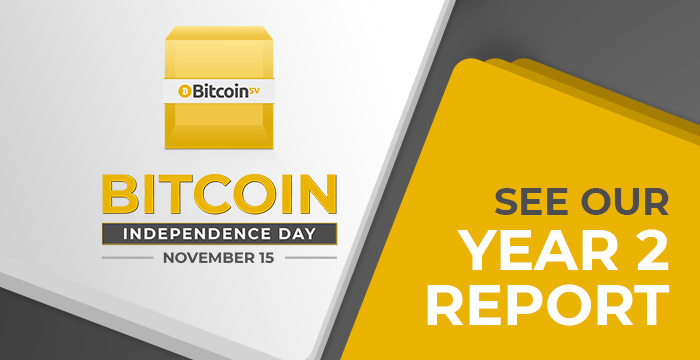 On November 15, 2018, Bitcoin (BSV) got its independence. What started as one chain with one vision experienced a fissure in its ideology that created two theoretical communities within one blockchain network. A community that believed Bitcoin was on the right track but needed to become unconstrained to reach its full potential (BSV), and a community that believed Bitcoin was insufficient and that its protocol needed continuous modifications (BCH).

Eventually, the in-fighting led these two groups to move beyond theory and literally split. On November 15th, the BCH blockchain experienced a split that led to the creation of a new ticker symbol (BSV) and independence for Bitcoin; and ever since, the original Bitcoin network has been on a tear.

Unbounded scalability leads to unbounded possibility
Once Bitcoin achieved independence from rogue protocol developers, there were virtually no obstacles preventing it from success. Over the last two years, the Bitcoin ecosystem has experienced several on and off-chain events that can only be realized in and around a blockchain with no limits.

This year alone, there have been many events that have taken place on Bitcoin that have allowed it to prosper: the Genesis protocol upgrade took place, nano-payments is now economically viable for transaction processors and network users, Twetch became the first consumer-facing Bitcoin application to put 1 million transactions on-chain, and CoinGeek hosted two very successful conferences, one in each of the Earth’s hemispheres, among other events.

As of June 26, 2020, there are 428 projects built on Bitcoin SV—and the numbers are expected to increase as the ecosystem continues to expand and professionalize. Innovative new use cases have also emerged: EHR Data is building a Global Electronic Health Record on the blockchain, while Veridat is tapping the Bitcoin BSV blockchain to record proof of clinical research data; high-throughput wallet MetaStreme has announced partnerships with businesses in industries such as ecological monitoring and voting; Experiential reality (XR) platform Omniscape combines augmented reality and virtual reality experiences, while also integrating location and blockchain-based features; payments provider Centi is allowing merchants to accept BSV payments via existing point-of-sale infrastructure; and BSaV.io introduces legally compliant products such as interest-bearing depository and BSV-based loan facility.

Bitcoin BSV has opened up a world of opportunity in regards to what can be created on a public blockchain thanks to its unlimited block sizes, low transaction fees, and high transaction throughput. It has also empowered consumers by letting them own their own data and choose when, where, and how they would like to monetize it.

What’s next for Bitcoin?
The answer to that question is really up to you. Although there are several developments taking place in the Bitcoin ecosystem that we will see come to fruition in 2021, the possibilities to build and earn on Bitcoin are endless.

There are several resources available to help you build on Bitcoin; whether that be the Bitcoin SV wiki to help you get a better understanding of the Bitcoin protocol, or Unwriter’s tools that will help you in your development journey.

Bitcoin has a bright future ahead of it and the Bitcoin ecosystem plays a significant role in making Bitcoin better.

Check out the Bitcoin Year 2 report to learn more how the original Bitcoin protocol is powering the growing Bitcoin SV ecosystem.