Puru Saxena, popular investment commentator on Twitter, asked Anthony Pompliano some hard questions about Bitcoin, which “Pomp” publicly declined to answer. I decided to respectfully help out Mr. Saxena while explaining how he is right about some of his criticisms of BTC, while he likely does not understand that the Bitcoin protocol isn’t bound to any tickers, but exists as a complete implementation on the Bitcoin SV network.

I combined a couple of his questions as I saw fit, but didn’t leave any topic unanswered.

How is Bitcoin a store of value when it moves around 15-20% per day, and often has very large multi-year swings in price?

It isn’t a store of value, and was never meant to be. This idea comes from the Cambridge theory of monetary economics, which is rooted in the belief that money rises from the utility of “collectible” and then later becomes a means of exchange. History is complicated on this front, because in some cases it is true, but in others, it is not. Keynes is arguably the most prominent economist who embraces this theory about money because he believed that a store of value was a good basis from which to derive inflationary fiat notes since the store of value became too difficult to use compared to the derivative notes made from it. In Bitcoin, this is expressed by calls to “just spend fiat” or “just use Visa” which is why most BTC accumulated over the last few years is held by custodians and in lending programs for people to derive spendability off of the asset without actually using the asset itself. BTC is a sort of digital “Rai Stone,” in that regard, but the concept of BTC being a pure “store of value” is an idea that came along with Silicon Valley money that arrived in 2014-15 that wanted to explore Bitcoin’s use as the basis for connecting proprietary, for-profit networks to it (like Lightning Network, Liquid, etc…)

It’s important to note that BTC was re-engineered to behave this way, though. Bitcoin was designed as an electronic cash system. Satoshi Nakamoto designed bitcoin for small casual payments in internet commerce. These can occur via tokens built upon bitcoin, or by using bitcoin as a frictionless digital commodity itself. Here’s what was said about it by its creator in the Bitcoin white paper.

Price fluctuations should be expected with a commodity, but “store of value” is a vague concept that doesn’t really apply to bitcoin without some shoe-horning and elbow grease.

How is Bitcoin a safe haven asset when it is tied to global liquidity and goes up and down with other risk assets?

Bitcoin was not designed to be a safe haven. It is a sound money which should increase in value over time relative to the sectors that it disrupts and replaces. Bitcoin was designed to disrupt remittance, settlement, banking, gambling, communications, databasing, ecommerce, and any other industry where extra value can be created through increasing the integrity of data. Usefulness in commerce should bring real liquidity into the network over time, but ultimately, its value should be counted not against its settlement liquidity, but in how often it is used to create economic value without needing to be settled for fiat currency.

Unfortunately, BTC has largely been deprecated of its usefulness in those sectors as its functionalities have been turned off by developers in exchange for focusing on the disruption of Swiss bank accounts and large, expensive, but unstoppable payments. Most of its liquidity is provided by a derivative of fiat currency called “tether” which also has its own problems with true settlement liquidity and trustworthiness in the marketplace. Tether (the business entity which issues the stable coin) is currently under investigation by the NY Attorney General’s office and other regulators under accusation of running a fractional reserve itself.

The change in Bitcoin’s focus over time caused splits in the Bitcoin economy with the chain splitting into three major chains. SHA256 hashing power secures BTC, BCH and BSV.

With this level of volatility, how can bitcoin be a means of payment? How is Bitcoin a medium of exchange?

Bitcoin can be spent and instantly re-spent. It can also be used to deploy tokenized assets like digital dollars, or smart contracts can be created which hold amounts in escrow until certain circumstances are met.

How is bitcoin a unit of account when governments collect taxes in fiat?

The government doesn’t set the standard by which things are accounted anywhere except in their own ledgers. Cost basis accounting works just fine for that sake, if you are participating in the government’s systems. Over time, the plan would be for increased use to create stability in relative purchasing power meaning that Bitcoin (rather than dollars) become the more stable measuring stick against other economic goods and services. In short, this is more of a goal, rather than an innate property in the external economy.

However, in the network itself, miners accept Bitcoin as their internal unit of account for acceptance of transactions and other things created on, in or with Bitcoin.

The Bitcoin protocol is more efficient than centralized payment processors when it is implemented with the intent to handle those things. Amid the long Bitcoin Civil War, BTC was heavily rate limited on its journey to being re-engineered to being an exclusive investment asset. Satoshi Nakamoto created Bitcoin without the arbitrary limits of BTC, and he bragged about it nearly 12 years ago before BTC got taken over by folks with narrow vision and goals. 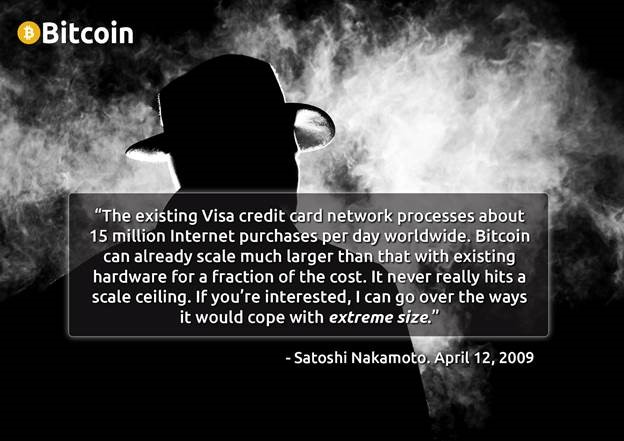 Will governments allow the world to get off fiat money and onto the Bitcoin standard? If yes, why?

Governments didn’t really let anyone get off the royalty standard or the feudalism standard or the chattel slavery standard or any other economic standard of the past. When ideas and systems become obsolete through innovation, they become impossible for the government to maintain. This is why it is so important for Bitcoin to disrupt as many industries as it can as fast as it can. This is another reason why bitcoiners split away from BTC with its limited usefulness. It may also be why we are seeing so much interest by banks and big financiers to focus on BTC rather than the more useful and widely disruptive versions of Bitcoin like BSV.

If Bitcoin replaces fiat, and its supply can’t be increased, how will banks create credit and how will households and companies take loans?

Bitcoin’s innate properties as a base layer upon which to create legal tokens which represent other value is a crucial point on this front. A bank can collateralize bitcoin holdings and use them to create spendable fiat, securities, bonds and other assets. It can also have programmable terms including automatic repayment and interest enforced at the base layer of the contract – all occurring automatically.

If Bitcoin replaces fiat and the supply can’t be increased, during future recessions and economic crises, how will central banks and governments provide stimulus? Great Depression example…

This is a feature, not a bug. Central banks were created to centrally manage the supply of money to mitigate the size of booms and busts. Since their creation, booms and busts have only gotten larger. A programmable, frictionless, sound money creates new economic efficiencies and new economic ideas which can hardly be predicted. The goal of Bitcoin, on this front, is to so fundamentally change the nature of macroeconomics that such questions become as obsolete as asking how the world will pick cotton if the slaves suddenly become freed.

If a currency doesn’t have some intrinsic value relative to real world assets/liabilities, or the full backing of the government, even if you can send it around the world within minutes, its value will swing wildly based on others’ willingness to take it off your hands – it won’t be a store of value. How will Bitcoin get around this issue?

Bitcoin is a zero sum game. It doesn’t produce anything. At any point in time, the sum of all the cash put in by the losers is equal to the sum of all cash taken out by the winners. So if Bitcoin doesn’t produce anything and doesn’t have intrinsic value, are you suggesting that if everybody on the planet converts all their cash to bitcoin, each participant will become super wealthy?

Your criticisms do apply in many ways to BTC, but not to the bitcoin protocol or to its complete implementation in Bitcoin SV (BSV). If the purpose of bitcoin was to be traded on exchanges for fiat or derivative assets only, yes, it is a zero sum game.

However, bitcoin does produce economic opportunity like no other fintech tool in the history of the world. Much the same as the existence of the internet creates completely new business models and revolutionizes most of the pre-existing ones, bitcoin creates a reduction in payment friction across the entire internet, and it increases the integrity and trustworthiness of data at the same time. As data has become one of the most valuable global commodities, valuing it instantly and securely while granting control to the owners of said data is something that only a high velocity proof of work network like Bitcoin SV can do. And whoever solves this problem at a global scale first will revolutionize the data economy of an entire new era of commerce.

Furthermore, about half of the planet is currently disconnected from the global economy, banking and verifiable sources of identity; making it difficult for them to find work. Bitcoin, properly implemented, also connects those billions of people to the rest of the planet in a way which makes them valuable contributors to worldwide commerce in new ways.

This is NOT “zero sum.” This is the foundation of a new era in global economics in the same vein as oil, steel, human flight or the internet – maybe all of them combined.

Combining data sovereignty and the addition of billions of new participants in the world marketplace with bitcoin’s disruption of banking, remittance, media and the internet is incalculably valuable. To estimate its projected value into the tens of trillions of dollars of economic opportunity is conservatively a fair assessment, but only if we are bold enough to implement it in a way that can scale.