PLONK is a state-of-the-art zk-SNARK proof system. Previous zk-SNARKs such as Groth16 have circuit-specific setup, which requires a new trusted setup for any new circuit. PLONK’s trusted setup is universal, meaning it can be initiated once and reused by all circuits[1]. It is also updatable: one can always add new randomness until one is convinced the setup is not compromised. 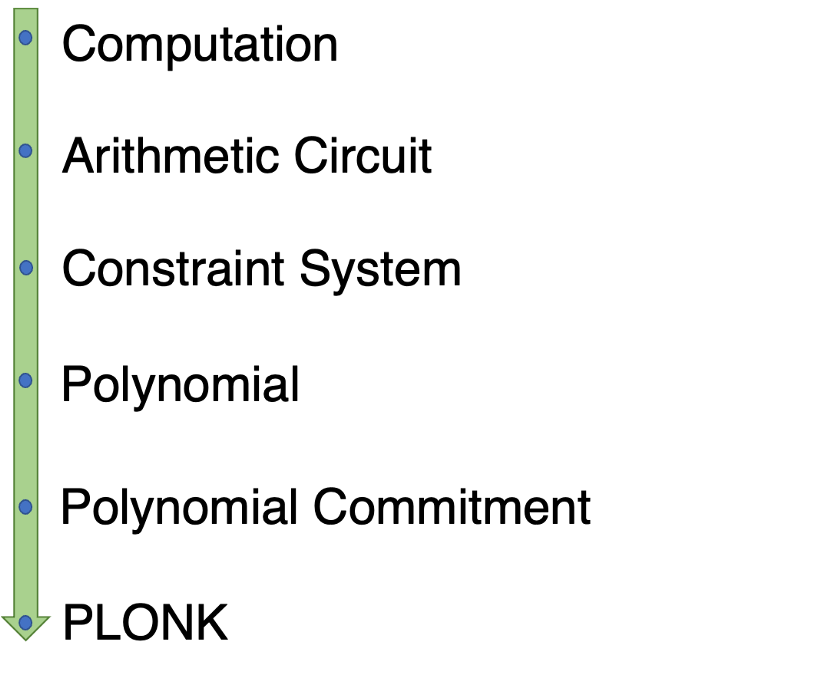 We will explain each step in details.

PLONK does not understand a program one wants to prove. It first has to be converted to a format called an arithmetic circuit. Arithmetic circuits are circuits made out of two types of gates: addition and multiplication.

Next, we transform an arithmetic circuit into a constraint system. There are two categories of constraints on the circuit wires.

These are constraints within each gate of a circuit. The above circuit has four gates and the following constraints, i.e., equations with a certain format.

In PLONK, all constraints are normalized/standardized into the following form[2]:

a, b, c are left, right, and output wire of a gate. All Qs are constants.

It can be regarded as a generalized gate, which can be configured by tweaking Qs. For example, setting Qs as follows turns the generic gate into an addition gate.

Fig. 2 is normalized to the following:

We can rewrite Qs in vector forms:

The Q vectors are called selectors and encode the circuit structure, i.e., the program.

Similarly, we can collect all a, b, and c’s into vectors:

These vectors are called witness assignments and represent all wire values derived from user inputs, some of which may be private and only known by the prover.

These are constraints across different gates, e.g., c0=a1. We will defer to Part 2 to explain it.

Likewise, we can convert other vectors to polynomials, evaluated at the same domain. Let us define f(x) to be:

All the constraints in Fig. 7 will be met if and only if the following holds:

We have compressed all constraints to a single polynomial f(x), which can be expressed as follows.

This is because 0, 1, 2, and 3 are roots of f(x). Fig. 9 holds as long as there exists such polynomial H(x) that makes f(x) divide Z(x) without any remainder. Z(x) is called the vanishing/zero polynomial, H(x) the quotient polynomial.

We can define another polynomial g(x):

Schwartz–Zippel lemma states: let f(x) be a non-zero polynomial of degree d over a field F of size n, then the probability that f(s) = 0 for a randomly chosen s is at most d/n​. Intuitively, this is because f(x) has, at most d roots. In practice, d is usually no larger than 100 million, while n is close to 2²⁵⁶, meaning d/n = 1/10⁶⁹.

This means if we evaluate polynomials at some random point and the evaluation is 0, it suggests that the polynomials are, in fact, zero everywhere with overwhelming probability.

A PCS consists of three rounds between a prover and a verifier:

We can use PCS to prove g(x) is zero in Fig. 11. The PLONK paper uses Kate commitments based on pairing. Other PCSs can be used as well.

We will cover the remaining copy constraint part in the next article. Stay tuned. Please let us know if there is any error.

[1] As long as the new circuit is not bigger than the original circuit.

[2] The Plonk constraint system is similar to the rank-one constraint system (R1CS) in that they both can have only one multiplication in each gate. The difference is that R1CS allows unlimited additions in a gate, while Plonk can only do one, excluding the addition of a constant.

[3] In practice, the coefficients will all be integers since all operations are done not over integers but a prime field.