For the hour leading up to the Genesis Anniversary Livestream, I was nervous. I have been broadcasting since 2003, but every time I get ready to go on the air, I need a bit of time to myself to clear my head and get mentally ready to talk to the audience. I’d like to tell the world that it gets easier. But it doesn’t. It never gets easier, and maybe it shouldn’t!

We had been preparing this show for a few months now. CoinGeek brought me on to do a podcast of some sort, but the details hadn’t been fleshed out, so starting in November, we kicked around some ideas.

On a Saturday morning a few months ago, CoinGeek contributor (and personal friend) Joshua Henslee called me up and we brain-stormed some ideas. I honestly can’t remember who said it first, but by the end of the call, we came to the conclusion that there would be something extra special about doing it live! So, I pitched it that way to the CoinGeek editorial and media team (who loved the idea!), and we headed down that path looking for a debut date around the end of January.

Then, in the shuffle of everything going across the editor’s desk at CoinGeek, we realized we needed a piece of content for the Genesis anniversary, and decided this would be the perfect time to debut the new livestream to the world.

The Genesis Anniversary Livestream would be the first episode of “the CoinGeek Weekly Livestream with Kurt Wuckert Jr!”

Opening with an anecdote about the Genesis block in 2009, and meandering through a brief history of bitcoin, my monologue covered The Bitcoin Civil War, the split to BCH and then BSV, a quick mention of Quasar, and then settled on the story of the second Genesis! As my monologue came to a close, my nerves loosened up, and I let everyone know that Zatoshi donated some free BSV to give away on the show, and that my big announcement was that this was the first of many streams to come!

I was happy to be joined by my guests for this episode. Longtime audience favorite, Connor Murray, lined up with nChain R&D ace Jack Davies and the CTO of CREA, Matej Trampuš, whose team recently joined nChain and was critical in the development of Genesis. We discussed the history of Bitcoin with a focus on the Genesis upgrade, and talked about the technical, philosophical and economic thought that went into the creation of truly unbounded Bitcoin.

If there is one word that could describe the discussion, it would be “gratitude.” So many times, everyone on the show was happy to pass along praise. From Trampus’ sharing a photo of his large team to the praise coming from Steve Shadders in the troll box, and Davies’ excitement to have “the best job in the world” working under Dr. Craig Wright, these men are solving problems with tools that could matter “forever,” It was exciting to show the world a few of the faces that are truly bringing Bitcoin to the real world in a way which is useful for normal people to create very real value!

We covered some of the engineering challenges of reworking the software from scratch including an incredible dependency graph used to map out development, and we even discussed how often the Bitcoin White Paper comes up in development conversations. Murray and Trampus agreed handily that while the elimination of the block size limit received the most praise, the most important part of the Genesis update was the liberation of scripting language. Mirroring Shadders’ speech at CoinGeek London, there is now an incredible amount of opportunity in becoming a first generation Bitcoin Script developer. While Davies wanted to agree, he dug a little deeper into the philosophical and economic models in the hashing economy that Genesis makes possible. In agreement, I gave praise to TAAL (CSE:TAAL | FWB:9SQ1 | OTC: TAALF) and Mempool for truly stepping up to explore what it really means to be a cooperative competitor in the new world economy.

We also covered Teranode, and had a few comments from Satoshi Nakamoto himself as Dr. Craig Wright gave a few drops of wisdom about the bounds of scale in Bitcoin! 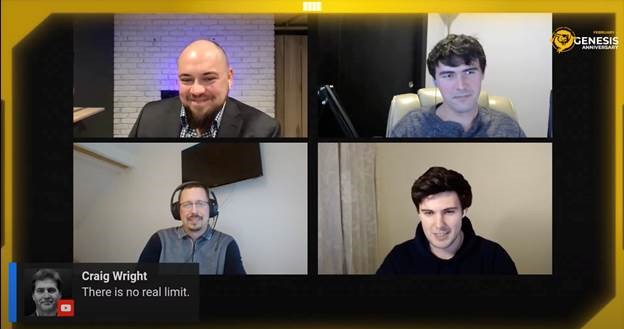 Connor had to leave at the top of the hour, but Trampus and Davies were gracious to stay and we talked another twenty minutes or so, in an interview which I would have enjoyed doing for much, much longer. We wrapped with a round of thanks to the inaugural guests, as I gave thanks to them, CoinGeek, Calvin Ayre, and my dear wife Natalie and son Ronin Atlas Wuckert for keeping quiet as we recounted the history of Genesis.

There were lots of gems about the inner workings of nChain, CREA, the road to Genesis and the future of Teranode. Please share with anyone who wants to hear an approachable conversation about the technical aspects of the Genesis upgrade and Bitcoin SV.

See you next Tuesday at 2PM EST for the CoinGeek Weekly Livestream!