Home » Business » Faketoshi Series (Nick Szabo): The men who are not Satoshi—Part 1

Editorial Note: Many thanks to Derek Magill for his research which inspired this article. His previous work on analyzing phrasing in old quotes as well as their consequences to the Satoshi story have been lightly modified and pasted respectfully in some sections of this article. Also, thank you to the people of MetaNet ICU for helping with some specific research and references.

Who is Satoshi Nakamoto? The pseudonymous creator of Bitcoin was a mystery to the computer science and cryptography world for many years. While Dr. Craig Wright was doxed as Bitcoin’s creator by Wired and Gizmodo in 2015, the politics of Bitcoin have muddied the waters and made a rational discussion of the facts very difficult to have with a mainstream audience. This is largely because of the perverse incentives of wealth that have been created in the gray areas where the truth hasn’t shined a light, and this article aims to clarify what it means to be a Faketoshi in 2022.

The small blocker BTC crowd holds a deeply political view about the nature of the Bitcoin protocol and its governance, and therefore gives a lot of weight to candidates who agree principally with their view of permanently small blocks, UASF governance, and an ethos of “code-is-law” from the cypherpunk community. While some candidates, like Dave Kleiman, have been proven in court not to have helped create Bitcoin, a great deal of populist candidates still get brought up regularly.

We will explore their histories, qualifications, and why they ultimately fall apart.

One of the most frequently noted is Nick Szabo. Szabo is a computer scientist, cypherpunk, cryptographer and an expert in C++ coding. He is also a legal scholar with a background in cryptocurrency theory. He was the creator of “Bit Gold,” a theoretical digital currency that Szabo proposed in the late 90’s and discussed frequently around the time of Bitcoin’s creation. Bit Gold shared some similarities with Bitcoin in that it used P2P networking to enable a financial network for transactions, but Szabo’s system lacked sybil resistance because it utilized a quorum of voting network addresses to come to consensus—something that Nakamoto ultimately clarified and superseded in bitcoin by way of honest nodes building blocks that contain a sufficient proof of work.

Szabo also has a peculiar style of commenting on code, and people on Reddit have brought up its similarity to Satoshi’s style. Then there are also anecdotes like “Nick is a gold bug” or “Nick is a libertarian” and generally into cryptocurrency, which people use to pad his reputation and bolster up a paper-thin explanation about all the reasons Szabo should fit the bill as the father of bitcoin. There’s even some internet rumors that the reason the bronze statue of the hoodie-wearing Satoshi was erected in Budapest is because some insiders actually know that Szabo is a Hungarian-American.

Somehow, Szabo also gets credit from many circles for “inventing smart contracts.” He does seem to have invented the phrase “smart contract,” but the work going on in this space started long before, and is truly just a conflict in phrasing and descriptors. In fact, with a little bit of digging, it seems like a “smart contract” is a concept that should plainly be called an “application,” given that it is simply a piece of software that follows a set of rules – just like every other application…

Looking through prior work on “smart contracts,” one can find lots of valuable references to application-enforced financial contracts going back to the 1970’s. For reference, here are some published works that absolutely precede Szabo.

Nick Szabo is an interesting person, thoughtful philosopher, and a master software programmer, but that does not make him Satoshi Nakamoto.

To start, Szabo has outright denied any involvement in the creation of Bitcoin. Aside from the occasional slip of the tongue, “I designed Bitcoi… Gold” it is important to understand that Bit Gold, the cryptocurrency often cited by Szabo supporters was only ever a theory. It was never implemented.

Second, and perhaps most important, is the history of Satoshi and the process of writing the white paper.

Satoshi’s first email seems to have been a solicitation directed to Adam Back, who told him about “b-money.”

Back has stated publicly, “I believe it was me who got Wei Dai’s b-money reference added to Satoshi’s bitcoin paper when he emailed me about hashcash back in 2008.”

Szabo should have already known of Dai at this point, but Satoshi clearly did not.

Satoshi reached out to Dai to ask for a citation date for b-money, so it could be referenced in the Bitcoin white paper, saying: “I need to find out the year of publication of your b-money page for the citation in my paper.”

Szabo would have known how to find the date himself due to his prior working relationship. Again, Satoshi was clearly ignorant of this.

Satoshi responded to Wei, saying: “Adam Back (hashcash.org) noticed the similarities and pointed me to your site.” Presuming this isn’t some kind of “5D Chess” by Satoshi, then he was unfamiliar with b-money before creating Bitcoin, and he was also unfamiliar with Bit Gold too. Adam Back introduced Satoshi to Wei Dai and his work, and Wei introduced Satoshi to Nick Szabo’s work.

Wei Dai has even said Satoshi was ignorant of Bit Gold until he mentioned it at some point in their emails saying, “In Satoshi’s early emails to me he was apparently unaware of Nick Szabo’s ideas.” 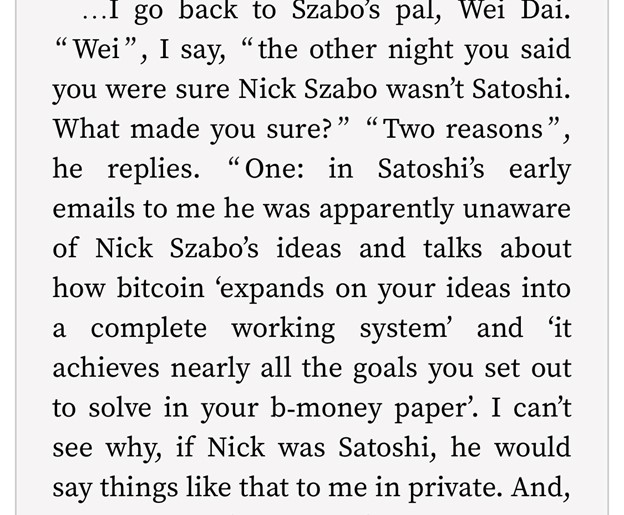 A reporter writing about Dai a few years later confirmed that Satoshi was unaware of Szabo. “Wei forwards me the relevant emails, and it’s true: Satoshi had been ignorant of Szabo’s bit-gold plan until Wei mentioned it.”

“My understanding is that the creator of Bitcoin, who goes by the name Satoshi Nakamoto, didn’t even read my article before reinventing the idea himself. He learned about it afterward and credited me in his paper. So my connection with the project is quite limited.” – Wei Dai

Therefore, it is more than reasonable to conclude that when Satoshi wrote that “Bitcoin is an implementation of Wei Dai’s b-money proposal […] on Cypherpunks […] in 1998 and Nick Szabo’s Bitgold proposal” according to Wei, he was simply adding credibility to his work. Essentially, he was citation stuffing.

In fact, we know that Satoshi had a penchant for citation stuffing because he had already created the ideas for Bitcoin before Back told him about b-money. He found references to bolster his ideas after the fact!

Satoshi even said that he made bitcoin before even thinking about the paper. “I actually did this kind of backwards. I had to write all the code before I could convince myself that I could solve every problem, then I wrote the paper.” This is in contrast to Szabo writing white papers, but never implementing Bit Gold.

The next thing to consider is Szabo’s views on bitcoin itself. Did he think and talk about bitcoin in a way that is consistent with Satoshi’s views on bitcoin? It seems that his economic plans for Bit Gold, and the one he now supports for BTC, are opposite to Satoshi’s. Satoshi wrote about scaling to allow micropayments with server farms and consolidation of nodes and pooled hashing, and he never said anything about a settlement layer. 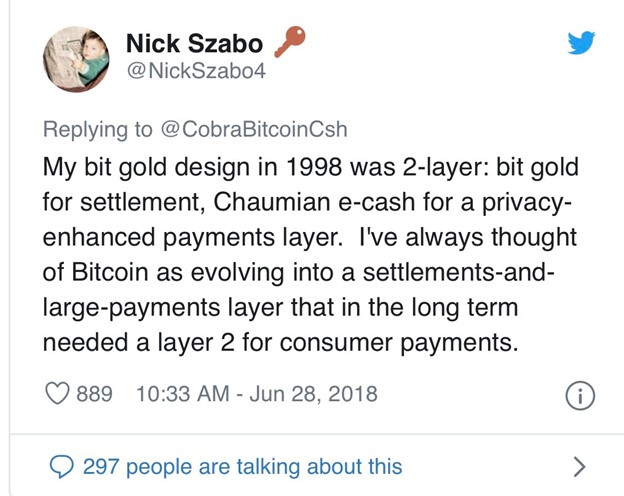 Szabo’s view and vision are a direct contradiction to many quotes from Satoshi. 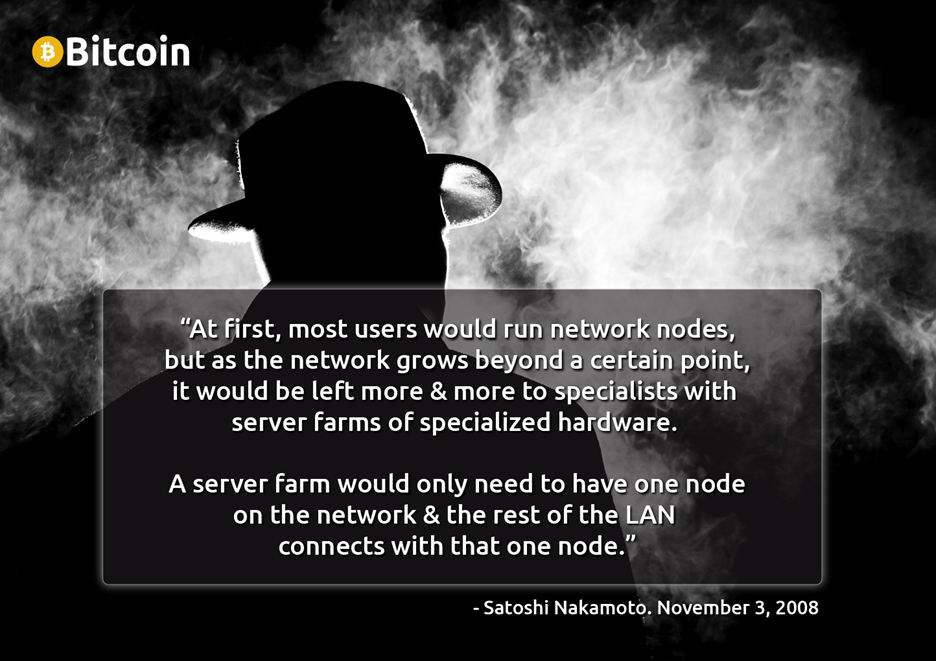 There are more examples of Satoshi’s distinct view of bitcoin that differs from Szabo’s.

Satoshi: “[Micropayments] can become more practical if I implement client-only mode and the number of network nodes consolidates into a smaller number of professional server farms. Whatever size micropayments you need will eventually be practical. I think in 5 or 10 years, the bandwidth and storage will seem trivial.”

How can people reconcile the difference in fundamental worldview about bitcoin?

Nick: “…we can have multiple protocol layers instead of separate kinds of physical objects. Bitcoin the settlement & large payments layer is the “gold”; layer 2s or 3s used for retail are the “silver” and “copper”, smaller but pegged to layer 1.”

Satoshi: “Gold mining is a waste, but that waste is far less than the utility of having gold available as a medium of exchange. I think the case will be the same for Bitcoin. The utility of the exchanges made possible by Bitcoin will far exceed the cost of electricity used.”

Notice both of them reference gold, but they both think about what gold is in very distinct ways. Szabo likes the idea of it being a settlement commodity, but Satoshi clearly thinks of it as a medium of exchange at the level where “cost of electricity” is a concern, which is L1.

Another curiosity is Szabo’s affinity for Ethereum, and the fact that he seems to be completely ignorant to the fact that bitcoin was implemented with a complex smart contract-capable stack.

In 2014, Szabo told Business Insider, “Ethereum has vast potential, whereas Bitcoin won’t ever do anything well beyond implementing a currency..” Do these sound like the words of the creator of bitcoin which is a more powerful smart contract protocol than Ethereum?

There’s also a series of tweets where Nick shows his ignorance of Ethereum and bitcoin-based systems by misunderstanding the now well-understood scaling problems of Ethereum compared to bitcoin. 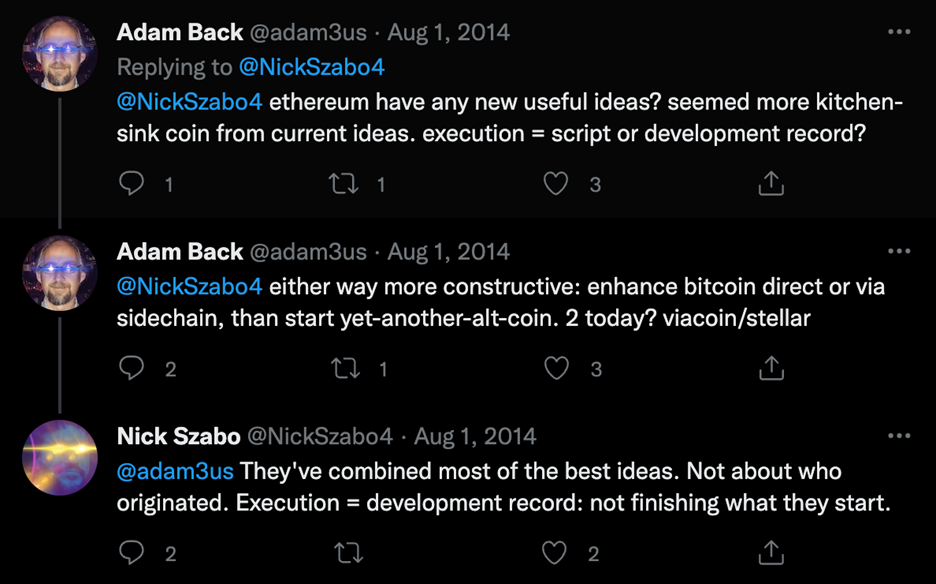 This can be taken a step further by illustrating the first time Nick Szabo and Craig Wright had a public interaction, and Wright explains that Bitcoin is a Turing complete system—a concept which clearly makes Szabo uncomfortable as it flies in the face of his shallow understanding of the bitcoin stack.

Szabo retorts that Wright is inaccurate, or at least being vague and theoretical which elicits some snickering from a similarly ignorant crowd.

However, Wright was proven correct by the work of Dr. Clemens Ley, who developed a tokenization method based on bitcoin’s Turing complete nature, which he has described many times for anyone who will listen.

And Xiaohui Liu has created similar proofs but up in raw Bitcoin script, interpreted through his sCrypt language in the BSV stack by deploying Conway’s Game of Life—which is the quintessential Turing test for computing systems.

Admittedly, neither the evidence for nor against Szabo as Satoshi are proofs themselves, but they beg the question whether someone who could be Satoshi would be so ignorant of the script stack in Bitcoin. He advocated for Ethereum because he didn’t realize smart contracts could be deployed in Bitcoin, and he has fundamentally different views about use and purpose for Bitcoin.

If we are to judge them on their merits, it seems impossible that Szabo could be Satoshi Nakamoto.

There is, however, circumstantial evidence that Szabo could be the adult version of early meme sensation “Star Wars Kid.”

Nonetheless, Szabo speaks to sold out crowds around the world because of the bizarre assumption that he could indeed be Satoshi Nakamoto simply because he bends the knee to the mainstream views of BTC. And this is why this discussion matters. Passing off BTC as an example of the bitcoin protocol and then leaning on the reputation of Nick Szabo under the assumption that his opinion might be authoritative because he might be Satoshi Nakamoto is a major problem for the cause of truth and justice. It’s certainly a problem for the cause of bitcoin.

For ‘crypto’ insiders, one’s opinion on Bitcoin SV (BSV) appears less based on the technology’s merits than on how closely one is linked to Roger Ver.

Digital currency businesses will soon face much stricter oversight in the European Union via the formation of a new cross-border regulatory body to tackle digital currency-based money laundering.

The Canadian Securities Administrators says that digital asset trading platforms are expected to file a "pre-registration undertaking" while their license application is under review.

Eqonex launched in 2020, catering to exchanging, asset management, and custody, but now says it can’t compete in the exchange business.