Whichever way, it will be a reality that the Bitcoin SV network must contend with until it becomes the dominant SHA256 hashpower chain.

Much excitement is going on in the Bitcoin SV ecosystem recently, as a new regime of economic reality has been entered. For about six months or so, it has consistently been more profitable to point your SHA256 hash to mine BSV instead of BTC, but in the last two months, it has been markedly so—importantly, the average is 16% more profitable on BSV (with spikes up to >110%). This has caused the inevitable reality where some SHA256 miners will switch their mining to BSV from BTC in pursuit of bigger profit margins.

However, there is a problem, because of the exceptionally low fee endemic in the current BSV ecosystem, the amount of block reward in fees for most of the transactions hardly make it worthwhile for a miner to put into blocks. What’s more, a 4GB block filled with millions of low fee paying transactions costs more to process (by way of time to validate, translating to orphan risk) than an empty block, so this economic reality has resulted in a recent large hash miner to simply mine empty blocks on BSV for several long stretches of time, to the detriment of the ecosystem.

The problem though, is that this is affecting the proper functioning of the network for the application and user base, who have been slowly accustomed to paying extremely low txn fees and putting huge amounts of data on chain, exploiting the willingness of the existing miners to continually lower their fee rates in an attempt to encourage more usage, and also to win market share vs their competitors in a fee race to zero. Fees on BSV have dropped over the last two years from 1sat/byte to 0.05sat/byte.

The trouble is, the existing miners, in terms of hash rate are but less than 0.5% of that total hash available in the world. So in essence, in terms of a global hash market, they are a couple of goldfish fighting for territory in their own bowl… who have been suddenly dumped into the ocean[1].

Much excitement has arisen surrounding this activity including claims that the miner may be a malicious attacker acting to aggrieve BSV users and businesses from fair use of the system, to that of just a miner that is acting in protest to the current economic reality of the network. It is indeed hard to tell without the miner’s intentions being made public. If the behaviour is deemed to have the same effects as a Denial of Service attack, then the miner would be in violation of cybercrime laws, and may be criminally liable.

All this was the case leading up to the Bitcoin Association stepping with a statement stating their intention to defend the BSV network if it turns out that the miner’s intentions are indeed malicious, calling for them to make these intentions known. The go as far as stating that they stood ready to take legal action if the miner would not make their intentions known, as there is really no way to determine whether a miner is just boycotting the current fee rates, or deliberately trying to disrupt businesses running on BSV. Although their statement did draw a number of criticisms by some in the community, in my opinion their show of strong resolve was a welcome signal to the ecosystem, and the market as a whole, as the Association signaled their full intent to fulfil their role as stewards of the network, and willing to step in when the existing mining infrastructure players fail to “play by the rules.” It was a shot across the bow…, and much needed to instill a sense of confidence in many of the businesses that was wondering whether or not the system can be trusted to be reliable in the face of hash power volatility, and evolving miner dynamics.

As if that wasn’t enough drama, on Oct 18, the EBM (empty block miner) printed a block with a message that could lend a clue to their intent. This seemingly to be a response to the association’s calls to identify themselves. Which would corroborate a theory that they were just rejecting txns that didn’t pay the requisite minimum fee rate that they would accept. 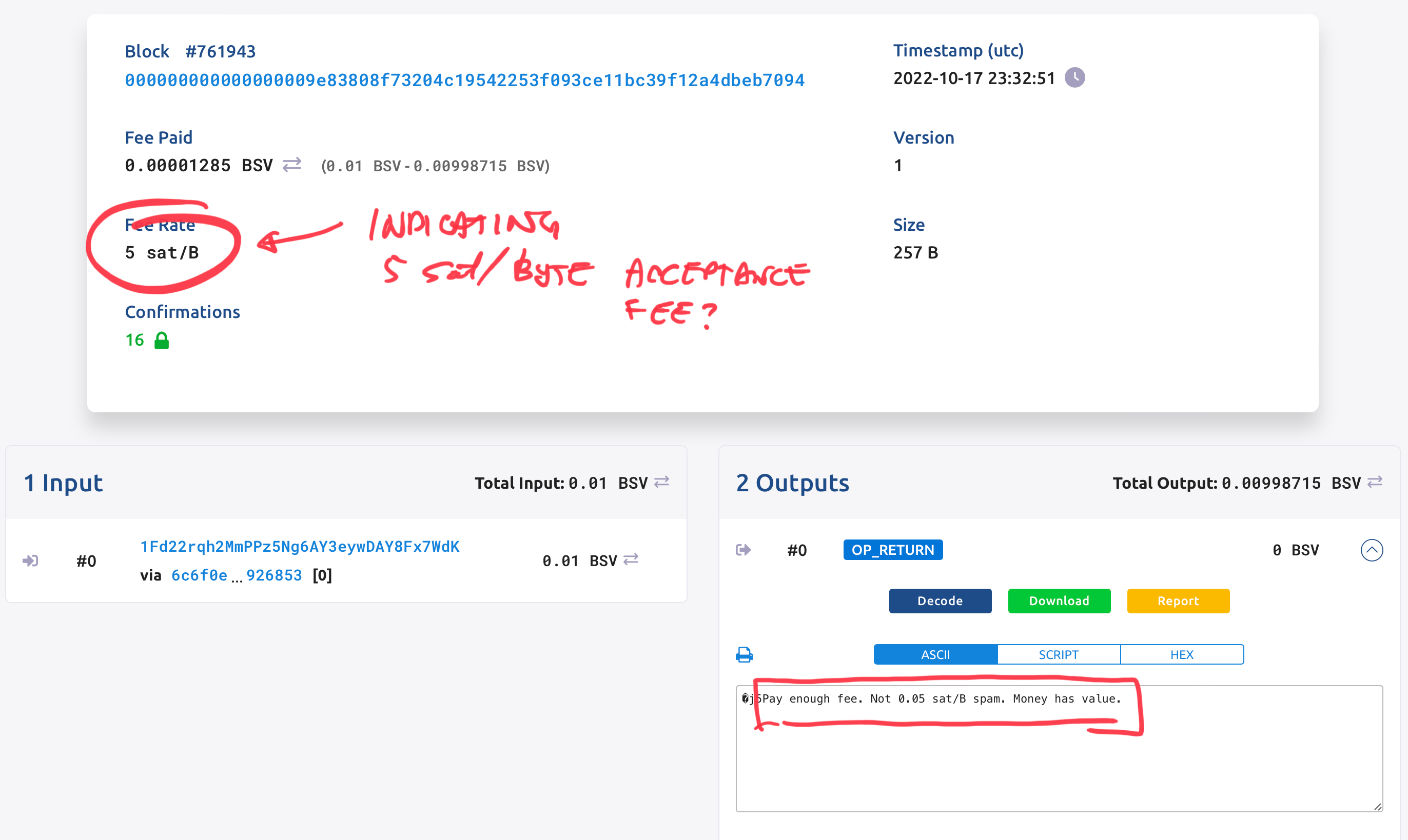 This has established several facts:

This, at least is moving forward (rather than backwards or stalemate), and while it does not yet rule out that this is a malicious acting miner whose sole intent is to disrupt transaction processing on BSV, would seem to indicate that they are just exercising their economic muscle to raise the base fee rate of the network, assuming that they are actually willing and have shown to accept txns which pay this requisite fee. What remains to do is to test that rate theory.

But is it fair to allow a majority hash rate miner to dictate what the fee rate should be on the network? Can the big empty block miner just call all the shots in what the users should need to pay to get their blocks in the chain?

Well yes, of course they can.

That is by right of them having more hashpower under their control, within their rights to dictate fee rates. This is the free market at work. While the incumbent BSV miners have been fighting among themselves trying to win clients with ever lower fees, they have ignored the biggest elephant[2] in the room which is that until BSV has the majority of ALL the available SHA256 hashpower on earth, there will ALWAYS be the case when more miners start adopting BSV (by choosing to mine it) that the incumbent fee market will be disrupted (let’s call it—readjusted… to be more kind). But the way in which this is done—simply to reject transactions that don’t pay enough according to what you want is rather disruptive, and we could likely do better.

What if sometime in the future a bigger amount of hashpower were to come onboard BSV and start demanding 10sat/byte fees? Well of course it will be their prerogative to do so, and it is also the prerogative of existing mining ecosystem to try to punish them by refusing to accept their payout transactions. While some may see this dynamic as chaotic, I rather like to think of it as the messy business of price discovery in a competitive market. In the end, how is it different from a group of validators on a proof of stake ETH from just arbitrarily raising the minimum gas fees in order to enrich themselves? Would a portion of the network be in their rights to willingly boycott this validator bloc? Of course they would be, and this would naturally cause a fork in the chain. This is just the nature of blockchains, and how a distributed network without coordination finds the middle way…

What the ecosystem should do, indeed there is a market opportunity for, is to develop tools and middleware systems that buffer end users from these potential disruptions in the network due to fee market competition among miners, for without these tools, how would we ever hope to grow a legally compliant global system which is driven only by free market dynamics?

The end take away is that the BSV community should get used to the fact that as long as there is a dominant amount of ‘fallow[3]’ hashpower that can jump in at any time, they need to accept that as they join, the majority hash have the power to disrupt the network. That will translate into predictable fee volatility for BSV users and applications in the future, at least until all the fallow hashpower have completely converted over to mining BSV exclusively (because it will be no longer economically viable to mine BTC and BCH) or shutdown to lie in wait until the time when BSV prices rise to the levels to demand that much hashpower mining it. It is just a reality that we will never be able to clearly discern a malicious miner looking to DoS the BSV ecosystem vs one which is just ignorant and profit-mongering… but there is a tried-and-true process to test—keep raising the fee rate until a txn is accepted into their block. If no reasonable rate paying fee is accepted and they have not made clear their terms, then they will be likely judged to be malicious, and the honest miners in the network should orphan their blocks. This is just the reality of the economics. Until the legality of selfishly profiting from mining empty blocks simply for the subsidy has been given precedence, it will just be a judgement call by the honest miners in the network whether or not to collectively punish newcomer miners who don’t play by the implicit rules.

In the grand scale, the reality is that there is 99% of the global hashpower mining something other than Bitcoin SV. If Bitcoin SV plans to grow to be the dominant Bitcoin used in the world, (and is the only one capable of scaling to the level of doing so) then it must have a strategy of how to deal with incoming new miners who simply want the fee rate to be higher or are making a selfish grab for coins. How this ‘new node’ onboarding is handled will be tricky in a distributed unmanaged network where discerning intent will be critical, but one thing is for sure, the role to be played by the Bitcoin Association will become more and more important in mediating these transitions going into the future, and all eyes will be on them to see how well they do at their role of steward of the network.

[1] To be fair, it’s more like a big shark has jumped into their fishbowl, but that analogy doesn’t seem to have the same bite. (Ha!)

[3] From the perspective of BSV miners, all hashpower mining other SHA256 chains are fallow hash.