Ethereum founder Vitalik Buterin pointed out how unfortunate this is, and called on the Twitter and Ethereum community to do something about it.

It has been a trend for scambots to “tailgate” on well-known cryptocurrency personalities’ tweets, using their profile photos and a Twitter handle that resembles the real person’s as closely as possible. These bots would follow legitimate industry names’ tweets and immediately post malicious links on the comments section of the thread in an attempt to mislead followers into thinking they were posted by the original Twitter account.

They usually tempt users with flamboyant giveaways, like this: 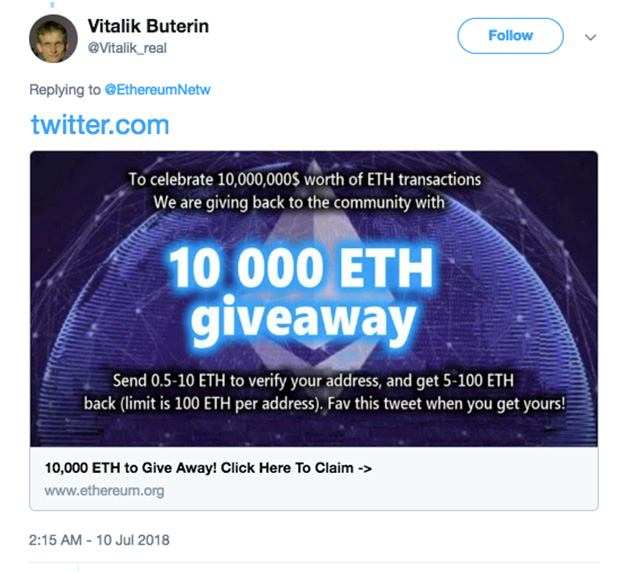 While most users are adept at spotting legitimate accounts from fake ones (the check mark is a very prominent distinguishing feature, for one), those who have untrained eyes fall for the sham. This could lead to a loss of funds, if the phishing attempt succeeds in duping the user into clicking the link and punching in his user name and password to a decoy website. The scammers then gain access to the user’s credentials which can be used to steal funds from online accounts.
It has become rampant that in fact, Buterin changed his Twitter name to Vitalik “Not giving away ETH” Buterin for this very reason. The scambot armies haven’t spared Musk either. It has been going on for a while and that’s what prompted the “mad skillz” tweet.

“I want to know who is running the Etherium scambots! Mad skillz…,” Musk tweeted.

I want to know who is running the Etherium scambots! Mad skillz …

Ethereum founder Vitalik Buterin picked up on the tweet, pointing out how unfortunate this is tagging Twitter founder and CEO Jack Dorsey and appealing to the Ethereum community to come up with a solution.

I do wish @elonmusk's first tweet about ethereum was about the tech rather than the twitter scambots……..@jack help us please? Or someone from the ETH community make a layer 2 scam filtering solution, please? https://t.co/biVRshZmne

Twitter users responded with solutions like EtherScamDB—a database where users can report known scams so they can be monitored and listed on the “active scams” list, as well as a project called Metacert Protocol.

“We have a secret app monitoring accounts for some high profile crypto people, auto blocking scammers on their behalf while also alerting followers inside replies, when there’s a fake account. We can help Vitalik,” Metacert replied. “We also now monitor the twitter firehose for scam signals but can’t say more than that in public.”

Bryan Daugherty and Energy News Beat's Turley explores how blockchain solves the greenwashing problem in the ESG world, the value of blockchain technology, and more.

To celebrate his 2,000 subscribers on his YouTube channel, Joshua Henslee did a three-part "Ask Me Anything" episode where he answered questions about Bitcoin, digital currencies, and blockchain.

Digital asset hedge fund Three Arrows Capital, which had been around since 2012, now appears to be dragging other industry names into its whirlpool.

As revealed by Chin-long, the central bank is exploring how to scale the system's operational performance and the feasibility of offline payment options to boost the resilience of the CBDC.