Elon Musk, after a weekend of pushing Dogecoin back into the limelight, has announced that Tesla bought 1.5 billion dollars’ worth of BTC which he intends to do nothing with so that it will lose velocity on the company books for the foreseeable future.

In unison, the simps squealed praises to yet another billionaire who they think they are front-running, and the rabble of low quality influencers rejoiced the way they always do…

Without being overly critical of Mr. Musk, it’s clear that folks like Michael Saylor, Anthony Pompliano and Mike Novogratz have been successful at selling their narrative: if you’re a company or a person with excessive wealth, hold it in BTC instead of dollars.

But why would a company move their liquid purchasing power into an illiquid, spuriously regulated, difficult asset to spend? Well, they presume that since the dollar is on the brink of imminent devaluation and that the global economy is nearing total collapse, the best way to become a member of the oligarchy of the future is to buy BTC and let it absorb value until everyone that doesn’t hold at least one whole coin will be a slave to someone who does.

So, BTC is not about creation of value, it is about absorption of value and a race to control the supply—and therefore control the future lives of the nocoiners. This has been written about in greater detail before.

Why didn’t Musk look at BSV?

Elon does not see the value of global frictionless payments, or exponentially increased data integrity. He also does not understand why an unchangeable ledger of everything connected to a distributed supercomputer would have value.

The reason for this is that he probably doesn’t have any projects that could benefit from creating a tokenized digital twin of every vehicle that he manufactures which could interface automatically with location data to allow for increased safety and reliability of self-driving cars, tunnels or tokenized objects in cryptographically secured smart cities. There’s also no profit motive for Tesla to sell devices to non-Tesla vehicles which could integrate into GPS and IoT systems which could reward drivers for proving their participation in carpooling with their digital identities or incentivize the discovery of eco-friendly routes by providing instant traffic intelligence incentives to proactively engage through monetized or tokenized reward structures which could also act as a revenue source for his company.

He also wouldn’t be interested in using that vehicle’s digital identity to connect into a public database where service intervals, accident reporting or even car washes could be time-stamped so that the resale value of the vehicle could include the immutable proof of the services rendered so that the verifiable history of the vehicle could be exponentially more valuable than using CarFax.

There’s also no reason he might be interested in tokenizing Tesla loyalty memberships that connect to smart wallets which allow Tesla owners to connect to each other directly and securely or for the company to hand out experience points for superlatives which gamify the Tesla ownership experience.

Imagine receiving a rare NFT trophy for being the first Tesla X owner to drive to all 50 states! They also wouldn’t be interested in playing scavenger hunts across the highways of the world to be the first to discover provably scarce bonuses that exist in the augmented reality space, because Tesla owners would never think something so trivial as a monetized, gamified driving experience would be any fun at all. Totally uninteresting. Tesla owners probably just want Tesla, Inc to “Hodl BTC.” 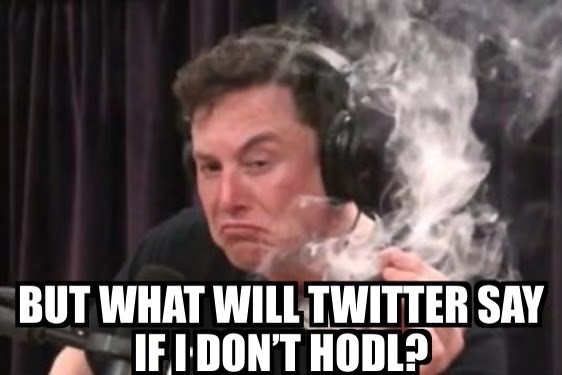 There’s also no reason Musk would be interested in verifying the supply chain of where the rare earth metals are mined which go into the manufacture of his cars, because there is no value added to his clients who might care about the hidden environmental costs of mining for lithium, cobalt and other ecologically impactful materials. There is also no way he would be interested in saving costs across his global supply chain by speeding up cash flow or passing paperwork across multiple jurisdictions more rapidly than they are doing it today.

And since there’s no way he would be interested in those things, he obviously wouldn’t be interested in paying his global staff instantly with either fiat tokens, Tesla credit tokens or bitcoin itself and streamlining his entire, global HR experience because Musk isn’t really the kind of visionary leader that looks for new efficiencies with cutting edge technology.

And that’s just at Tesla!

Musk is probably also not interested in making sure that his AI projects are properly incentivized through proof of work, nor would he want to make sure that Neuralink can’t be hacked because it’s secured to a cryptographically secure digital identity. SpaceX certainly couldn’t benefit from a world computer that can stream money, commands or programs to and from anywhere on earth or via any communications channel at 250 kilobytes per cryptographically secure transaction!

There’s also no way he would want to have the quality of his drug research verified, nor the management of his robots nor anything else across his IoT vision underpinned by nano-payments or secure streaming data. He couldn’t possibly want to integrate micropayments for if-this-then-that functions and interactions of his micro and macro devices’ interoperability across the global economy, because that would be far too interesting for a man that just wants to let BTC sit on the company ledger and do nothing but hopefully absorb more value than it loses.

Remember, Elon Musk isn’t interested in being able to manage all of these things from a single network secured by proof of work and allowing all data points on the planet to be instantly accessible, monetized, tokenized, repurposed or deployed across an increasingly digital economy where the ownership of data becomes the cornerstone of absolutely everything!

Bitcoin SV is the underlying fabric of the digital future for business, communication, computation, and salvation from the current power structures of the world, and that just isn’t very interesting to that kind of a guy.

Elon has BTC now. And if he wants, he can spend it someday just as long as the rest of the planet isn’t also trying to broadcast more than 6 megabytes per hour at the same time. Then he can’t spend it, because that’s just how BTC works now.