There is a very real distinction between the worldviews of the small blockers versus that of the big blockers. Small blockers worship scarcity and thermodynamic security in a way which mirrors pagan beliefs about Moloch harnessing fire for the betterment of the ruling elite. Small block influencers set themselves apart from everyone by demanding social and rhetorical purity. They sanctify themselves by having rigid dietary laws, surrounding themselves with religious symbolism and pressuring people into feeling inferior for lacking proximity to their exclusive thoughts and lifestyle around BTC.

BTC, and its toxicity

The small blockers talk about BTC’s exclusive use as savings technology for non-poor people and the inevitability of establishing a citadel—floating in space to separate themselves from the ravaged hellscape that they will have left behind for the no-coiners. They believe Satoshi Nakamoto was a hardline monetary activist who gave the cypherpunks a community-driven project with which to avoid taxation and the inflationary aspects of fiat currency. They also believe that Bitcoin was designed to be an anarchist-influenced hard money utilized almost exclusively as a store of value—often calling it “digital gold.”

To that end, they believe that governance should be removed from the productive class of honest nodes, and handed to each individual to govern as a commune for the good of the holders but to the detriment of anyone who wished to build anything with high throughput on the network.

Citing Gresham’s Law, ignoring Moore’s Law and believing that the Lindy Effect defines all human behavior, the culture of the small blockers is one that views the world as bleak and heading toward imminent collapse. When this happens, they plan to rise to their rightful place as the new globalist hierarchy because they had the audacity to “hodl” through their self-actualized epoch of front-running the banks, finance titans and the entrepreneurial elite—therefore holding the keys to power over the new world order. In that sense, the trajectory of BTC harkens to the worldview of Elysium (the movie, not the Greek afterlife): a place where the elite live in a wealthy paradise based on their control of scarce assets enshrined in complex technology that gives them leverage over the vast working class who live in squalor to mine for the benefit of the “citizens of Elysium.” 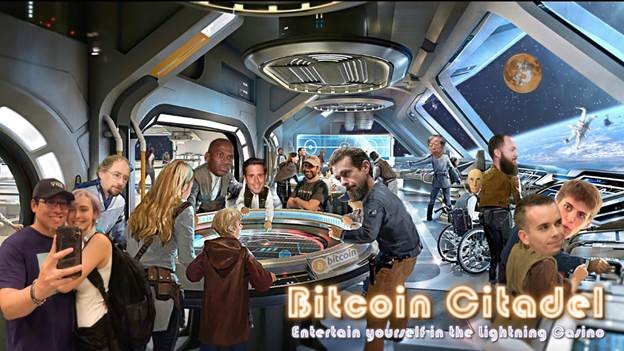 BSV: Hope for all of humanity

In contrast, the big blockers think of Satoshi Nakamoto as a Henry Rearden type figure: a man forged in the fire that is entrepreneurial fervor—with sound mind and insatiable work ethic. Surrounded by lazy looters, Satoshi/Rearden is a man of broad shoulders bearing the burden of a world who cannot understand his motivations, but who works tirelessly to improve reality because of his drive for excellence and profit. To the big blocker, Bitcoin is a powerful commodity created with an incredible cost in order to liberate economic inefficiencies that could not otherwise be given to the world. As a means of exchange, Bitcoin is akin to “Rearden Metal” as a tool for economic advancement, competition and profit seeking. It is a tool to make the world smaller by giving it incredible connectivity so that it is easier for economic actors to compete and cooperate to create excess value which can be sold to the world.

We believe that through economic efficiency, markets will be opened up for business, raising an unprecedented number of people out of poverty through the creation of wealth. From an unfortunate exile of necessity, like Galt’s Gulch, the builders in the Bitcoin SV economy work with nearly science-fiction-level technology to build profitable and truly valuable tools for the world; tools that anyone can use for simple commerce or for extremely progressive feats of economic wizardry—not unlike John Galt’s electric motor.

Do these views matter?

Yes, worldview is a powerful indicator for determining the direction of the entire culture. BTC holders are incentivized to see the world collapse into chaos, while the Bitcoin SV (BSV) economy is incentivized to shine a light into the darkness and create a world safe for the expansion of honest nodes and honest business. This is why the protocol has been hamstrung to 5-7 transactions per second and fees that only make sense for the wealthy to use the BTC network. Their worldview created incentives which led to an elitist’s network.

With Bitcoin SV, efficiency and connectivity create unparalleled access to the economy and the truth. Anyone can send transactions. From the smallest unit of the Vietnamese “Dong” currency, to a billion dollars’ worth of micropayments across a streaming economy of value, BSV is the currency for EVERYONE!

With the global ledger that scales, people can trust their elections, secure their privacy and identity rights while they work safely to create value with a sound money: the scarce digital commodity of bitcoin. We can also build special purpose currencies that tie to the global network to fulfill incredible economic goals that lead to an incredible creation of wealth. With nearly the entire culture of looters pitted against the producers of BSV, we fight to change the world for the better.

The moral imperative of Bitcoin SV’s adoption may be more important than the wealth of the individual investor, but we too believe in the incredible wealth opportunity of a provably scarce asset. We simply believe that with its power set in stone, it can also create an era of wealth expansion for the world, if we only dare to reach for it. And with that economic expansion, everyone becomes wealthy, including the old holders.

If the small blockers succeed in ending the bitcoin struggle, and implement their views on the global economy, they are likely to usher in a new era of extreme stratification which would be difficult to ever overcome – causing poverty and enslavement for most of the world. This is a crucial point to understand and hold tightly as The Bitcoin Civil War rages on. In stark contrast to the small blockers, the big blockers of BSV intend to circulate Bitcoin to the entire world by any means possible in order to create customers where others would wage wars. We fight to incentivize the creation of peace, prosperity and transparency that will benefit the whole of mankind.

Please join us in this fight for the soul of Bitcoin!