From the recent FTX implosion to looming regulations and the dire need to fortify cybersecurity, Growth Lead at BlockchainSpace Jen Bilango, Cryptocurrency Investor Chris Tan, Patty Tiu of Thompson Collective Inc., Hacktive CEO and Bayanichain CTO Paul Soliman, GCrypto Partnerships Mark Nunez, and Internet Protocol Manila Nelson Lumbres had all the answers. But before they stepped foot onto the grand stage, attendees were given a brief overview of the Bitcoin and blockchain industry.

Opening the event, dubbed Bull or Bear: Philippine Web3 Debate, Lumbres, as the first keynote speaker, discussed the fundamentals of blockchain in Web3, beginning with the IBM definition of what blockchain is—a shared, immutable ledger that facilitates the process of recording transactions and tracking assets in a business network.

Citing a recent poll conducted by Dr. Angela Yu, a coding expert and lead instructor at online learning marketplace Udemy, Lumbres said 44.6% of Filipino youth had shown interest in learning about blockchain and Web3 this year, likely due to the industry’s mouthwatering salary offer, which could go as high as $120,000 for a junior developer. In 2022 alone, the Philippines saw the number of blockchain developers grow by a staggering 33% and active developers in Web3 peaking at around 18,416 monthly.

“I think we’re on the bleeding edge of technology right now, and the opportunity is there for us—anywhere in the world, actually,” said Lumbres before posing a question of whether the Philippines think of these emerging technologies as the future, and if so, would Filipinos want to be at the forefront of the exploration and adoption race? 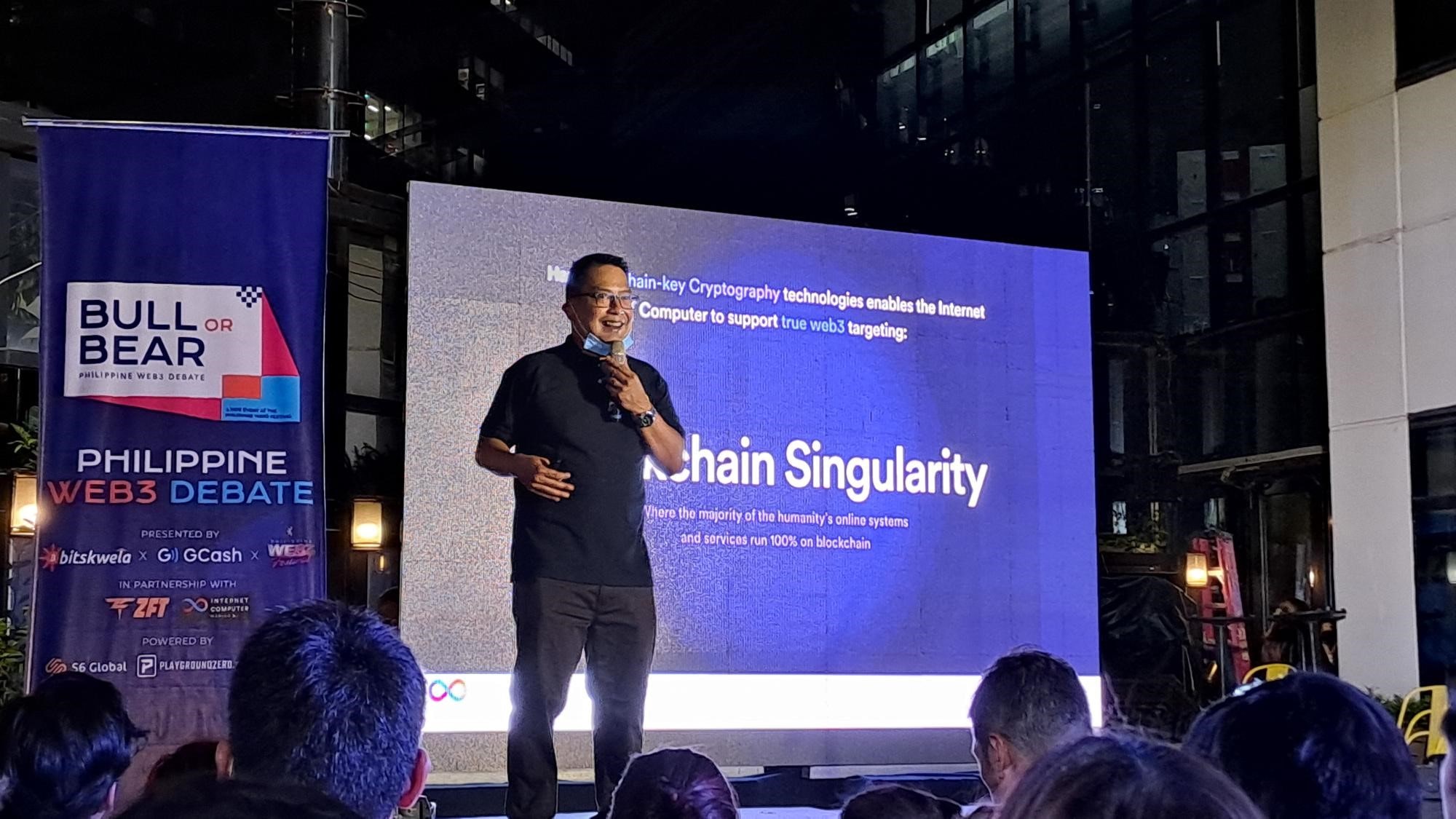 Nelson Lumbres of the Internet Protocol of Manila

From blockchain, Lumbres then jumped to discussing about Web3, which global experts coined as the next iteration of the Internet, incorporating the concepts of decentralization, blockchain, and token-based economics. From this definition, he noted that Web3 is about owning a piece of the world wide web.

“The Web3 is something that we can build on right now,” Lumbres added.

The ups, downs, and merry-go-round of market trading

An interactive conversation about the market cycles was kicked off by the second keynote speaker, ZFT Corporation CEO George Asibal, asking participants about play-to-earn and non-fungible token (NFT) games and who among the crowd owns and has investments in ‘crypto.’

During his 15-minute speech, Asibal stressed that the digital asset industry has become exciting as more people from different demographics get on board. However, he pointed out that it has become more challenging to “filter out the noise,” determining what trends you should bet your money on, which ones are real, and when you should HODL and let go. 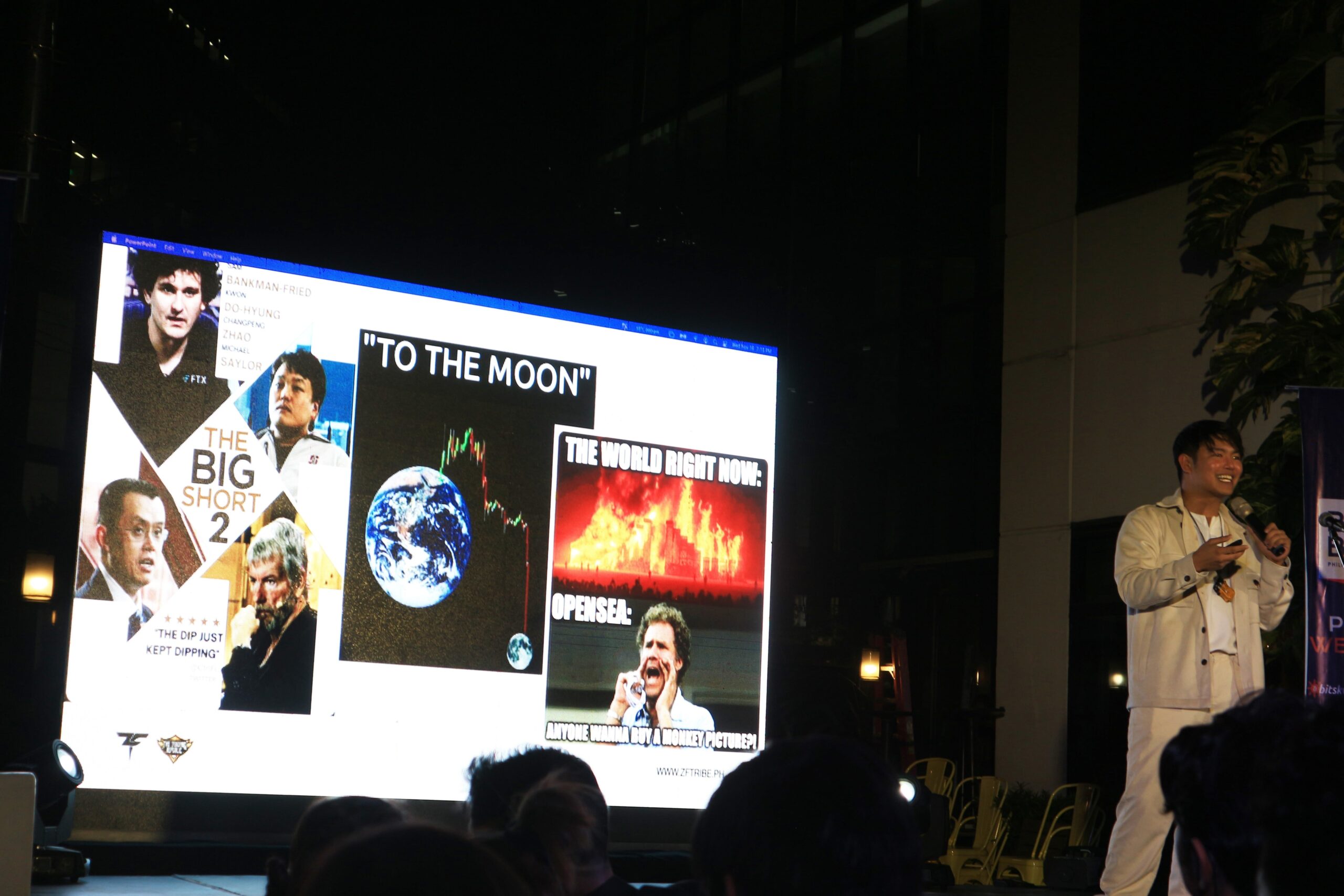 As a trading consultant, Asibal said the main reason people lose money in the ‘crypto’ space is their lack of understanding of the industry, including market trends and what type of investor they are.

He then presented a number of charts and used them to help attendees learn how to determine whether the market is bullish or bearish.

Ending the discussion, Asibal likened investing and trading to joining the Olympics.

“If you want to make money in this industry, you have to think of it as you are in the Olympics. In the Olympics, there’s a lot of ways to make gold; you just have to find what suits you and then play to your strengths,” he said before leaving the podium with a quick remark: “One thing is for sure — crypto, Web3 — it’s inevitable. The future is crypto, and it’s here.”

Head of Developer Ecosystem and Bitskwela board member and strategic advisor Darlene Torres was the last keynote speaker of the night before the debate, starting her speech with a reminiscent of her childhood days in computer shops – a place where most Filipino youths spend their free time playing strategic and multiplayer games such as Counter-strike, League of Legends, and DOTA, and the place she first learned about Bitcoin.

Citing her experience, Torres said today’s generation relies heavily on the Internet for information, and with the rise of NFT and P2E games, more children are using them to get their education. Because of this, Torres believes that the Philippine government should focus more on strengthening education than regulation.

“How can one authority regulate information that it does not understand?” Torres questioned, an apparent hit to the local administration and global leaders trying to control the asset class. Darlene Torres, head of developer ecosystem, board member and strategic advisor of Bitskwela

She also reiterated her 2021 speech at a conference in Abu Dhabi, where she urged governments “to stop looking at blockchain contributors as a threat but instead as collaborators to solve modern problems.”

Torres said she believes that the Filipino youth should be exposed and taught about ‘crypto,’ claiming that this would help spur the country’s gross domestic product while the inclusiveness provided by the blockchain industry can level the playing field for economies. The governments of India and the United Arab Emirates, which have seen incredible growth during the pandemic after embracing tech, are models that should be emulated, said Torres.

“Let us stop looking at blockchain and cryptocurrencies as just currencies but instead as an underlying of information, communication, and technology,” Torres said, borrowing the lines of His Excellency Gabriel Abed, Ambassador of Barbados to the UAE.

The night was still young when debaters hopped into the stage for the main event, with Kenji Tate, a veteran debater from the Ateneo de Manila University, as the moderator.

Debaters were given a flippable stand bearing the colors green and red. For every question asked, they will have 10 seconds to decide whether they agree/bullish or disagree/bearish about the statement. Each speaker will only have two minutes to explain their stance.

The debate ran for over an hour, focusing on Bitcoin as a legal tender and privacy within the space, but it was put to a halt by an unexpected downpour.

Q: Should Bitcoin be legal tender in the Philippines?

For Lumbres, Bitcoin provides a seamless peer-to-peer transaction—a massive transformation to the payments industry that will challenge existing wallets such GCash and Maya, thus the need to be adopted. However, he noted that the current situation in the sector would likely push back the adoption of Bitcoin but stressed that eventually, “it will happen soon.”

Nunez, meanwhile, said he was bearish on Bitcoin becoming a legal tender due to its volatility and the Philippines’ lack of infrastructure to accommodate such a feat.

Soliman echoed Lumbres and Nunez’s remarks, saying that the Philippines is slowly recognizing the value of Bitcoin but stopped short of saying that this is not the right time to use it in the country as currency, noting that the government should first craft policies on how digital assets can be taxed. 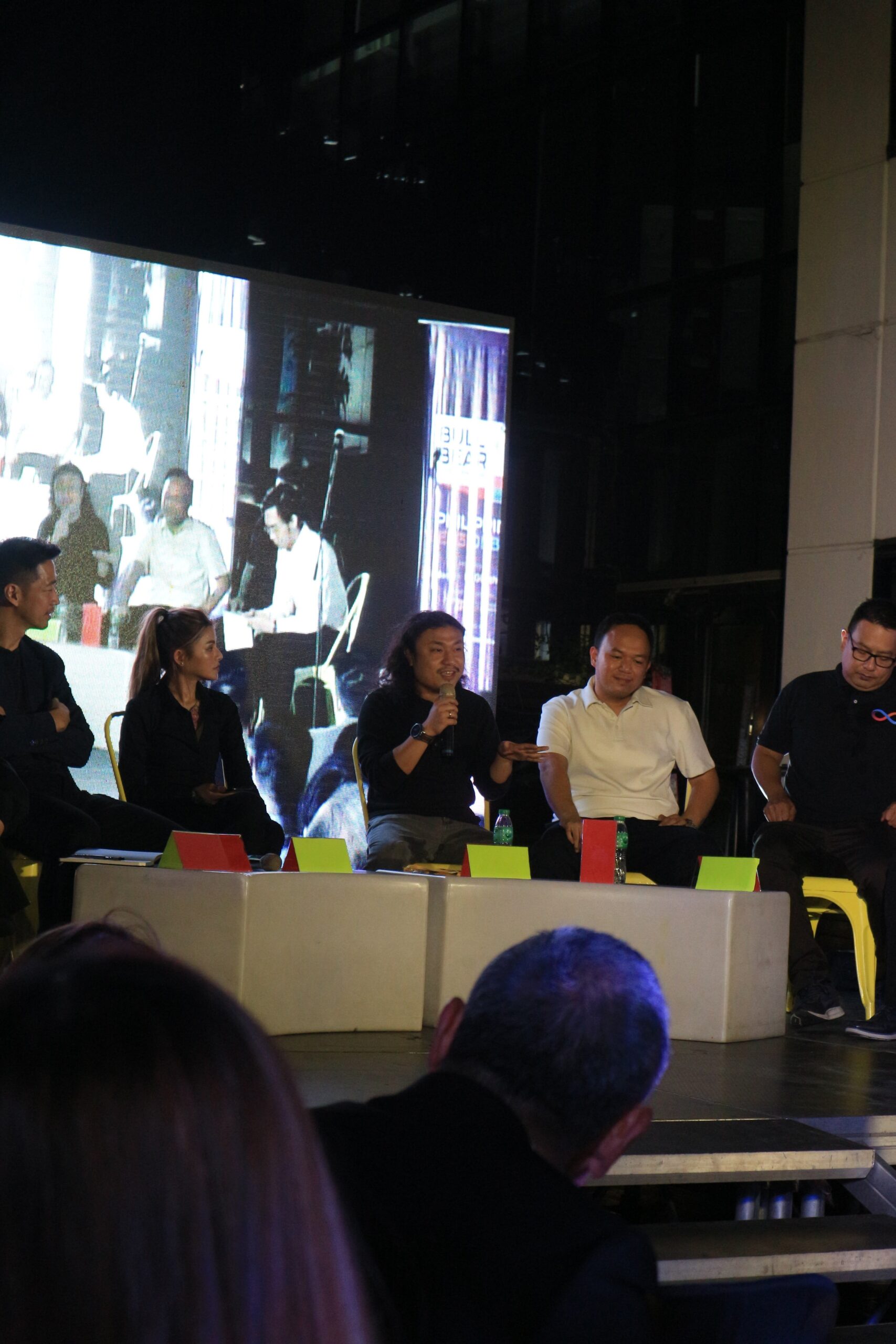 Paul Soliman giving his stance on Bitcoin as a legal tender

Tiu is bullish on the matter but, like Soliman, stressed that now is not the right time, adding that it is essential for the public to understand and know the risks associated with digital currencies before getting into it.

Vlogger Tan said he has always been a bull on making Bitcoin a legal tender but, similar to the stance of four early debaters, said Bitcoin’s current volatility makes it hard for people to see its actual value. He added that BTC is more of a digital gold than a currency.

“I don’t look at it as something I want to spend. I like to hold my Bitcoin, and I like to hold it for a very long time,” he said, adding that the only time he can see Bitcoin as a legal tender is when it has matured and that the volatility it carries has minimized.

Ending the first round of debate was Bilango, who claimed that the jargon being thrown around the space had delineated the blockchain and Bitcoin. She noted that BTC, or any other digital currencies, should not be legal tender in the Philippines because of the lack of stability in the ecosystem, which the government heavily relies on to keep the economy afloat. She, however, insisted that she is bullish on the technology itself, specifically blockchain.

Following up on the matter, Tan again acknowledged the volatility of Bitcoin and was quick to point out that governments are also contributing to its volatile nature by dipping their hands into a fiscal and monetary system that they know nothing about.

“Bitcoin is the purest form of money that is sovereign to the person, not to the government,” he insisted.

Q: Should private and sensitive information be stored on NFTs as IDs in the Philippines?

Nunez was the first brave soul to answer the question, saying that NFTs will be of good use for the healthcare and travel industry and will be of big help to foreigners who have no records in the state they are in. Mark Nunez gives his take on the use case of NFTs

But for Lumbres, the answer to the question lies with the public and whether they are comfortable sharing their personal information with others. Acknowledging the use-cases of NFTs, he explained that it may still be utilized despite the majority of the population disagreeing with it and only keeping information that users are okay with being accessed.

Tiu seconded Lumbres, saying that the solution for this is to only select information that an individual chooses to share publicly. She also highlighted how NFTs as IDs could address the complicated process of paperwork in government agencies, such as getting a National Bureau of Investigation (NBI) clearance and obtaining benefits from the Social Security System (SSS).

On the other hand, Soliman was 50/50 on the matter, explaining that some information, such as mobile numbers, should not be out in the open while some details, including house blocks or addresses, are fine being made public.

“At the end of the day, it’s gonna be public or private chain,” said Soliman.

Meanwhile, Tan envisioned a future where every child born would have NFTs where all their information is stored until they got older. While bullish about the idea, Tan said using NFTs as IDs could pose potential risks to users. In the case of the Philippines, he said that the administration could not be trusted enough to utilize this technology. 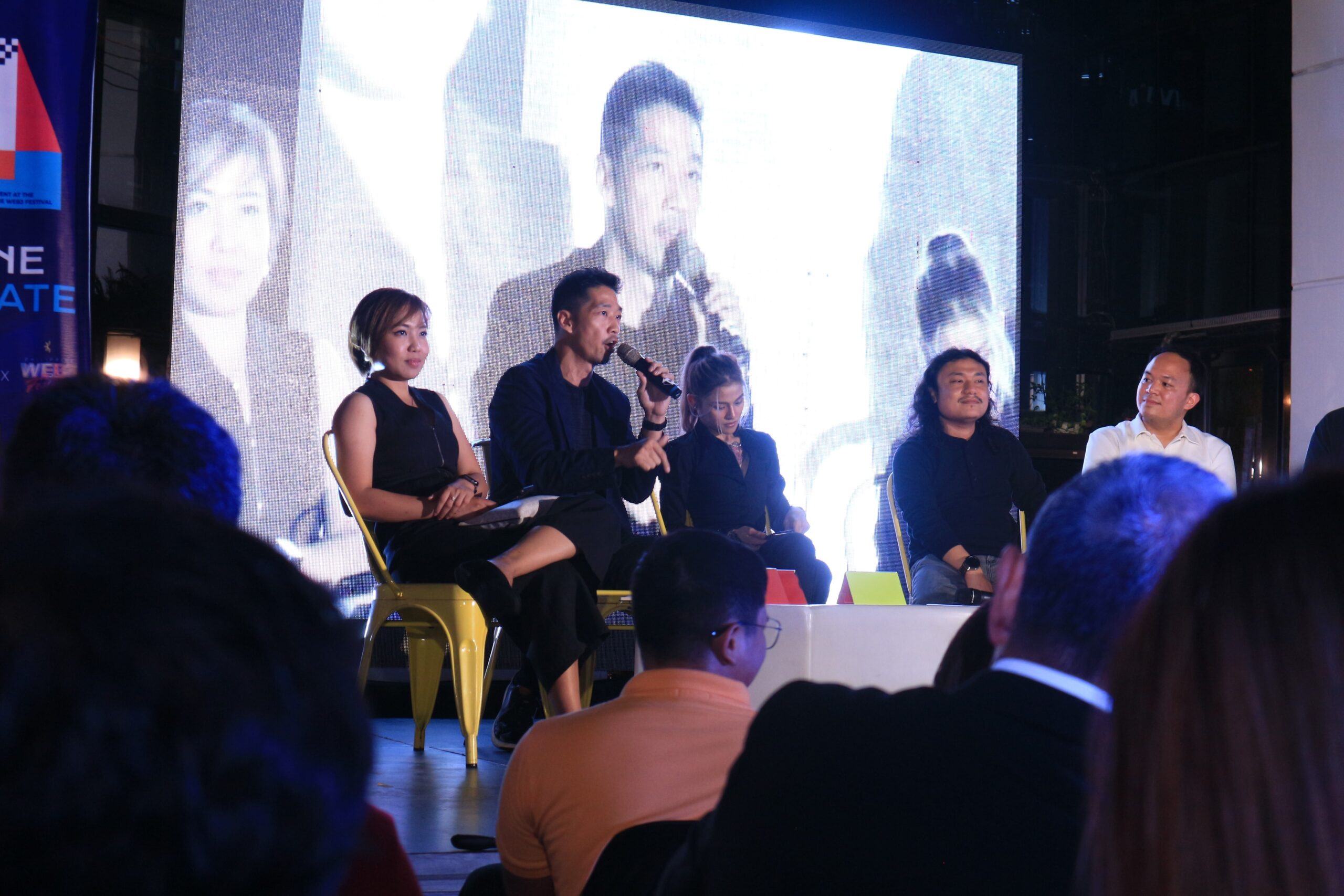 “As we can see right now, our country, unfortunately, is prone to abuse, and information like that can easily be used by the government against your own people,” Tan explained. “There’s a big disparity between the powerful—the government—and the masses, and this is a very, very dangerous tool that can be used.”

Bilango countered Tan’s statement with a question: What prevents the government from doing it now, considering they all have every Filipino’s information on their database?

Bilango stressed that she is “very bullish” about this because of the immutability of blockchain and the ease of verifying transactions but agreed with Soliman that there should be a public and private chain.