Bitcoin (BSV) today reached a major landmark: 1 billion total transactions. The figure draws a stark contrast between BSV and those seen as its rivals, like BTC and Ethereum. While the latter two networks have struggled with transaction limits, protocol model changes, congestion and high fees, BSV’s data indicates it can continue growing in this manner indefinitely without issue.

That milestone follows significant growth in BSV transactions over the past six months, although that growth has been on a similar trajectory since 2019. Since separating its development from BTC in 2017 and from BCH in 2018, Bitcoin (BSV) has removed protocol limits on transaction sizes and counts. This has enabled a working “data economy” model where low fees at extremely high volumes provide revenue to users, developers, and the transaction processors (miners) that keep the network secure. 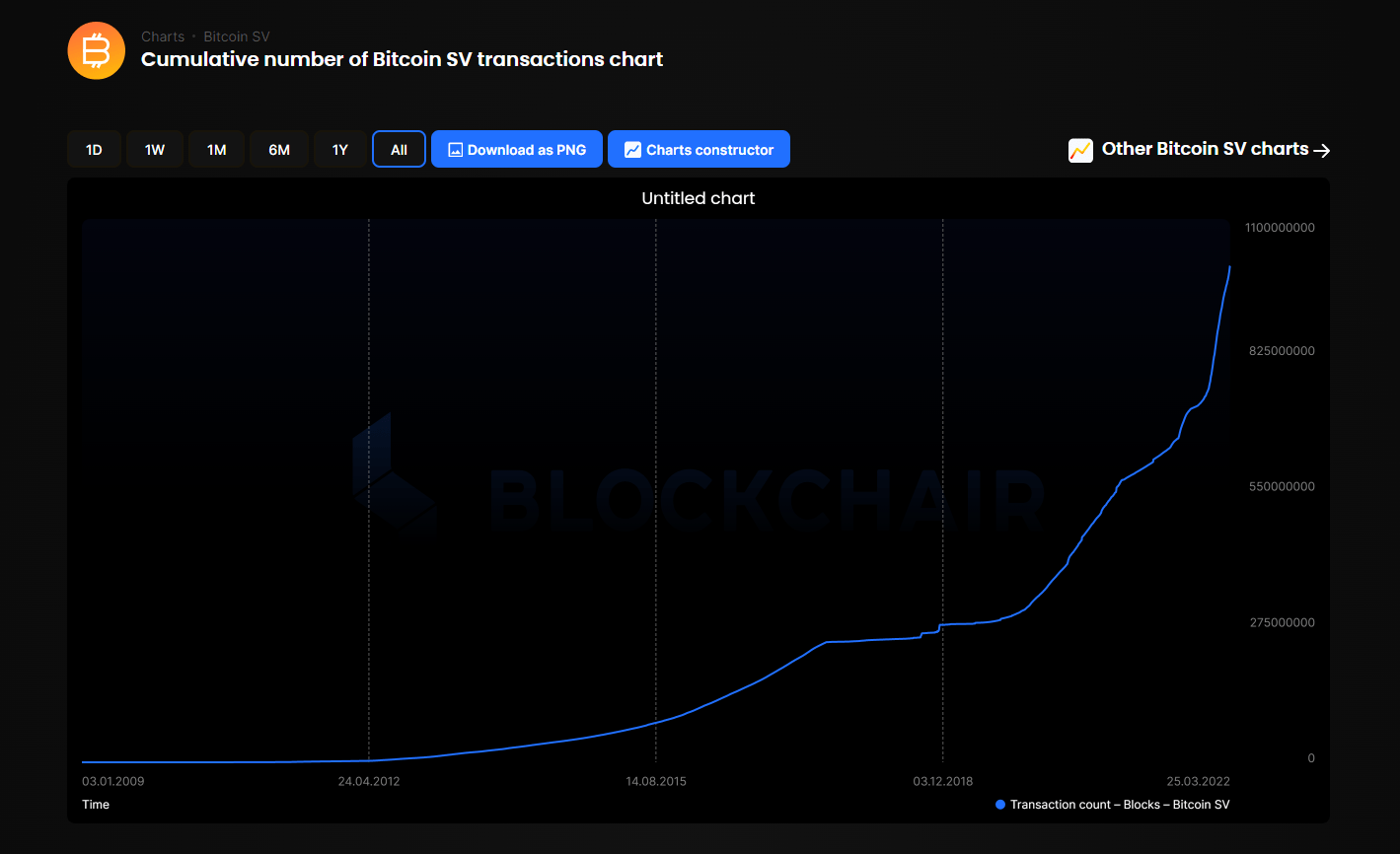 BSV has also achieved this by retaining the more trustworthy proof of work (PoW) processing model, which keeps its miners honest through the investments they make in physical infrastructure. It also becomes more energy efficient as use cases of blockchain technology at scale expand which will significantly increase the number of daily transactions beyond what we are witnessing today on BSV. Others have used (or are attempting to switch to) the far less trustworthy proof-of-stake (PoS) model, based essentially on digital bearer shares and token investments that can hide the true size and power of influential players.

BSV is frequently compared to BTC and Ethereum (the world’s best-known computing and smart contract blockchain). Ethereum has operated publicly since 2015, and has over 1.5 billion transactions recorded. However the daily transaction count charts also show BSV is gaining fast on that number. While Ethereum’s total transaction number has grown steadily over the past months and years, its total daily transactions have remained fairly stagnant.

This is due to Ethereum’s well-documented scaling problems. By processing all computation on-chain, it has suffered constant issues with congestion and high network-use fees. Its developers have for years now been working on complicated new structures to scale while also keeping Ethereum’s existing applications running smoothly. This has so far resulted in long delays, complex protocol changes and new “layers” that users must actively follow, understand and implement to continue using, and ultimately a move to a proof-of-stake model that fundamentally changes Ethereum’s economic incentives and processing framework. The move to Proof of Stake comes at other costs, it clearly makes Ethereum an illegal unregistered security which should get the attention of regulators if they are not already looking at it after watching all those Vitalik Buterin pre-ICO fund raising videos circulating on social media. 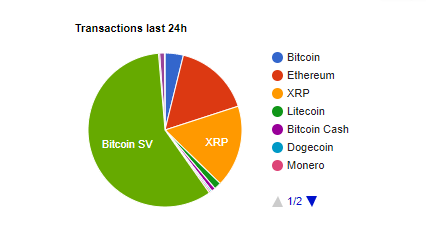 By far the lion’s share of BSV’s data and growth has come from the gaming world, also a growing market. It’s here that BSV and Ethereum compete head-on. Of note, CryptoFights has been at the forefront of gaming development on BSV. CryptoFights actually began life as an Ethereum project, before its developers shifted to BSV in 2019. They acknowledged the project would have become unfeasible on Ethereum due to scaling limits and impossibly high transaction fees. 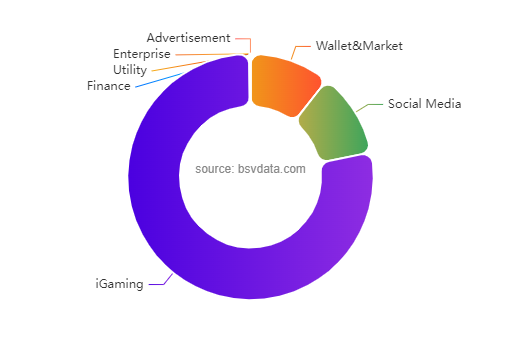 BSV has also kept average per-transaction fees low enough to use for high-volume data applications. They have consistently remained at a fraction of a U.S. cent per transaction, and even brief fee spikes have barely touched 3 or 4 cents mostly due to large images being uploaded directly on-chain because of the growing NFT market on BSV. This chart compares average daily fees on BSV, BTC and ETH—we know is really hard to see but BSV is the flat yellow line level with the graph’s base:

Other dissatisfied Ethereum developers have indicated they are already moving, or are interested in moving, their projects to the BSV blockchain rather than wrestle with Ethereum’s limits while facing its unproven changes.

While Ethereum and its “philosophical leader” Vitalik Buterin have won plenty of media attention over the years, it today remains a “hobby platform” that few enterprise or serious projects should risk using to run meaningful applications. Its reputation as a contract and token platform exists mainly thanks to longevity and hype marketing, which has fooled enough retail and less-knowledgeable investors to increase ETH’s market cap. Another factor driving up Ethereum market cap is billions of dollars small amounts of ETH stuck in wallets because they do not make economic sense to move because of the excessive gas fees. Buterin did a really bad job architecting Ethereum before it launched and has no chance of fixing his blockchain’s permanent problem. Hence the moniker “hobby platform” when referring to his failed invention.

Where blockchain should have been by now

As for BTC, it compares with neither BSV nor Ethereum as a serious contract and data-processing blockchain. The network is limited to around 4-5 transactions per second worldwide, often at exorbitant fees. The continued crippling of its capacity over the years in pursuit of “decentralization” have instead created a blockchain that exists only to pump the speculative value of its main asset to traders. BTC exists only today as static “digital gold” that could not replace the world’s daily-use currencies, despite being falsely touted by paid influencers on social media as the best-known alternative.

BSV scales unboundedly on-chain today, using the same rules Bitcoin launched with in 2009. It has proven what Bitcoin and blockchain can do, and has always been able to do. Rather than face this reality, its rivals like discredited Vitalik Butern have instead focused on character assassinations of Bitcoin creator Dr. Craig S. Wright, and unprovable accusations that BSV is somehow “a scam”.

Clarity?
1) In describing the $ETH ICO in 2014, @VitalikButerin insisted it would be “an opportunity for ANYONE to purchase ether” which he said was a “CURRENCY inside the Ethereum system sorta like the #XRP in @Ripple”… pic.twitter.com/zXO1TqrPU6

As a reminder, Buterin rattled his tin cup in various documented hyped-up roadshows begging investors to pony up money for his pet project, whereas Craig Wright has never asked anyone for a penny and earned his wealth by operating as an honest node competing against everyone else in the economic model he created as Bitcoin’s inventor.

BSV is Bitcoin and if BSV doesn’t work, Bitcoin itself doesn’t work. Yet it does. BSV’s huge growth in transaction numbers and data processing power over the past three years proves that. It also shows where the blockchain industry itself could have been by now, had people focused on technological development instead of greed and personal/power squabbles. Regardless of where BSV could have been by now, everyone in the ecosystem is happy to see where Bitcoin is headed in the future.