Binance and FTX appear to have gone to war with each other and users of the cryptocurrency exchanges—along with the reputation of the whole ‘crypto’ sector—are getting caught in the crossfire.

On Saturday, around 23 million FTT—FTX’s in-house token—worth nearly $600 million were transferred to Binance from a wallet that Binance founder Changpeng ‘CZ’ Zhao later confirmed was company-controlled. The transferred FTT represents nearly one-fifth of all FTT in circulation.

On Sunday, CZ tweeted that his exchange had “decided to liquidate any remaining FTT on our books.” Binance received around $2.1 billion worth of FTT and BUSD (Binance’s in-house stablecoin) in 2021 when Binance divested itself of its share in FTX. Binance was an early investor in FTX but the latter site’s boss Sam Bankman-Fried (SBF) reportedly grew antsy about their ties following a series of mainstream media profiles alleging patterns of rampant criminality by Binance and CZ.

As part of Binance’s exit from FTX equity last year, Binance received roughly $2.1 billion USD equivalent in cash (BUSD and FTT). Due to recent revelations that have came to light, we have decided to liquidate any remaining FTT on our books. 1/4

CZ claimed that the FTT sell-off was prompted by “recent revelations that have came [sic] to light,” a likely reference to last week’s report on the dominant role that FTT represents on the balance sheet of Alameda Research, the SBF-owned firm that serves as FTX’s primary market-maker. The report spawned numerous other articles questioning the solvency of both Alameda and FTX, all of which went unanswered by SBF’s normally chatty Twitter (NASDAQ: TWTR) account.

CZ claimed that the process of liquidating Binance’s FTT position could take “a few months” but the site would try to do the job “in a way that minimizes market impact.” This brought a reply from Alameda’s recently installed CEO Caroline Ellison, who said Alameda would “happily buy [all Binance’s FTT] from you today at $22!” (On Monday, CZ appeared to pour cold water on this proposal.)

Ellison also sought to downplay the significance of the original report that questioned Alameda’s apparent over-reliance on FTT. Ellison claimed that the balance sheet referenced in the report represented only “a subset of our corporate entities” and the firm had over $10 billion in assets “that aren’t reflected there.” However, the fact that Ellison’s clarification didn’t come until days after the report emerged—and only after CZ announced his sell-off—didn’t exactly imbue the market with confidence.

No make-up sex in CZ’s future

Despite CZ tweeting a seemingly damning analogy equating FTT with Terra Labs’ failed token LUNA—the collapse of which fueled the broader collapse of the crypto market this spring—CZ rejected “speculation” that the FTT fire-sale was “a move against a competitor.” But that’s not how the market is treating it.

Nor SBF, who finally responded to the situation on Monday, claiming that “a competitor is trying to go after us with false rumors. FTX is fine. Assets are fine.” FTX saw a sharp uptick in withdrawals of all manner of tokens since the controversy began but SBF insisted that his exchange has been “processing all withdrawals” and would continue to do so. SBF then aimed his comments at CZ, saying he’d “love it … if we could work together for the ecosystem.” 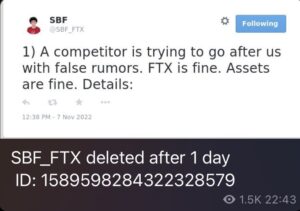 Keep in mind that the report that allegedly kicked off this controversy questioned the solvency of Alameda, not FTX. It seems the fig leaf of independence that masked the interconnected and incestuous nature of the two SBF-controlled firms is threatening to fall. In other words, brace yourselves, because we may be about to get a look at SBF’s junk—and it may not be pretty.

In the meantime, the ongoing controversy has understandably led to a tumble in the value of FTT, which currently sits around its low-water mark for the year. Whether or not there’s a direct correlation, most major ‘crypto’ tokens are also in negative territory over the past couple days, suggesting the in-fighting is creating unease among those who might otherwise have been content to continue HODLing through this extended crypto winter.

Speculation is also swirling that the FTT asset controversy was simply a convenient avenue of attack for CZ. Supposedly, the real casus belli was SBF’s recent publication of detailed proposals for policy makers to regulate all things ‘crypto,’ much of which was viewed as overly favorable to all things SBF and antagonistic toward SBF’s competitors.

Liquidating our FTT is just post-exit risk management, learning from LUNA. We gave support before, but we won't pretend to make love after divorce. We are not against anyone. But we won't support people who lobby against other industry players behind their backs. Onwards.

On Sunday, CZ appeared to allude to this controversy by stating that Binance “won’t support people who lobby against other industry players behind their backs.” CZ further alluded to harboring a grudge against SBF for being forced to sell his stake in FTX, claiming that “we won’t pretend to make love after divorce.”

Iran so far away

Naturally, there are still more theories for why CZ appears to have declared war against his rival. For instance, it could have been an attempt to distract attention from a damning Reuters report offering more details on earlier reports on Binance’s role in helping Iranian digital currency investors dodge U.S. economic sanctions.

Using data supplied by Chainalysis, Reuters reported that Binance processed nearly $8 billion worth of transactions linked to Iran’s largest exchange Nobitex, which offers its users tips on how to dodge the sanctions.

In response to Reuters’ original report, CZ claimed that Binance was compliant with international sanctions and that only seven Iranian users “got missed/found a workaround” and were later banned. But in the period after Binance reluctantly imposed proper know-your-customer (KYC) requirements on its customers in August 2021, Reuters claims that over $1 billion in transactions passed between Binance, Nobitex and other Iranian exchanges.

Nearly $3 billion of the total transactions studied were direct transfers between Binance and Iranian exchanges while the other $5 billion took a more “indirect” route through numerous intermediaries. This ‘layered’ strategy is what Nobitex proposed to its 4 million customers who wished to avoid being flagged by regulatory watchdogs. Binance was cited by Nobitex as presenting “fewer problems for Iranian users.”

It must be said that in addition to being, er, agnostic regarding regulatory compliance, Binance is the global leader in digital currency trading volume. So, its status as the go-to exchange for sanction-dodging Iranians is somewhat understandable. But the $8 billion in Iranian transactions Binance handled was 10x the volume handled by the next biggest exchange on Reuters’ list, the Seychelles-based Kucoin. This overwhelming preference for Binance suggests some greater appeal than merely a larger liquidity pool.

Tellingly, around three-quarter of the $8 billion in Iranian transactions handled by Binance involved the Tron token, which, while not officially a ‘privacy’ coin, does offer similarly anonymizing options. And Binance is the market-leader in Tron trading.

Everyone’s guilty, so no one’s to blame

In response to the Reuters report, Chagri Poyraz, Binance’s global risk and compliance chief, rushed out a blog post saying that it was early last week that the exchange “discovered that Binance interacted with certain Iran-based nexuses.” Given that Reuters (unsuccessfully) sought a detailed response from Binance before publishing its latest article, it seems logical to conclude that this ‘discovery’ came not from Binance’s internal systems but from nosy journalists asking questions.

Poyraz’s post offered up the usual half-baked homages to Binance’s alleged dedication to compliance—all of which were effectively forced on the company after dragging its heels forever and being caught in lies—while pinning the fault on one of its commercial partners. Specifically, “a lapse in vendor safeguards caused a potential nexus with entities in Iran.” But, stand-up guys that Binance are, Poyraz declared that “ultimately, mistakes our partners make are also our responsibility to fix.”

While “collaborating closely with the vendor to develop solutions that will strengthen systems and processes for this industry-wide issue,” Poyraz sought to share Binance’s guilt by saying “there’s not a single exchange out there that has completely figured this out.” Poyraz said he was “stretching out my hand to my peers in the rest of the ecosystem” to work together to help “uplift the blockchain industry.”

Poyraz’s touching appeal for unity may not save Binance from U.S. authorities, who were already seeking internal records that could determine whether the exchange violated the U.S. Bank Secrecy Act. The new revelations regarding Binance’s extensive dealings with Iranian customers may also spell trouble for Binance.US, the ostensibly arms-length U.S.-facing operation that Binance set up as a compliance lightning rod to draw authorities away from the Binance.com mothership.

Reuters quoted multiple lawyers and sanctions experts warning that Binance is in deep trouble if the U.S. authorities can identify a “nexus to the United States” involving sanctions violations. Reuters claims the data Chainalysis provided show at least $1.5 million worth of transactions flowing between Binance.US and Iranian exchanges Nobitex, Wallex and Tether Land.

Reuters stressed that it has as yet found no evidence that directly sanctioned Iranian individuals, companies or organizations used Binance or Binance.US. A Binance.US spokesperson told Reuters that the exchange “adheres to all applicable U.S. rules governing digital asset exchanges” and challenged Reuters’ financial stats by claiming that the volume of transactions cited in its report were inflated by lumping together “direct as well as indirect transactional data.”

Binance may insist that there’s nothing to see here but the feds likely don’t share this view. CZ seems to believe that because he’s gotten away with so much so far, his luck will continue to hold in perpetuity. That would be a bad bet at the best of times but, should SBF go down in flames because CZ caused a run on FTX’s underfunded bank, we should expect SBF to share secrets learned while he and CZ were still tight. CZ may not be interested in make-up sex, but SBF may feel justified in f**king CZ on his way out.

Follow CoinGeek’s Crypto Crime Cartel series, which delves into the stream of groups— from BitMEX to Binance, Bitcoin.com, Blockstream, ShapeShift, Coinbase, Ripple,
Ethereum, FTX and Tether—who have co-opted the digital asset revolution and turned the industry into a minefield for naïve (and even experienced) players in the market.