Happy Genesis Block Day! January 3 is the 14th anniversary of Bitcoin’s Block Zero, its anchor in time. That time, in 2009, was one of economic turmoil—and the aftershocks from that turmoil are still rocking our world in 2023.

But first, a reminder of how the “Genesis Block,” as Block 0 has come to be known, is not like other Bitcoin blocks.

Firstly, the Genesis Block was never “mined” like every other Bitcoin block. That started with Block #1 when Satoshi Nakamoto released the software on SourceForge. The hash from Block #0 was done with different software and hard-coded into the original Bitcoin protocol.

As the man behind the “Satoshi Nakamoto” name, Dr. Craig S. Wright, tells it, Block #1 was mined six days after the Genesis Block. The Bitcoin software “fell over” after machines on Dr. Wright’s rural server farm patched and rebooted, requiring a trip to the farm and urgent reconfiguration before the network could begin its 14-year (so far) journey for real.

“The network forked and split, and it was a big mess to say the least,” Dr. Wright wrote.

Whenever someone on Twitter asks, “why doesn’t Craig Wright spend Bitcoins from the Genesis Block?” it’s a sign that person knows nothing about Bitcoin. It’s impossible for anyone to “spend” those coins.

“I always find it strange to see how people react as if 50 bitcoin in the genesis block mattered,” Dr. Wright wrote in 2019.

“The so-called lost bitcoin from the genesis block do not exist as spendable bitcoin; it is an anchor. The problem people have when they look through glasses tainted with greed is that they don’t see the simple facts, but rather paint the scenario with one of their desire. The first thing to remember is that there were no bitcoin sales in January 2009. Bitcoin was a system that cost money to run and create, and yet had no value. When asked about the lost value of the genesis block, the calculation is simple: 50 bitcoin times zero.”

Chancellor is still on the brink

“Chancellor on brink of second bailout for banks” was the Times headline. Satoshi hid in the first block’s coinbase hash as a timestamp to prove there had been no mining on the Bitcoin network before he released the software to the public.

“The Chancellor will decide within weeks whether to pump billions more into the economy,” the original article in the Times said. In 2009 these seemed like desperate measures, and they were. Since 2009, though, governments across the Western world have indeed pumped billions, even trillions more, into their economies. Satoshi was making a statement on irresponsible government interventions in the economy and their eventual erosion on markets. 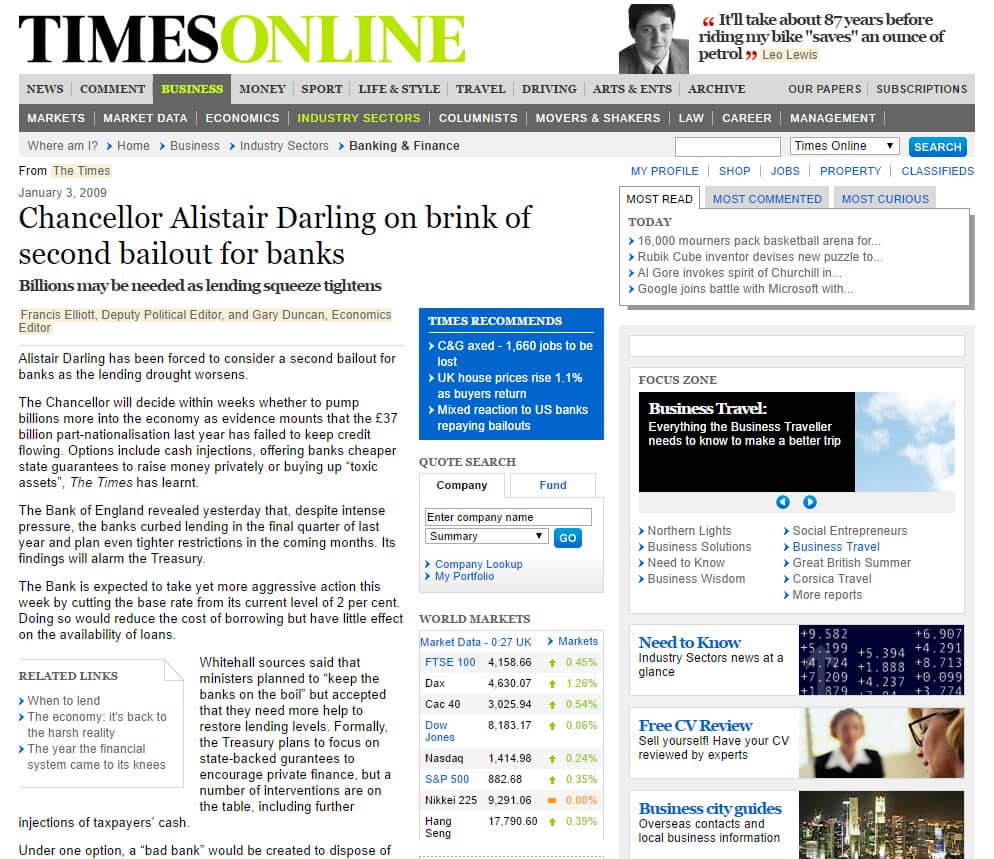 “They actively sought to incentivise bad behaviour and push in typical Keynesian style the problem down the road. It would be a bigger problem, but it would be someone else’s problem.”

Well, now it’s 2023, and it has indeed become someone else’s problem: Ours. Western economies are currently struggling with high inflation, unemployment, and even food and energy shortages as they lurch from one crisis to another.

To give some idea of the tumultuous economic times we live in: The U.K.’s Chancellor of the Exchequer at the time of the Genesis Block was Alistair Darling, who held the office for just short of three years. In the decade following Darling’s tenure, three other men held the job. However, in 2022 alone, there were four different Chancellors—and three of those were in the second half of the year.

If Satoshi’s hidden message in the Genesis Block was a call for less intervention and more honesty in the monetary system, we’re sorry to say that only Bitcoin still stands as a representation of that honesty.

Even Bitcoin became corrupted in the years following 2009, with BTC and the Core developers (along with most exchanges) still “passing off” BTC as the real Bitcoin. It’s not. And despite years of thefts and scams in the digital asset world, proponents still argue a form of the old “code is law” cliche.

Satoshi Nakamoto, a.k.a. Craig Wright, is still battling that corruption today. Only BSV still follows the original Bitcoin protocol rules as they existed in 2009, and hopefully, someday, the wider world will recognize it as such. Code-law is increasingly taking a back seat to human law also, and Dr. Wright is currently arguing in the courts to implement proper procedures (in both code and law) for asset recovery.

His success there would offer Bitcoiners protection against large-scale scams and thefts, at least. If you can prove you own the coins to a judge, they could and should be yours again, no matter who holds the keys.

Just like the economy at large, Bitcoin is a long-term struggle against the worse aspects of human nature. In 14 years, it hasn’t eliminated dishonesty and bad decisions, and it probably won’t—but it does offer the world a better alternative to the systems we currently have.

Despite not being licensed or registered by the central bank of the Philippines, Binance is still offering “crypto-to-fiat” services and organizing meetups, Infrawatch wrote in a letter to lawmakers.

The three entities blacklisted by the regulator include Meta Capitals Limited, Cresttrademining Limited, and Forex Market Trade which the regulator says are engaged in pig-butchering scams.

Coinstore.com was founded in 2020 by professionals from some leading digital currency exchanges; it has over 180 employees worldwide and over 1.8 million registered customers in 175 countries.