The post originally appeared on the Unbounded Capital website and we republished with permission from its author, Jack Laskey.

The Business of Bitcoin is a weekly series covering topics including Bitcoin landscape analysis, Bitcoin adoption strategy, industry-specific Bitcoin integration analysis, and challenges facing Bitcoin entrepreneurs. In this series, Bitcoin refers to Bitcoin Satoshi Vision, the version of Bitcoin which is closest to the original design of Bitcoin described in the 2008 whitepaper. BSV refers to Bitcoin’s native token which trades on exchanges as BSV.

Two oft-cited subjects in the world of tech business are Metcalfe’s law and the chicken and egg problem. Put together, it is easy to see why a technology like Bitcoin can have so much potential and so little adoption.

Made widely known by George Gilder, Metcalfe’s law is the idea that the total effect of a communications network is proportional to the square of its connected devices. This has been transformed in the digital currency world to mean that the value of a digital currency is proportional to the square of its users. Whether or not this extrapolation is appropriate, the intuition that Bitcoin becomes more valuable as more people use it holds up to scrutiny when examining the purported benefits. What is a cheap payment worth if one has to pay a conversion fee? What good is data interoperability if there is no one to interoperate with? If Bitcoin fixes the sinking ship of modern computer security, what good is plugging the first hole relative to the last? Bitcoin’s main value propositions are all amplified by the size of the network, and are diminished when that network has not yet formed. Similarly, the chicken and egg problem is the canonical business obstacle when the development of a network of users is necessary for a business to generate value. What good is Uber to a driver if there are no customers and vice versa? What good is accepting Bitcoin as a merchant if there are no consumers who use it and vice versa?

It doesn’t take a genius to have come to the conclusion that Bitcoin is suffering from a chicken and egg problem. What Bitcoin has demonstrated very well to this point is that one cannot necessarily speculate themselves out of such a problem. In fact, one might say that projects like BTC have proven without a doubt that speculation can create a vast amount of wealth without creating a similarly large network of users. Some would point out that flaws with BTC precluded the possibility of a large network of users forming as a result of the speculative frenzy that occurred over the 2010s. While that is likely true, there are still good reasons to believe that Bitcoin adoption may have been thwarted by the very same chicken and egg problem. Consider, for example, that BCH had much greater capacity to allow a large network to form but was unable to generate a significant network of users.

Adoption of technologies often follows an S-Curve, flat at the bottom, steep in the middle, and flat again on top. 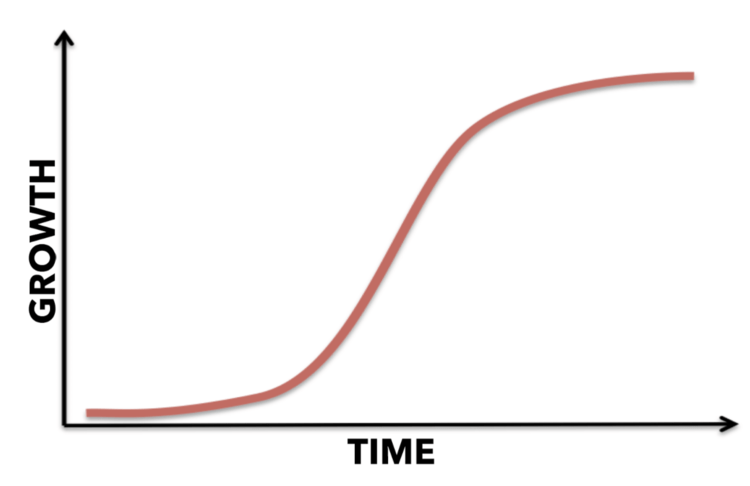 This follows logically from Metcalfe’s law since each subsequent adopter receives greater value due to the larger network. Thus adoption accelerates until the shrinking number of non-adopters limits the potential growth. However, this does not make accelerated growth an inevitability where a slow process will eventually accelerate and reach global adoption. When a network isn’t useful, adoptees can leave making the value less to the next adopter. In other words, stagnation can lead to things fizzling out.

So can Bitcoin achieve widespread adoption growing incrementally by individual users? History to this point would suggest no. The chicken and egg problem describes much of the issue, but further complicating matters are the incentives of businesses building on Bitcoin today. Because the problem of driving early adoption is so difficult and the rewards of creating valuable tools for a scaled Bitcoin is so high, the incentive for businesses is to build for scale and let others handle the challenge of adoption. These businesses are a net benefit to adoption, but they aren’t created to drive adoption directly. Up to this point, they have primarily helped drive developer adoption leading to more projects without more users. Of course, some businesses on Bitcoin, Twetch being a standout, have achieved a level of adoption from casual users. While commendable and a great example of how Bitcoin can be used, Twetch’s standout status is more damning of overall adoption levels than indicative that the status quo methods can lead to broad adoption.

With the realities of Bitcoin’s adoption failures, Metcalfe’s law and the resulting chicken and egg problem, the best way to kick off Bitcoin’s adoption appears to be attracting enterprise usage. Enterprises are known for having a lot of customers. If an enterprise adopts Bitcoin in a way that results in many or all of their customers also adopting Bitcoin, this can create a sizable network. Imagine, for example, that Facebook gave each of its customers a Bitcoin wallet, maybe prefunded with $5 of BSV or some other tokenized currency. Suddenly, billions of people have Bitcoin and other Bitcoin businesses see their customer acquisition costs plummet. In a swift move, the network moves from the flat front-end of the S-curve to accelerating growth. While this example may be overly optimistic, it demonstrates the potential for an enterprise to dramatically increase the network value of Bitcoin with unilateral action. The unilateral action is the key quality, since it solves a difficult coordination problem of creating a network of individuals where each of those individuals has little incentive to join in isolation.

Bitcoin is and isn’t one network

A company like Facebook issuing prefunded Bitcoin wallets is a form of enterprise adoption that would greatly increase the value of BSV. But, what if these wallets were issued with a stablecoin instead? That form of adoption would still likely be a long-term boon to BSV value, but the type of network that forms around this action is very different. For example, many merchants would likely accept this stable coin and not BSV, particularly if BSV conversion fees and volatility were still significant.

Similarly, consider a case like EHR Data, an enterprise currently building a prescription tracking solution on Bitcoin. The network they will form isn’t one that directly leads to merchants accepting BSV, for example. What this network would do is to incentivize other health care data to make use of the Bitcoin ledger.

Bitcoin’s flexibility and utility is such that many networks will form in parallel with their own adoption curves, network effects, and chicken-egg problems. The degree to which each of these networks bolsters the value of the other networks varies. The unifying factor is the effect each of these networks have on services supporting the whole network with mining being at the center of these services.

Thanks to the vision of scale and potential shared among those working on Bitcoin, services that make the use of Bitcoin possible have scaled well above the actual demand. While extreme outlier moments have stressed these systems as currently configured, most of the services currently operating on Bitcoin could handle an order of magnitude greater scale, possible two in some cases.

While this excess capacity and continued growth is economically incentivized by these businesses’ expectations of the future, the lack of usage today is almost certainly retarding the immediate progress of these businesses. It is both economically rational and likely inevitable that the tangibility of revenue today is a more salient motivator than the promise of revenue in the future. Further, if more revenue was available, there would likely be more competitors seeking to provide Bitcoin infrastructure and services. In other words, even though we are seeing capacity grow, higher usage would see capacity grow faster.

Accelerating the progress of services like mining, data indexing and service, and wallet provision is the universal benefit of enterprise adoption and what unifies the disparate networks of Bitcoin into one network that benefits from all other participants. EHR Data adoption helps Twetch adoption and vice versa. This is the beauty of Bitcoin.

Bitcoin Satoshi Vision has most publicly been defined as the enterprise blockchain. The major propagators of this branding are nChain, Bitcoin Association, and CoinGeek. At Unbounded Capital, we think their leadership in this regard is prescient and needed. We have our own initiatives in the works to further these ends beyond our advocacy for and investment in Bitcoin and Bitcoin start-ups. However, enterprise adoption today is more meme than reality. There are few if any “enterprise-grade” services ready. Traction has begun, but only in the planning stages. No large enterprises are actively using Bitcoin.

In our view, the mission of Bitcoin adoption is both a necessity and an enormous opportunity. Because of Metcalfe’s law and the chicken and egg problem, we think enterprise adoption will lead the way towards this goal. Identifying and developing solutions for the early enterprise adopters of Bitcoin is the challenge most likely to reap early outsized returns. If Bitcoin is as useful as many say, then the competition from incumbents will be fierce. Today, the landscape is wide open, for entrepreneurs, developers, and consultants. Tomorrow, the likes of FAMGA and the Big Four will be competing for enterprise business on Bitcoin. For anyone who has cultivated an understanding of Bitcoin, the time to act is now. If you want enterprise customers tomorrow, get them today. At Unbounded Capital, we are passionate about the challenge of driving enterprise adoption. If you share our passion, we want to talk with you. Achieving this goal won’t be simple, but we are committed to supporting the entrepreneurs, developers, and consultants working towards these ends until we see both Bitcoin and Bitcoin native businesses widely adopted.