Home » Editorial » Where do blockchain and ‘crypto’ go from here?

Since Sam Bankman-Fried’s FTX and Alameda went bust, digital assets prices are down roughly 20% across the board. This has caused many investors, bankers, financiers, observers, journalists, and blockchain enthusiasts to conclude that the industry’s reputation has taken a hit that will be difficult to recover from. 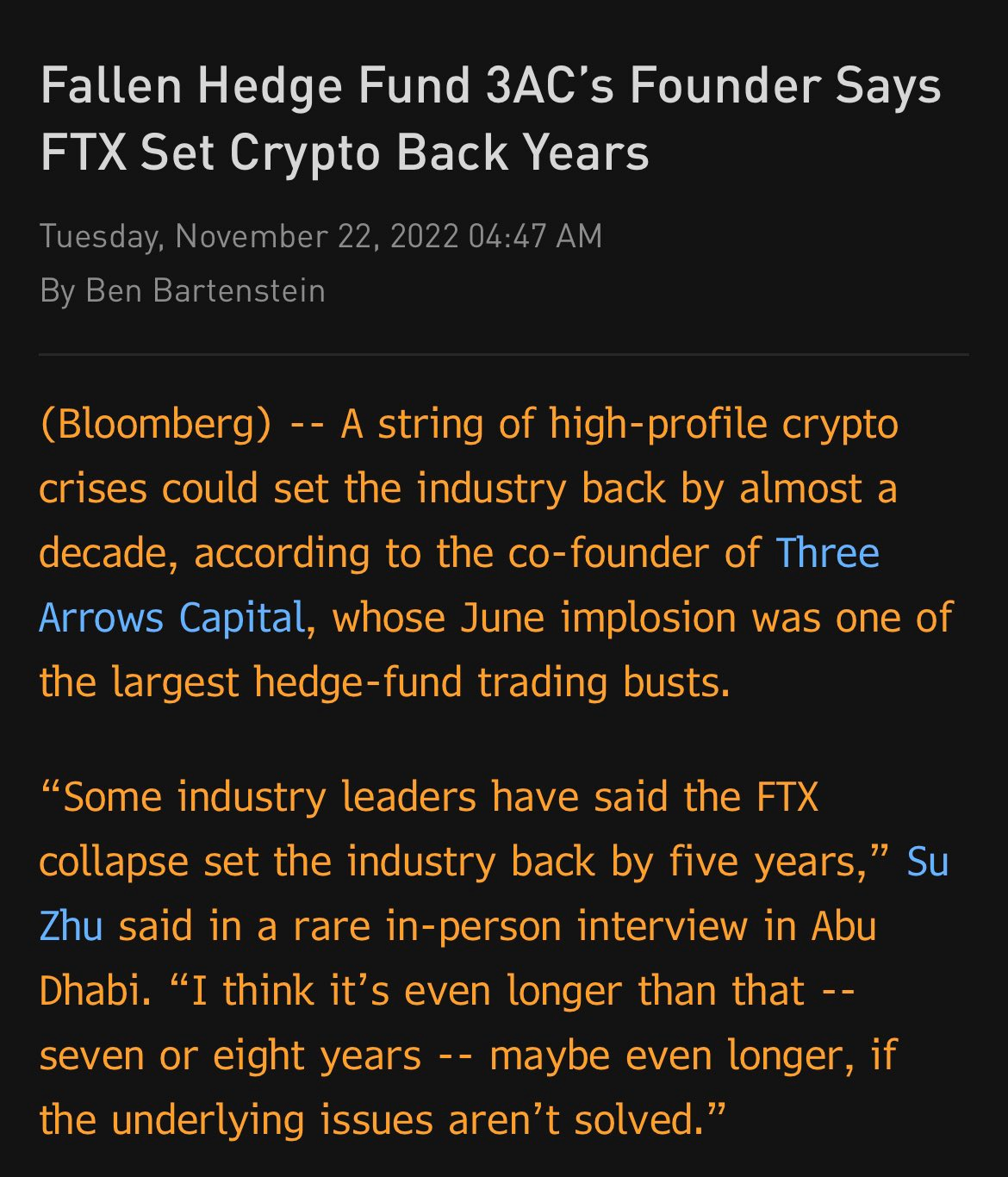 In many instances, this is true. There is a lot of negative sentiment around digital currencies and a few blockchains, in particular, thanks to the FTX fiasco that revealed that many crypto-companies had bad accounting practices, perpetuated Ponzi schemes and were effectively just a house of cards that was one bank run or market drawdown away from insolvency.

However, I don’t believe the events that took place in November are entirely bad; I even think that some of the events will have positive externalities that end up putting wind in the sails of the honest actors in the space.

This is because the industry is basically back to square one. Market participants have lost trust in the business models of the past that were supposed to be trustworthy or safe. In my opinion, the blockchain industry is now working with a blank slate. Participants are aware that some of the most popular business models do not work, which means that companies within the space are going to have to change their approach if they want to obtain users and investors who trust them and their products. But what will that look like? Here are a few of my thoughts on what we will see and how long it will take to see it unfold.

Death of the centralized exchange

The unfortunate result of this is that if an entity is insolvent, its users typically don’t get their money back because the entity has spent all of that user’s money. If the entity files for bankruptcy and it goes to the legal system (court) to be resolved, the users of the entity are typically at the very bottom of the list of creditors, meaning that if some money is salvaged from the insolvent entity, the centralized entity’s users will be the very last ones to get a payout, and that’s contingent on the idea that there will be any money left after the creditors at the top of the list get paid out.

The rise of self-custody and DEX

So what do market participants do if they want to continue trading and using blockchain-based products, but they don’t trust centralized entities and, therefore, won’t buy digital assets through them or use centralized wallets (hot wallets)? They turn to self-custody solutions and decentralized exchanges.

The rise of self-custody solutions and decentralized exchanges is a knock-on effect that comes from the fall of centralized entities. Self-custody means that you keep your coins/tokens/digital assets offline (cold storage) in a wallet to which only you own the private keys and, therefore, only you have access.

In other words, on a decentralized exchange, there is no risk of an entity being irresponsible with the user’s money and using it to fund its activities. However, there is the risk of a smart contract being exploited, which results in the liquidity pool being drained. But even in this instance, only liquidity providers are affected. The exploit does not affect the users who only connect their self-custody wallet to the decentralized exchange for a short period of time to execute a trade.

Self-custody and decentralized exchanges are on the rise because both are products that do not require the same degree of trust as a centralized service provider, which means users are less likely to get the short end of the stick if an adverse event occurs.

The demise of coins, tokens, and tokenomics

Recent events have shown that business models that use coin and token-related models as the engine of their business are extremely unstable. They are always one decline in price, one exchange delisting, or in the case of FTX, one business leader making a negative statement away from leading to the collapse of the entire business.

This month, we learned that many well-known crypto-firms collateralize their loans with digital currencies. But when their digital currency collateral rapidly loses value, they can no longer repay their loans, opening up a can of worms that leads to financial trouble and potential insolvency.

Some coin and token models are just fundamentally flawed. For instance, Terra’s UST stablecoin collapsed when users unstaked the token and sold the token, which led to its de-pegging from the dollar and initiated a death spiral that dragged the digital currencies price close to zero and caused the crypto firm with a significant amount of it on its balance sheet, Three Arrows Capital (3AC), to go bust.

Less sophisticated coin and token models resemble Ponzi Schemes. They create no real value or utility in the world but instead rely on the greater fool theory for the coin or token to increase in price.

If you joined the blockchain or digital asset space before 2021, you have most likely seen every iteration of the coin and token models described above. Before 2022, you may have even made a significant amount of money on these coins and tokens if you were able to sell them before the digital currency market crashed. Still, if you didn’t sell, you are most likely holding a bag of coins or tokens that will not amount to anything in the future because the companies that created them do not create value, solve problems, increase efficiency, and reduce costs in the world.

A return to fundamentals

Crypto firms such as 3AC, FTX, and BlockFi being insolvent and filing for bankruptcy has caused market participants and those thinking of entering the market for blockchain-based digital assets to scrutinize the industry’s companies, practices, leaders, and business models.

This will catalyze a return to fundamentals from narrative-based investing. In the past few years, while the digital currency market was in a bull market, it didn’t really matter what you invested in. You most likely would have made money as long as you sold before 2021.

But those days are over, and the bull run is no more. At this point in time, there needs to be an actual value proposition for a company to be considered a good investment, and even then, you still need to do your due diligence on the company before you invest. Proper due diligence could have prevented many investors from giving Sam Bankman-fried money for FTX, but because it was a bull market and the number go up narrative was so strong, they blindly gave him the money they most likely won’t be getting back.

For profitable innovation and inventing to pick back up, businesses and engineers are going to have to take a new approach when it comes to the blockchain and digital asset space. The models of the past will not work in the future now that most people know how fragile those models are under the hood. The next crop of blockchain-based projects will have to take a much different approach to succeed.

In my opinion, that approach looks like the company eliminating coins and tokens from their business model and abstracting away the blockchain-based elements from a UI/UX perspective so that the user of the app or service will not even know they are using a blockchain. On the backend, a blockchain protocol will be in place to record and transfer data for increases in efficiency and reductions in cost. These solutions will be created by companies that are solving real problems in the world/various industries rather than companies that are focused on creating digital currency products for users because the latter is much too small in the context of the global economy.

Lastly, it is going to take time for the blockchain and digital currency market to recover, one bad apple really can spoil the bunch, but the way to bounce back quickly is to create businesses with working prototypes that can be beta tested and piloted by companies within their respective industries, that experience gains in efficiency and reductions in cost thanks to the blockchain-based solution, this will begin to restore confidence in the blockchain industry as a whole.