Browsing Twetch, as I do every day, something unique caught my eye.

There are a few things buried in that hash worth noting. Seven inputs, three outputs and a change address. 0.00010459 BSV delegated by the wallet to pay Twetch, some other accounting on the global ledger, and a couple of fascinating things in the OP_RETURN.

And when decoded, the hash illuminates this beautiful piece of art:

The painting itself has so much going on, so I zoomed in and stared at it for about ten minutes to absorb the nuances. As I stared, I became overwhelmed with the religious and secular symbolism. The costly signals of the peacock feathers and the deer antlers are common tropes, and the frog is the unofficial symbol of the big blocker’s most important social network, but they all meant something more this time.

In the painting, a fat man climbs the ladder and cuts the rungs on his way up. As fiat currency is imprinted upon rolls of toilet paper and distributed by sports car-driving playboys, his scraps fall to emaciated beggars stuck in the dark. One of them appears to be on their knees begging in prayer for some relief. The red hand of (presumably) the Devil distributes debased coins amid the greenery of the top of the world. Poor souls march in the dark underworld beneath the surveillance of an obese man who looms over an executioner armed with a pistol. The right side of the painting is a vision of a hierarchical hell, where the only light shines from the red hand of Apollyon.

On the left, in golden light, a distraught man distributes bitcoins while the animals of costly signals watch over him in approval and the frog leaps after the bitcoins which fall from the Creator. There is a sliver of hope that shines brightly in this work of art, and that hope is most certainly bitcoin.

It is gorgeous and tragic—and it was for sale! In what could be a first, the art was uploaded to and showcased on Bitcoin via Twetch. After it was advertised, it was bid upon, and after being bought using the “/pay” feature, the painting became the property of the most enigmatic co-founder of the on-chain social network. Twetch user number “u/2” simply called by the name “A” bought the painting on chain with this hash for 20 BSV.

The people of Twetch took notice, and the transaction was liked and branched over 40 times on the social network. The official account even called out the large transaction: 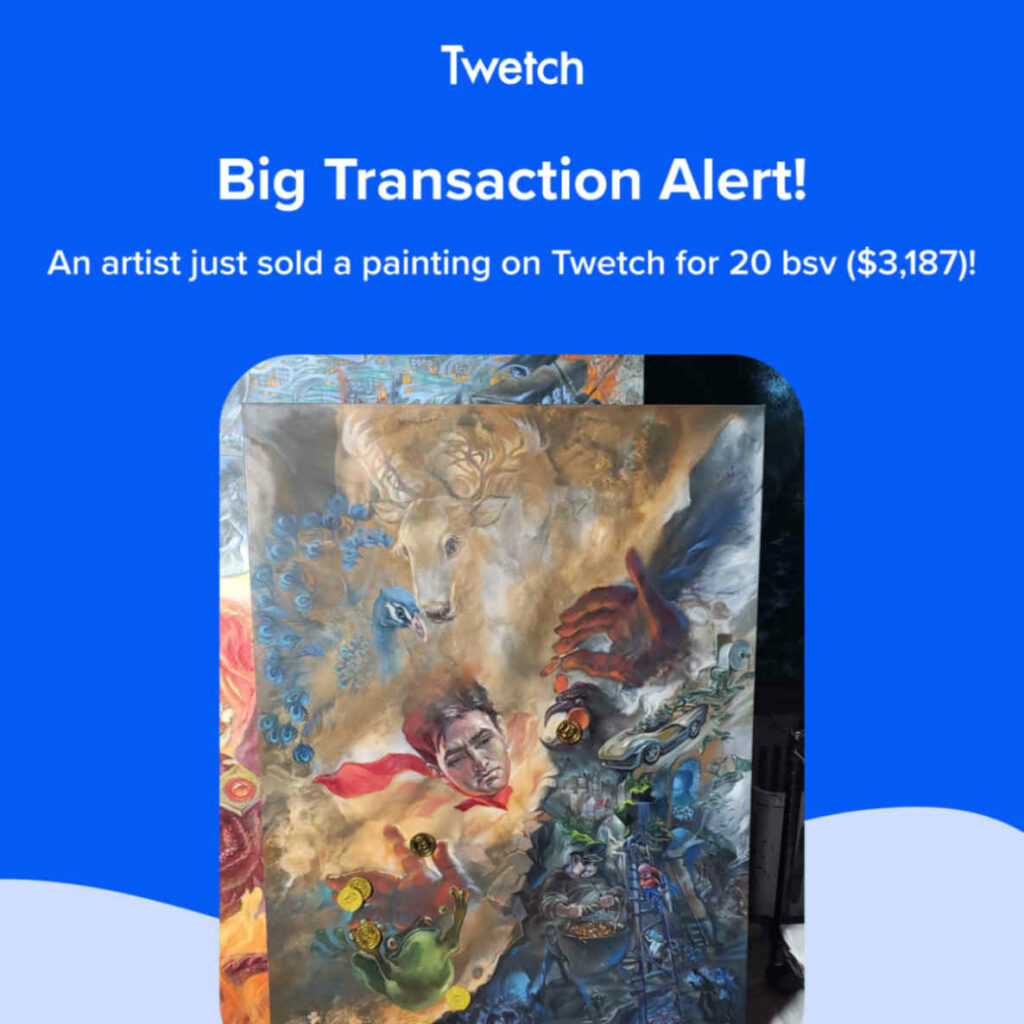 So now, the painting will have a new home, likely on a wall within the inner sanctum of “A,” while the symbolism challenges and inspires him to make Bitcoin better by making Twetch better. All the while, the money printers hum as u/2’s transaction hashes accumulate proof of work into eternity on the global ledger of truth and light: Bitcoin SV.

At present people see NFTs as static images, art, etc., or representing a plot of land, but the terminology and structures will change and improve over time, including interoperability across blockchains.