This is an excerpt from Dave Mullen-Muhr’s latest blog post on the Unbounded Capital website. Read the full piece here.

Bitcoin history is rife with flawed assumptions and downstream consequences of “improvements.” The consensus view of Bitcoin, one propagated by virtually all the experts, is that Bitcoin is amazing as a decentralized store of value. They claim that one of its main problems, unfortunately, is that Bitcoin is so damn inefficient. But worry not, the experts have been making improvements to remedy this and accentuate Bitcoin’s value as a decentralized store of value for nearly a decade.

In reality, Bitcoin is not only not inefficient, it is purpose-built to be THE MOST efficient ledger and transaction processing network in the world. The reason BTC, the most popular version of Bitcoin, is actually inefficient today, is because of implementation decisions made based on the incorrect assumption about its value proposition. It made sense to put trucks in the living room when the Smith’s misunderstood its purpose. Because everyone has their truck in their living room, it is in fact a terrible transportation tech. It’s stuck. BTC, in pursuit of the flawed decentralized store of value use case, obliterated its efficiency and now points to its inefficiency as its main flaw. When understood in this context the whole thing is silly.

What about Charles? Where is he in the Bitcoin story? The Bitcoin SV (BSV) implementation of Bitcoin is Bitcoin’s Charles. If you are unfamiliar, give it a google. If you do, you’ll quickly see that, just like Charles, BSV is largely dismissed as silly. Despite this dismissal, today, BSV is driving circles around the front yard. It’s regularly doing millions of hyper efficient transactions per day, sometimes constituting 90%+ of all blockchain transactions across all chains and all for a tiny fraction of the cost (at times hundreds of thousands of times cheaper per transaction).

Today, the digital currency and blockchain industry is dominated by Derricks: people who fancy themselves as experts who have the market validation of recently earned riches to validate this belief. When you show the blockchain-Derrick’s the above transaction charts they scoff. They think it’s silly that someone would even point to it as a demonstration of BSV’s value. Sure, maybe BSV is doing a lot of transactions for extremely low fees (~$0.00005), but in the process they missed the entire point of blockchain as being a decentralized store of value. I may be witnessing the truck driving circles in front of me, but it has been rendered a useless piece of living room furniture in the process. If you want a centralized database just use AWS? Online payments? Just use Venmo. Personal truck? Just take the train!

Today, BSV is emerging from this cloud of confusion. The blockchain industry is simply mistaken. The thought leaders are wrong. Bitcoin SV is pushing forward in demonstrating what Bitcoin as a scalable blockchain really can do when used properly, and the Derrick’s of the blockchain industry are beginning to look more and more silly to fresh eyes taking a look at the two visions for Bitcoin. The power of the technology that is being built leveraging BSV is becoming undeniable. A hyper efficient blockchain which can process the most efficient transactions ever and deliver a micropayment system for the internet as a peer-to-peer electronic cash system is far too valuable to overlook. Visa and Mastercard are nice services which have served the world well, but they have major shortcomings and innovation-stifling fees.

A native micropayment protocol for the internet is beyond a 1000x improvement. And the downstream consequences of a micropayment solution like this is enormous. It is not hyperbolic to suggest that the move from horses to cars is less of an upgrade than the move from Visa to Bitcoin when properly implemented.

People pursuing decentralized stores of value or other blockchain use cases downstream from the industry’s flawed assumptions can coexist with Bitcoin unleashed but it would be ludicrous to ignore the much bigger opportunity in front of developers, entrepreneurs, and investors. Right now, people who own trucks have them in their living rooms. Their blockchain/digital currency projects are so limited. If you like your truck-couch you can keep your truck-couch. But get ready for real trucks, unleashed. Get ready for cars, semis, roads, highways, and interstates. Get ready for industrial delivery, supercharged supply chains, rideshare applications, urbanization and the long tail of century-defining applications and consequences downstream from this invention’s proliferation.

At Unbounded Capital we are confident in our contrarian position. We are experiencing the value. It’s real and it’s here today. How could you convince Charles that trucks are not valuable when he is actively driving it around his yard? It’s true that the BSV ecosystem has a lot of work ahead of it. Charles’ car prototype needs roads. This is our opportunity. At Unbounded Capital we are busy investing in the companies which are building out the infrastructure to deliver on the full potential of this innovation. The future of Bitcoin (BSV) is much brighter than its short history to date. If you think you know what Bitcoin and blockchain can do, think again. This will change everything! 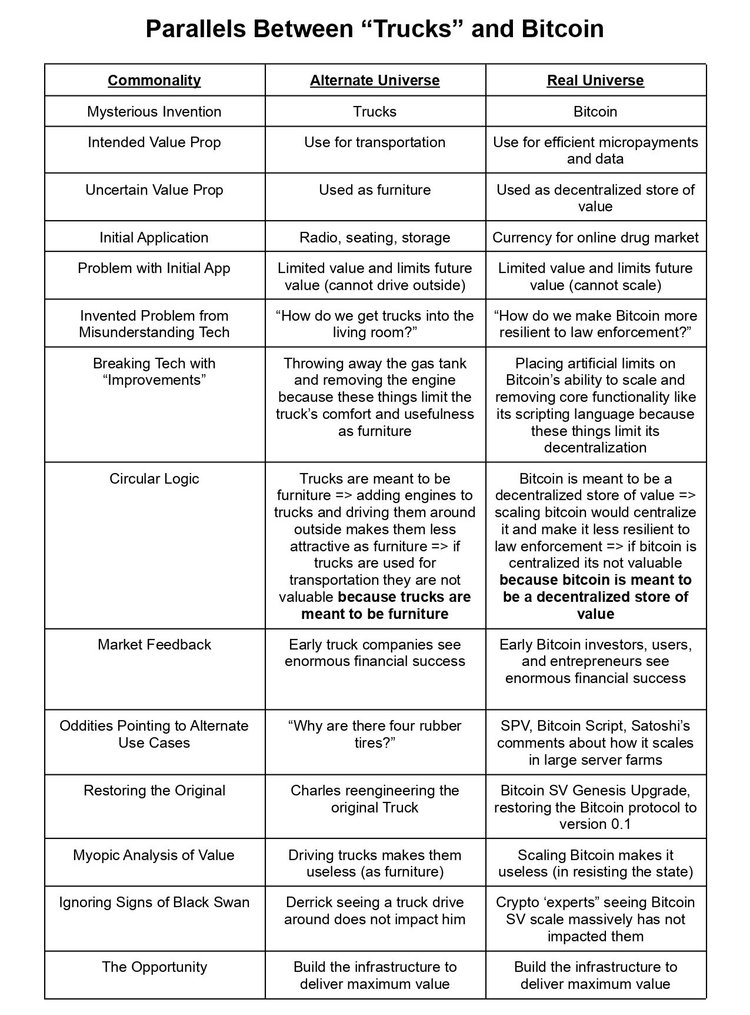 To read the rest of Dave Mullen-Muhr’s piece on the parallels between “trucks” and Bitcoin, head over to the Unbounded Capital website.