Home » Tech » Tokenized demo: Managing everything important in one place

“Commerce in general is based on contracts… everything is based in contracts,” said Tokenized CEO James Belding. Presenting an online demonstration of his company’s first application which is due for release in November, Belding stressed how beneficial it will be when people are able to manage everything important in their lives on one interface.

The presentation was part of the Bitcoin Association‘s ongoing series of webinars where those building on the Bitcoin BSV blockchain showcase their work. Belding’s presentation was an expanded version of the one he gave at the recently held CoinGeek Live, giving participants a more in-depth look at the whats and whys of Tokenized’s work.

It’s all about keeping track

Tokens are both exciting for what can be accomplished with them, yet mundane because their benefit lies in recording everyday activities where organizing and keeping track is the most important part.

Tokenization means keeping those records in one place. A place where they’re easily accessible and simple to monitor, whether you’re an individual, company, organization, or any other record-keeping entity. Imagine if you had one application that kept track of your money, investments, employment arrangements, shares, non-financial assets, tickets, vehicle records, insurance, loyalty points and coupons… anything that matters and on every level of importance, really.

As Belding explained, an original vision for PayPal was to be one platform for your entire financial life, consolidating accounts and balances, paying and receiving in any currency, and keeping track of everything in one interface.

PayPal does do some of this on a rudimentary level, but achieving the full vision of keeping all important records in one application wasn’t possible before Bitcoin and its tokenization features. “Now that future is in sight,” Belding said, adding that it’s “very much a long term vision, with stepping stones along the way.”

Tokenized isn’t just for consumers—it manages every aspect of a blockchain token’s existence, from creation by its issuer to the rules it follows, who and what may alter its status, who owns it, and what level of control they have.

That’s why it’s worth thinking about “contracts” in the context of tokens, Belding said. Everything is a contract, even the physical cash in your pocket. You have to consider what the contract represents, what an “asset” is, who is responsible and in control, rules and limits, authorizations and approvals, and so on. All these rules can be codified on a contract and tokenization allows them to be monitored and audited in one place.

Clarifying definitions of what tokens are and what they represent is an important step to “lowering the cognitive overhead” for all users. “You cannot build a financial system around a lack of clarity” or have any ambiguity, he added.

Many of the “contracts” we encounter in our lives are non-standardized, on paper documents (where they’re seen at all) and are often difficult to store and keep track of. They don’t automatically notify you if an event occurs or an action is required.

The Tokenized app interface (which Belding noted was inspired by workplace apps like Slack) has headings for Balances, Activity, Treasury, Contracts, and Relationships. It also has the ability to send and receive any kind of asset, and perform atomic swaps that allow a sender to send one kind of token while the receiver gets another. For a business or token issuer, it also keeps track of job responsibilities and levels of authority—with any individual/entity having a set of keys tied to on-chain actions.

Belding’s demonstration used simple coupons and giveaways a company might issue as part of a promotion. The issuer can set the name, type, duration/expiry, governing law and jurisdiction, face value, quantity, and transfer policy. There are also other variables particular to the token, and “oracles”—external entities permitted to affect the token’s status, which could be anything from the date to whether a certain action or event has occurred.

All important and meaningful business events are recorded on-chain as Bitcoin transactions, timestamping them so information on when, how, and by whom any change happened.

Know Your Customer and identity data is built into the system. Signatories can approve actions with a mobile authenticator app. Tokenized uses Paymail for access (the company deliberately avoids the term “account”) and there’s a notification/messaging function to keep track of what’s happening.

Belding sent a few tokens (which included an atomic swap for other tokens) as part of the demonstration, noting that it was a real Bitcoin transaction which could be verified on-chain. 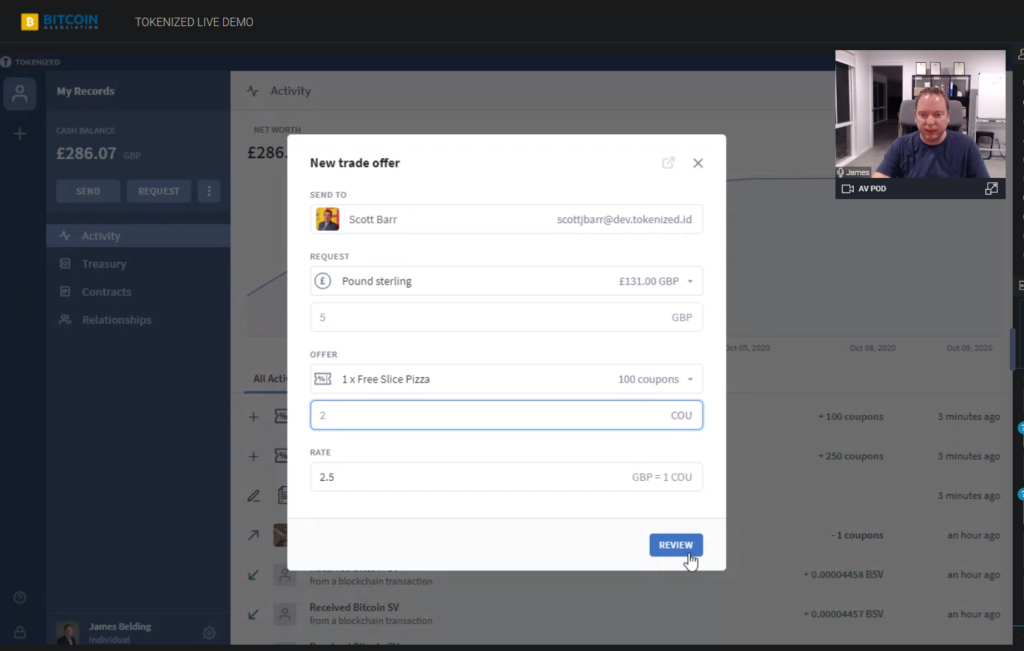 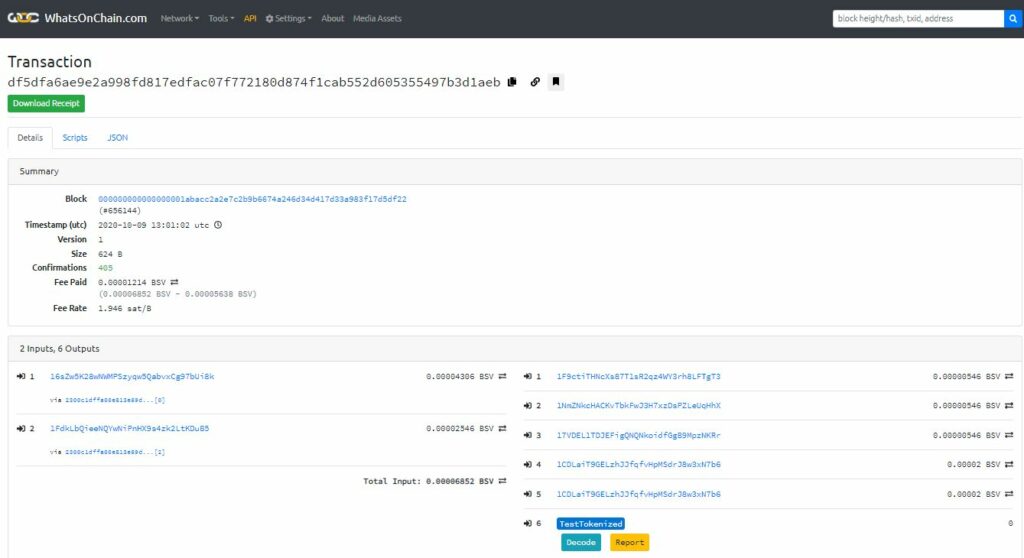 Asked what Tokenized’s business model is, Belding responded that in part it involves charging for access to its APIs—removing the need for users to worry about UTXOs or other complexities, and allowing users (in this case, businesses) to simply integrate their front-ends with Tokenized’s system. 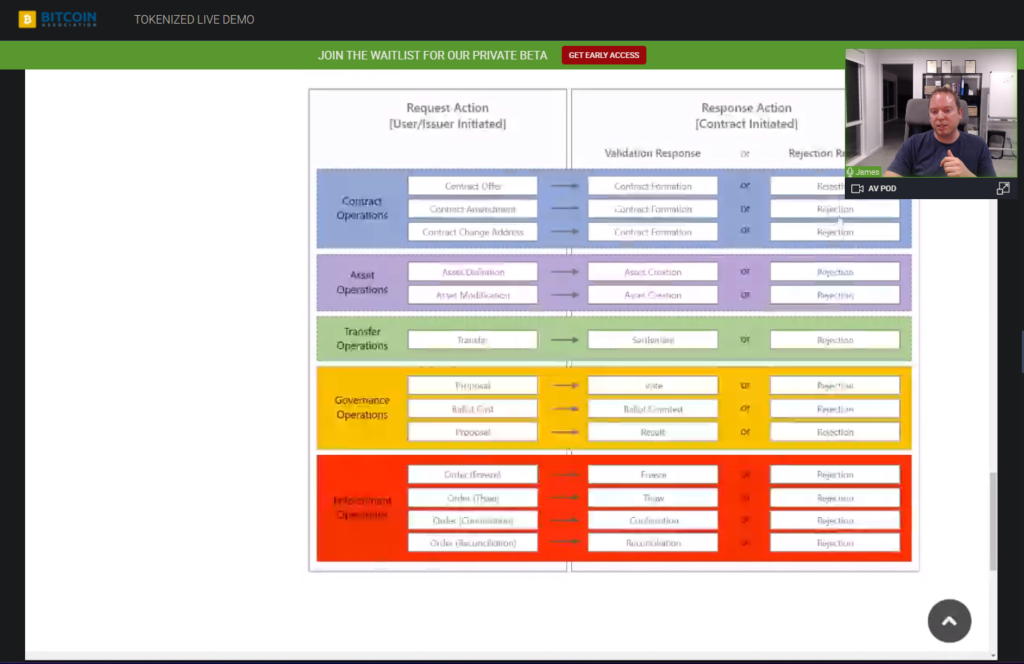 Noting that its usefulness can only come once enough people use and trust the Bitcoin blockchain as a ledger (and thus use it to tokenize contracts), Belding said the BSV ecosystem is still underdeveloped. Although most kinds of assets haven’t been tokenized yet, it’s important to have these kinds of management systems ready in advance.

Where an asset itself isn’t tokenized, it’s also possible to tokenize ownership of the asset, allowing it to function in a similar way. “Stablecoins” are one example of that—only central banks have the authority to manage the base currency unit, but it’s still possible to transact in their value using digital contracts, if provable reserves exist.

Other possible future features include a “bulletin board” type function for open-ended contract offers, and possible integration with other BSV token standards. Belding noted there were other great systems out there, but Tokenized would of course encourage use of its own protocol, regarding it as the best).

Since a digital token can represent almost anything, it’s still hard to explain to a newcomer exactly what a “token” is. In reality the word may be technical jargon only, and like Bitcoin itself, may eventually fade from public view. Similar to “data,” it’s something we know is important even if we don’t fully understand why. Companies like Tokenized are building interfaces that allow anyone to receive the benefits without needing to understand—and only Bitcoin BSV can process the information in an affordable, scalable, and timely manner.