This post originally appeared on the Unbounded Capital website, and we republished with permission from its author Dave Mullen-Muhr.

Mythology is not really invented, it is more accurate to say that it is revealed. Inventing your own mythology to shoehorn an agenda is something else entirely: propaganda. In Square Crypto’s new “Book of Bitcoin Mythology,” they have created one such example of propaganda.

Volume 1 of Square’s propaganda has to do with Bitcoin mining. Their goal seems to be to convince readers that Bitcoin (used by Square to refer to BTC) is an environmentally friendly technology that will provide incredible benefits, which reduce the world’s negative environmental impact. The following are some of the lies that Square Crypto uses to push this agenda.

Lie 1: Green energy is always the cheapest form of energy

The suggestion that renewable green energies are the cheapest form of energy is a difficult one to parse. A quick internet search will yield all sorts of conflicting information making bold claims for and against this proposition. The easiest way to test the validity of this claim is to see what miners are using today. The University of Cambridge has published multiple studies, which provide insight about from where BTC miners are drawing their energy. Their December 2018 study suggested that, “on average, roughly 28% of the total energy supply for both small and large facilities is generated through renewable sources” (p 84). Their subsequent study from September 2020 suggests that “the share of renewables in hasher’s total energy consumption remains at 39%” (p 26). In the sentences that precedes this claim, the Cambridge Study, somewhat ironically for the purpose of Square’s propaganda, notes that:

Despite the increasing transparency and research on the environmental impact of PoW mining, the topic is still typically misrepresented in most sources and on both sides of the debate. Similar to 2018, this year’s survey data shows that a significant majority of hashers (76%) use renewable energies as part of their energy mix. However, the share of renewables in hasher’s total energy consumption remains at 39%.

In such a low margin and competitive business as BTC mining, miners are no doubt using the cheapest form of energy they can find. While the 39% number from the study is large and growing it is far from 100% which is what we would expect to see if Square’s claim were factual. The fact that particular previously-nonviable energy sources, particularly hydroelectric, which are far from populations centers can now be used to mine cryptocurrencies is a major boon that should increase the use of such sources. Highlighting this advantage, however, need not exaggerate the benefit to claim that BTC miners who want to be profitable must use green energy. It is likely that the most profitable miners today (as well as profitable non crypto enterprises which require energy) use mostly fossil fuel based energy and it’s unclear if, or when, this will change.

Lie 2: BTC can process over 10,000x as many transactions as they are today with the same total energy consumption

This lie is a tricky one because it is true of Bitcoin (today sold under the ticker BSV) but not BTC (which Square calls Bitcoin). Because BTC has decided to retain their arbitrary cap on the total number of transactions which can be processed by the network in each 10 minute block (a decision supported by powerful legacy banking and payment processing companies like Square) they are unable to include even 10x more transactions for the same energy consumption, let alone 10,000x more. What Square might be alluding to here is the BTC’s long-promised layer two “scaling solution” the Lightning Network. The Lightning Network has infamously been touted by people like Jack Dorsey confidant Elizabeth Stark, the CEO and Founder of Lightning Labs, as a functional solution that is only a few months away since as early as the Obama administration.

While predictions of a practically usable Lightning Network have fallen short, even in a success scenario it is unlikely that BTC could use it such that their transaction processing capabilities would extend to including 10,000x the transactions with the same amount of energy. Since each hub on the Lightning Network’s would have to develop separate infrastructure and comply with stringent record keeping as licensed Money Transmitter Businesses, their energy consumption would mirror what it looks like to facilitate the existing transaction processing infrastructure plus BTC as a new settlement layer which is occasionally used or referenced.

Lie 3: Improvements to BTC mining hardware are hitting a plateau.

Square’s third lie is a variant of the Malthusian fallacy that “Moore’s Law has hit physical constraints.” There is no indication that BTC mining hardware is anywhere close to hitting a plateau. Transistors continue to get smaller and more efficient on or beyond Moore’s trajectory. It’s strange how popular BTC social media influencers like Max Keiser, on one hand, appear to amplify this misunderstanding of Moore’s law as it applies to BTC mining and transaction processing, but on the other, celebrate things like new cameras which can capture the movement of light by shooting over 10 trillion frames per second. 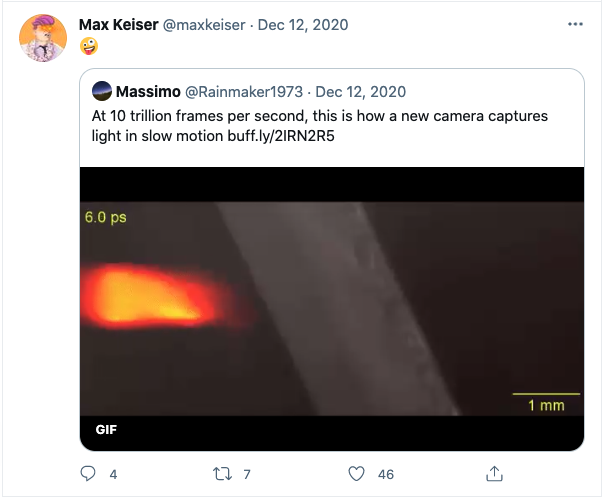 Perhaps Keiser does not encounter this particular cognitive dissonance demonstrated by Square and has a more accurate understanding of Moore’s law as it pertains to BTC mining. If not, the confusion would be somewhat understandable when you consider his, and Square Crypto’s, incentives as major BTC investors and ecosystem players.

The goal of Square pretending that computer innovation has “plateaued”, specifically in the domain of Bitcoin hardware, is to suggest that Bitcoin mining is not as competitive as people assume and thus not as resource intensive and potentially environmentally harmful. Unfortunately for Square, Bitcoin mining is incredibly competitive and reinvestment into hardware, software, and commodities like electricity will be essential for any competitive player. Square thinks that if they can convince the reader that the only resource needed to maintain the system is electricity, and that the electricity sources to power Bitcoin miners will soon be 100% renewable and carbon neutral, then the environmental impact of Bitcoin will be zero.

Lie 4: BTC can replace militaries, police forces, legal systems, banks, and government mints which will result in a net reduction of energy consumption.

A foundational lie of the point of view that informs Square’s propaganda is the conclusion that BTC will be able to replace all/most/a significant component of our existing governmental and financial institutions. For the purposes of the green discussion, this suggestion is useful because institutions like the US military and the Mints run by the Department of Treasury use a lot of energy. If they can be eliminated by BTC, then BTC will have much more wiggle room to achieve net zero or net negative emissions. While we understand Bitcoin (as BSV) to indeed be much more efficient than the systems and processes used by most existing institutions, this is certainly not the case for BTC which, by some calculations, uses an abysmal 740+ kWh per transaction, nearly 5 times more than using legacy systems like Visa. Leaving aside the resource inefficiency of BTC, it has no viable path to replacing banks or the judicial system.

If it cannot replace them, can it at least supplement at a net decrease in energy use? Unfortunately it cannot. Because BTC is unusable as a highly efficient, massively scaled, global, public, database (the promise of Bitcoin) companies that offer services customers expect from banks (home loans, certificates of deposit, free suckers, etc) or courts (due process, binding arbitration, etc) will have to include layers of secondary and tertiary networks which may reference or interface with BTC, but only minimally in order to save on the networks extraordinarily high transaction costs. Bitcoin (as BSV) on the other hand, will be able to massively improve the efficiency of legacy networks which can leverage its global, immutable, public ledger for core functionality. Bitcoin’s (BSV) success will not eliminate existing institutions but it will augment them and increase their efficiency. In the future we imagine, many of the world’s siloed transaction processing networks will be unified onto the common infrastructure of Bitcoin which will offer far greater efficiency relative to current processes. This promises to transform private enterprise like supply chain (see: UNISOT) or record keeping for financial institutions (see: Tokenized) as well as public institutions like military and judicial systems.

Block head Jack Dorsey’s new legal fund for BTC developers who refuse to honor their fiduciary obligations will push the corrupted Bitcoin protocol even further down the road to anarchic illegality.

So many people are stuck on digital currency price, NFTs, ICOs and other buzzwords that dominate the media, yet the ability to do tiny payments is way more than a bubble on the brink of bursting.

Trickle-Down theory states that the growth of wealth for the elites positively impacts the rest of society, as through consumption and investments of the upper class, the lower-class profits, too.