Home » Editorial » Spam transactions in Bitcoin are an oxymoron

The word spam has a very negative connotation and has somehow found itself inside Bitcoin conversations over the years, riddled with controversy on whether using the blockchain for transactions outside of monetary use cases could be labelled as spam. This could be for such things like storing data on the blockchain using the OP_RETURN functionality or for openly conducting stress tests on the mainnet.

The argument for describing these transactions as spam is based on the notion that they obstruct the primary monetary use case and using it for anything else adds a burden to the network that can result in congestion, high fees or even breaking the network.

Small block advocates led by the Bitcoin Core (BTC) developers implemented themselves as the central planners of the system and created a fee market, hoping that by keeping block space scarce it would make spam attacks expensive and deter people from attacking the network. They also believed it was important for everyone to be able to keep a copy of the blockchain to verify all transactions, even though non-mining nodes do not propagate blocks, have no skin in the game and do not contribute to the security of the network in any way.

Big block advocates adopted a free market philosophy. Understanding that Bitcoin is truly permissionless and with volume at scale allows the endless possibilities of use cases to arise that will continue to keep transactions cheaper and faster for all, whilst giving miners sustainability through transactional fee revenue that is essential for their survival at each halvening where the block reward subsidy is reduced by 50%.

Big block advocates also understood that mining nodes are the only nodes that can propagate blocks and earn income from the transaction fees, therefore, by definition of the system, are the only ones that determine whether a transaction can be considered as spam.

BTC developers have disincentivised their own users from using the BTC blockchain, restricted growth of new users and closed the door on a world of new use cases, therefore crippling the long-term sustainability of the network.

A good example of this is with company VeriBlock, who opted to securely store their data on the BTC blockchain. Their business model determined that it is worth paying for these transactions to be able to leverage off the benefits that an encrypted and distributed ledger can provide them.

It was shown that they take up as much as 20% of all transactions made on the BTC blockchain each day, which increases the likelihood of transactions for everyday users becoming expensive and slower during peak periods.

Bitcoin Core developers were not thrilled by this… 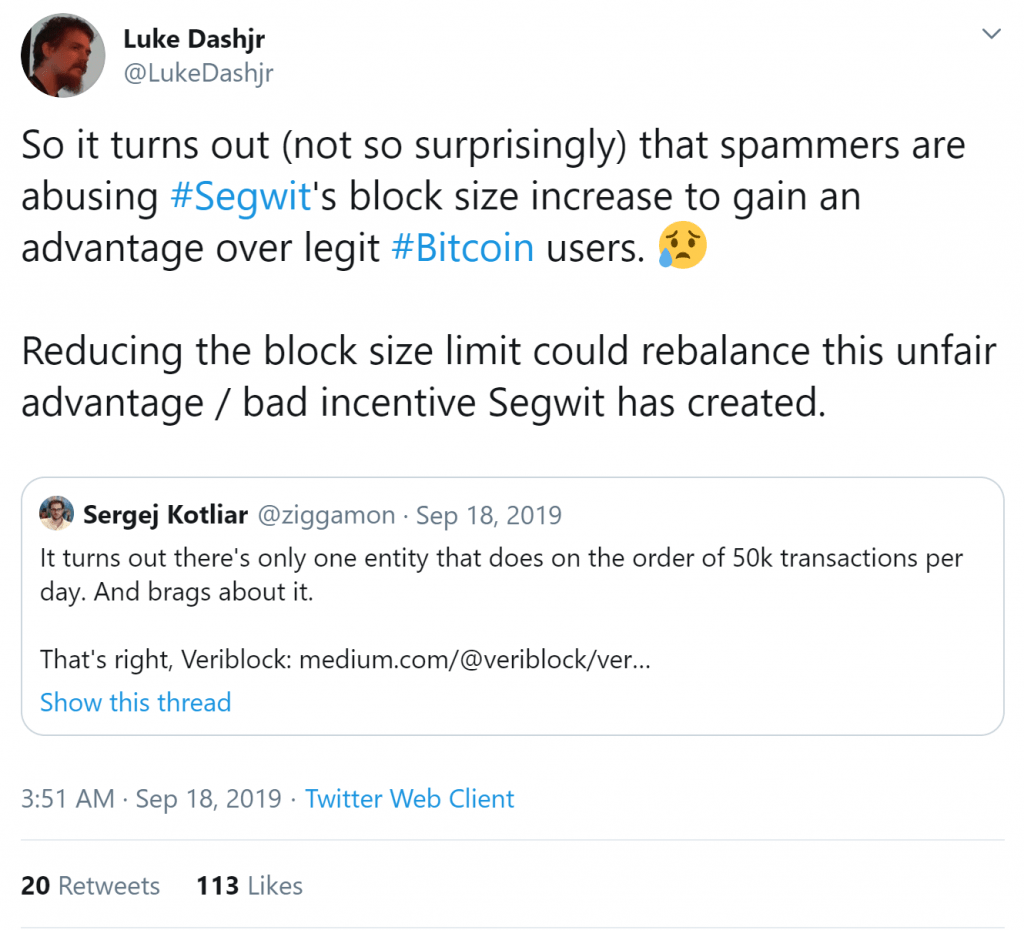 These developers with no skin in the game became dictators resulting in an imbalance of incentives within the system. When challenged, they dig their heels even further into the ground pushing for a reduction in block size limit which would only amplify the issue

The only thing limiting the block size limit does is limit the supply, and excludes the market on both the supply side with small blocks and on the demand side as user will have no choice but to look for alternatives.

After years of debate, the boiling point between the small block and big block community tipped over and a contentious hard fork occurred in August 2017 through the emergence of Bitcoin Cash (BCH) which increased the block size limit to 8MB, followed by another increase to 32MB.

It sparked an explosion of creativity and brought exciting new entrepreneurial ideas back into the picture with the aim to generate transactions of all sorts utilising the power of blockchain with bigger blocks.

In November 2018, there was a split in the big blocker community due to ideological differences, with Bitcoin SV (BSV) Node implementation wanting to continue the roadmap to scale aggressively with the philosophy that it was important to build the highways of tomorrow today, so that the industry could mature faster and be technologically ready to handle becoming the global blockchain of everything.

Meanwhile, BCH development teams failed to scale (still at 32MB limit) and they became the central planners in a permissioned system who determine what transactions on the network are considered spam. Sounds awfully familiar doesn’t it?

BSV welcomes all transactions and allows the miners to decide whether to mine the transaction into the next block. Since they will be rewarded with income of transactional fees, it is ever so crucial for them to not restrict their profitability.

There are cool services like the BSV Gaitling Gun that allow users to stress test the network with up to 820 transactions per attempt, and donates 50% of the transaction fees to miners.

During a stress test this year conducted by the BSV community #OperationDataBlast, the aim was to upload to large media files onto the BSV blockchain ranging from videos, music, photos and books that would be immutably stored on the blockchain forever. It was a huge success as regular block sizes of over 100MB were propagated including a record 256MB block on the mainnet.

Money Button wallet learned the hard way during this event when their non-mining node crashed, taking them offline for a few hours. Rather than advise against spamming the network or against scaling BSV rapidly to cater for their own self-interests, Ryan X. Charles painted selfless insight into the BSV mentality and where it will need to continue to progress in order for the Bitcoin project to succeed in the real world:

Running a node is expensive. Our new instance will cost thousands of dollars per month to operate. As blocks continue to get larger and we have to upgrade the instance many times, this cost will balloon. Since we do not earn money from transaction fees like miners, it will be too expensive for us to run a node.

Bitcoin has always proven itself to become more anti-fragile with each attack, for it to survive it will need to be resilient and constantly advancing. With these learnings, the network becomes more robust overall and can move closer to operating as intended in the Bitcoin whitepaper.

If a transaction has been paid for and a mining node is willing to accept it, it cannot be considered as spam. It is clear now the rest have now fallen behind with their small-minded mentality and lack the foresight needed to survive the future.

The foundation has been set for anyone to openly use and build on top of BSV without asking for permission.

Bitcoin SV is inclusive for all and open for business.