Interest rates are rising for only the second time in 14 years since the U.S. Federal Reserve cut the federal funds rate to 0% in response to the 2008 financial crisis and expanded their balance sheet via “quantitative easing,” which is double-speak for money printing and treasury bond purchases.

The last attempt to increase the Federal Funds Rate took place from 2016 to 2018, which crashed and burned in spectacular fashion where a measly quarter-basis point raise from 2% to 2.25% resulted in the largest one day drop in equities in U.S. history on Christmas Eve of 2018. The world economy pre-pandemic was in a much better position in 2018 than now, yet we have rates rising organically and rapidly in 2022 as the Federal Reserve attempts to finally cut off the cheap money and allow rates to ‘normalize’ once again. Mortgage rates hit an 11-12 year high in April 2022, and savings accounts actually have yield again.

What impact will this dramatic reversal to the economic status-quo have on the relatively new digital currency prices? Not much has changed in the 3.5 years since the end of 2018 when rates were 2.25% in terms of actual digital currency adoption. The primary use cases are still selling a token or JPEG NFT to a greater fool who will pay an absurd price for it. What was the BTC price in December 2018? 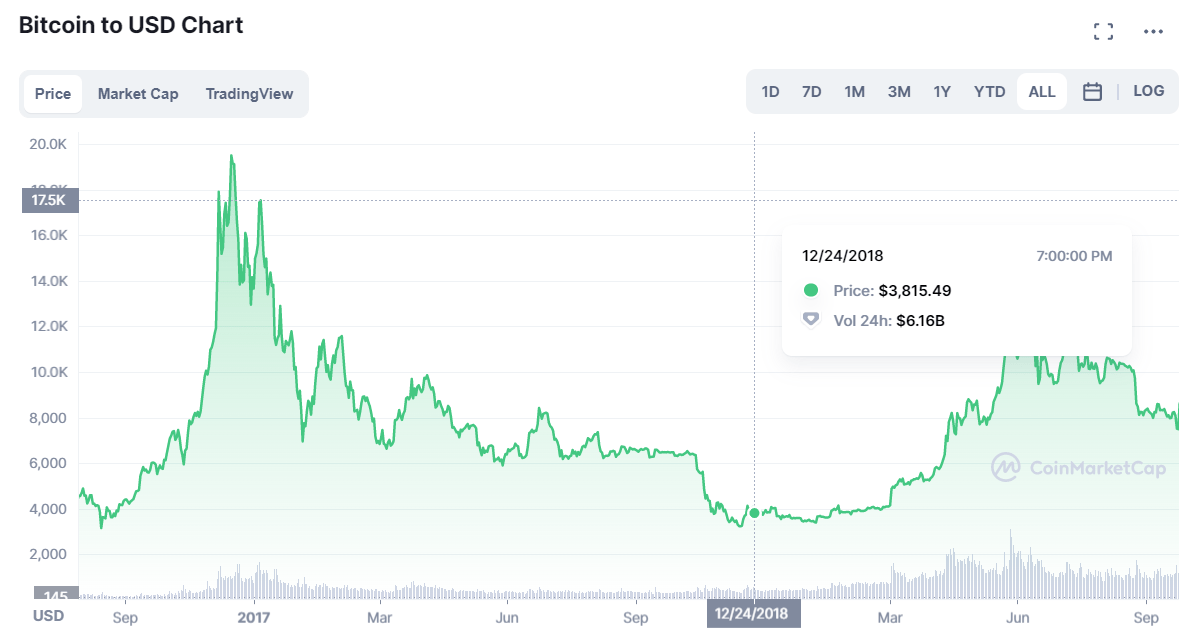 BTC was trading at a near 4.5 year low around $3-4K. The single-threaded “World Computer” Ethereum did not fare much better at around $130. Given that digital currencies have still utterly failed to penetrate the real economy in terms of a method of payment for actual goods and services, I expect rising rates to have a similar negative impact. I do not think prices will crash to these levels, but prices will likely continue to bleed out.

As we emerge from the rigging of the world economy for the last two years by governments into the “new normal,” where equities (somehow) hit all-time highs during a pandemic and digital currencies reached absurd valuations along with the NFTs minted atop them, the risk-on markets are returning to the previous “normal”. Collectibles (TCGs, LEGO, art) also saw a similar boom that has now calmed down.

In a crazy inflationary environment where necessities such that oil, gas, food, and travel prices are going to the moon instead of their food-named token who is going to buy and hold these highly speculative assets instead? Rising interest rates imply a risk-off environment where investors seek stable, solid returns in savings accounts, CDs and the traditional bond market. The market has already begun to price this in.

Choose any digital currency and chances are its price is down 20% year-to-date, a bear market. The U.S. stock indices fell dramatically on 4/22 with the Fed hinting at a potential 0.75 basis point interest rate hike this year. Even though 1-2% does not seem like much, but many will take even a small nearly guaranteed rate of return opposed to an extremely volatile asset, especially since rates are likely going higher. Also, everything counts in large amounts, so large firms with billions under management will take this risk-off approach. This assertion is not without precedent, as nearly the same change in behavior occurred just 3.5 years ago.

The digital currency space has not changed enough since then to decouple enough to avoid a similar fate to equities, especially since none of the coins are used enough in commerce to function as cash. How can digital currencies reverse this trend? Quantitative easing via the Tetheral Reserve of course!

Bryan Daugherty started SmartLedger as a cybersecurity detection tool that will significantly reduce the overall time it takes to identify a data breach.

The country's Ministry of Trade said the order is just the start and by the end of September, the use of digital assets and smart contracts will be ubiquitous.

Founded in October of 2020, Twala is a Manila-based tech startup that facilitates e-signature exercises via blockchain.