After being in development and testing for months, Vaionex has announced the official launch of Relysia, a BSV web wallet that delivers much more than just a secure digital asset storage experience.

The Relysia Web Wallet is open for business!

The wallet allows its users to easily deposit their digital currencies by keying in their BSV address or wallet Paymail or by simply scanning a QR code. 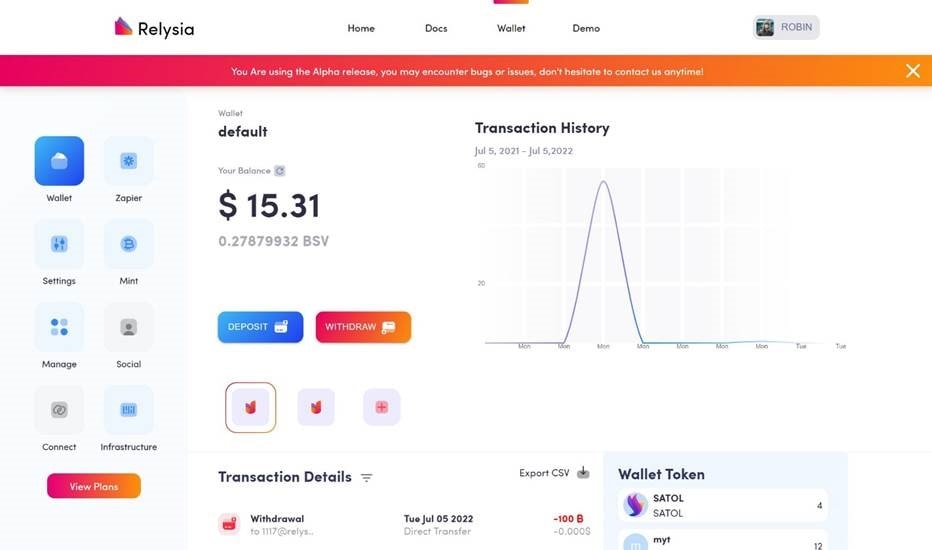 These include allowing its users to mint and transfer tokens for very low fees. It integrates NFTS and other alternative tokens as payment for its users, allows integration of invoices to rival payment systems, including PayPal, and even supports multi-wallet and multi-platform integration. For the developers, it will enable them to interact with other BSV apps through APIs.

Relysia also supports a zero-fee model in which its token manager application enables managers to pay the fees for their users to mint and swap tokens.

Kohze, the founder of Vaionex, is a firm believer in a feeless blockchain model. And with BSV’s fees being minuscule, Relysia can support this model sustainably for its users.

The "feeless" blockchain era is coming. There is no point charging users 1/63th of a cent (in #BSV) per blockchain interaction or transaction. We rather go for frictionless token transfers without fees in our infrastructure and thus enable devs to use BSV as pure infrastructure. pic.twitter.com/IPkDMMvWsR

In a past interview with CoinGeek, Kohze revealed that Relysia will support every token protocol and not just STAS, which his company developed.

“Relysia changes the paradigm of first generation wallets that were just simple tools to transmit bitcoin transactions. We opened our architecture up to all competing token protocols in the Bitcoin SV ecosystem and let the user decide their preference. We moreover identified a key aspect of every token support, the ability to remove transaction costs from the user to not require them to hold any of the base currency the protocol runs on,” he told CoinGeek.

Revolut is bucking this year’s massive tech layoffs tide, raising headcount by 20%, including in its digital assets business which accounts for 10% of revenue.

In a suit filed in Delaware on August 4, Donald Kocher accused former and current Coinbase officers of "breaches of fiduciary duties, unjust enrichment, abuse of control and gross mismanagement."

Coindesk recently published a report on how two brothers used multiple pseudonymous accounts to fake a DeFi ecosystem on Solana—showing that without identity, there's no way to know who's in control.

Tornado Cash is a digital currency mixer that obfuscates transaction history by combining ETH deposits from many users into one pool before paying out Ethereum withdrawals.