After sustained increases over the past three months, hashing power on the BTC network dropped as the summer rainy season end in China.

According to data from Poolin, BTC’s seven-day average computing power dropped from 97.90 EH/s to around 90 (EH/s) since Oct. 24. Poolin’s co-founder Chris Zhu stated in a recent WeChat post that one main reason for the decline is obviously the gradual end of this year’s rainy season in China.

Some hydropower stations in China’s Sichuan province no longer have the capacity to generate enough energy to support crypto mining activities. Crypto miners without sufficient hydropower supply would have to shut down their operations. The alternative is to relocate to other provinces like Xinjiang or Inner Mongolia, where mining farms have a stable, but more expensive power supply generated from fossil fuel plants.

The drop signals that some miners have unplugged from the BTC network. Previously, it had been estimated that the BTC hash rate would go above the 100 EH/s threshold by the end of the year. As a result of the power drop in the network, data from mining pool service BTC.com predicts that bitcoin’s difficulty will decrease by 1.5 percent when it’s set to change in about seven days.

BTC’s mining difficulty had reached an all-time high at 13.69 trillion on Oct. 24, following a 38 percent increase since early August. The rise was attributed primarily to an increase in miners’ hashing power made possible by the abundant and inexpensive hydroelectricity in China’s southwestern provinces.

Hashage’s CEO, Xun Zhen, echoed Zhu’s comments. Zhen added that even if some still can find a hydropower resource, the cost has gone up from $0.04 per kilowatt-hour (kWh) in the summer to around $0.05 now.

Moreover, BTC’s sudden price drop below $7,500 on Oct. 23 to could have sparked a massive scale shutdown of older but widely used mining models like the AntMiner S9. The S9’s break-even price point is between $7,000 to $7,500. Some, such as INBTC, a sister company of Poolin, are exploring how to extend the life of the S9 miner by merging two units into one in an attempt to generate a higher ratio of hashing power over electricity consumption. It remains to be seen if this approach works on a large scale.

As enthusiasm for BTC has faltered and the profitability has decreased, mining Bitcoin SV continues to improve in profitability. 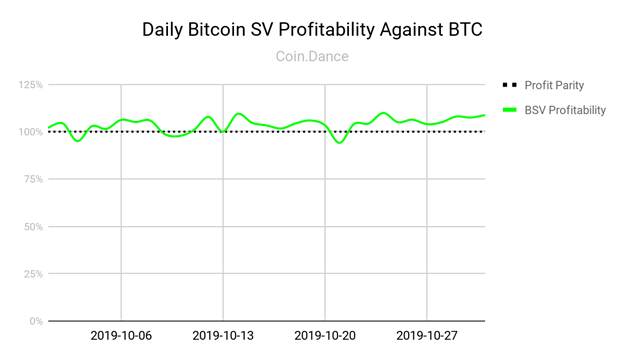 As evidenced by the chart above, profitably on the BSV network has been on the rise as the Bitcoin SV Node team continues their work to restore the protocol outlined in the Original Bitcoin White Paper. The increased block size on BSV nodes well for miners as the ecosystem shifts towards transaction fees as the primary driver of revenue. Expect mining profitability to steadily increase as the BSV transaction volume continues to accelerate. Developer “interest” has turned into a tsunami of “action”, which in turn generates more and more transactions as well as fees that go along with it.