Attending the annual Mining Disrupt conference was an interesting journey this week.

Something about the whole hashing industry is a little bit unsettling, because while I think there are actually a lot of well-meaning people in the industry, I’m certain that almost none of them realize that they have only ever been rewarded by a Bitcoin era that has been heavily subsidized. The first subsidy was by the built-in block reward that was meant to bootstrap the Bitcoin economy in the early days, and the other is more macro-economic: the great era of quantitative easing.

Hashing for subsidies has been extremely profitable, and the continual arms race in hashing has led to levels of efficiency that were frankly unfathomable to the Bitcoin economy just a decade ago. But there is ZERO readiness to function in a world with quantitative tightening and a very low emission rate of the Bitcoin block subsidy.

This lack of self-awareness was embodied at the event by the branded Lambos out front that had their decals scraped off the moment they were done being presented to entrants. 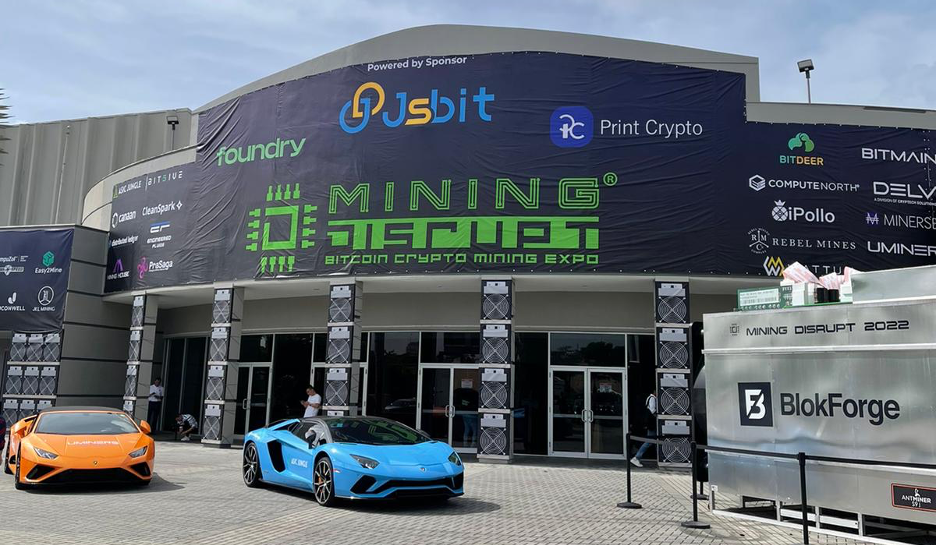 I don’t want to be critical of the event, because in many ways, it was insightful, but there were so many redundant presenters! Essentially, every booth was a mix of ASIC distributors, hosting providers, and pod manufacturers. There were also pools, but only 3-4 showed up to present. Foundry, KuCoin, Braiins/Slush, Luxor and AntPool were there for some variety, but that’s about it!

So in a room with probably 80-90 presenters, nearly every booth was offering the same thing which sort of commoditized the whole experience for me.

However, there were a few standouts.

“The Coin Dad” put together a museum of ASIC mining showcasing every machine that mined bitcoin (that we know of). I spent a serious amount of time reading the notes about these machines, and really enjoyed talking to the other tech history nerds! 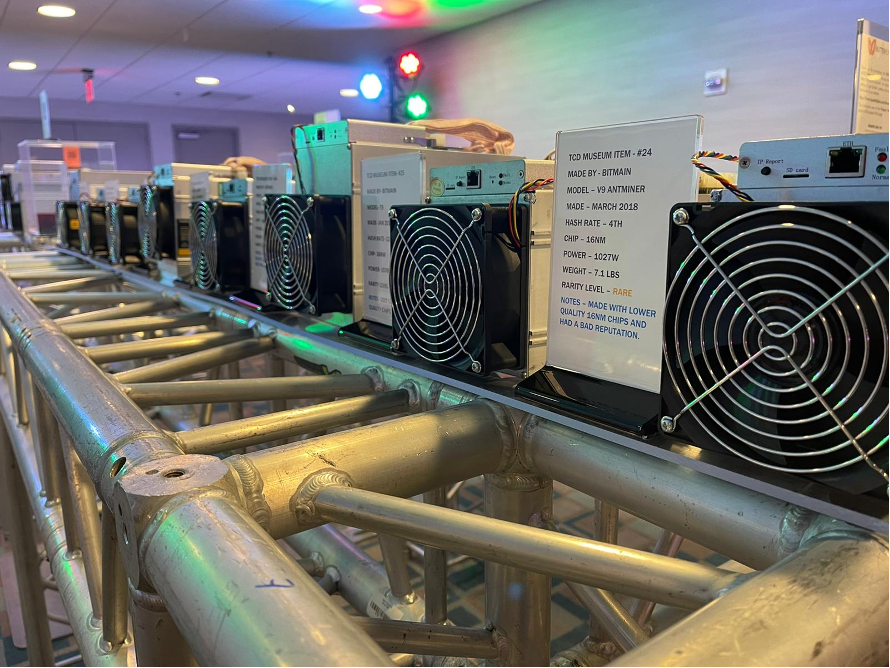 One of the brains behind Braiins

The software also allows overclocking, under-volting and some other exciting tuning options to optimize for efficiency.

Anecdotally, I remember about five years ago that “covert” ASICboost was a major sticking point among small blockers as a major reason why devs and non-mining nodes should have the ability to add soft forks to stop miners from “cheating.” Today, you’re barely competitive unless you’re using ASICboost, and heavily modifying every aspect of your hardware operation.

Another thing that stood out was the heavy move toward immersion mining and hydro cooling pod systems. Modularity was at an all-time high, and the industry is finally figuring out that liquid is better at heat management than air. Who could have known?!

Luxor Pool was another standout because the guy running their table was a fan of CoinGeek and GorillaPool, so he spotted me and was very friendly. We talked about some of the unique tools that Luxor offers, including their juicy affiliate program, and their very useful hashrate price indexes to let you know when it’s time to buy Bitcoin ASICS based on real data! The AntPod hydro pod system was a unique piece of integrated hardware with purpose-built plumbing for liquid cooling that flows through pipes and then right into the hash boards inside the Hydro Antminers. In contrast to the other pods that were little more than well-powered and networked shipping containers, this was an interesting new idea. Operationally, I would be concerned about having so many light duty hoses facing the isle that could accidentally be dislodged by a passerby. But maybe I’m just being paranoid. I also give kudos to the liberal use of colored LED lights in the pods. If you’re going to light them up, I’m glad they’re lit up in a way that is fun. The last, and maybe the most interesting thing at the whole event was the “Dragonfly” integrated pod.

This is a hashing machine designed by MIT alumni and functioning as an amalgamation of the best aspects of ASICs and immersion pods, but without any of the fluff! Rather than buying individual ASIC units and stacking them into racks in what is essentially a trailer, the hashing unit itself is deconstructed and then reassembled as part of a larger, integrated unit.

The hash boards are lined up, suspended from a hanger rail, and they are dropped as a unit into fluid saving (my guess) 80-90% more space vs lining up Antminers on a rack. Then the hash board tubs are slid into drawers where they connect with power, plumbing for the liquid coolers, and then the cooling apparatus on the side of the machine. The entire unit is about the size of a typical bathroom stall, and it’s capable of 5-9 petahashes per second of power which is a massive cost savings over buying ASIC machines and then general purpose immersion tubs and the other necessary hardware.

Conclusion: hashing is moving ever closer toward pure, raw efficiency, and it’s cool to see the work being done. It’s also good to see that the data management capabilities that are created by the existence of such systems are still going largely unnoticed outside of the BSV economy, so there is a ton of opportunity to innovate in that space with very little competition.

It was awesome to connect with some allies, and meet a few people who whispered, “Hey, we quietly mine BSV too.” I also had a dinner with a handful of people who recently saw the light on the BSV opportunity and want to switch their mining over to the only chain that scales in order to serve a very data-heavy client that they have been working with for years and who is interested in seeing their data on the blockchain. 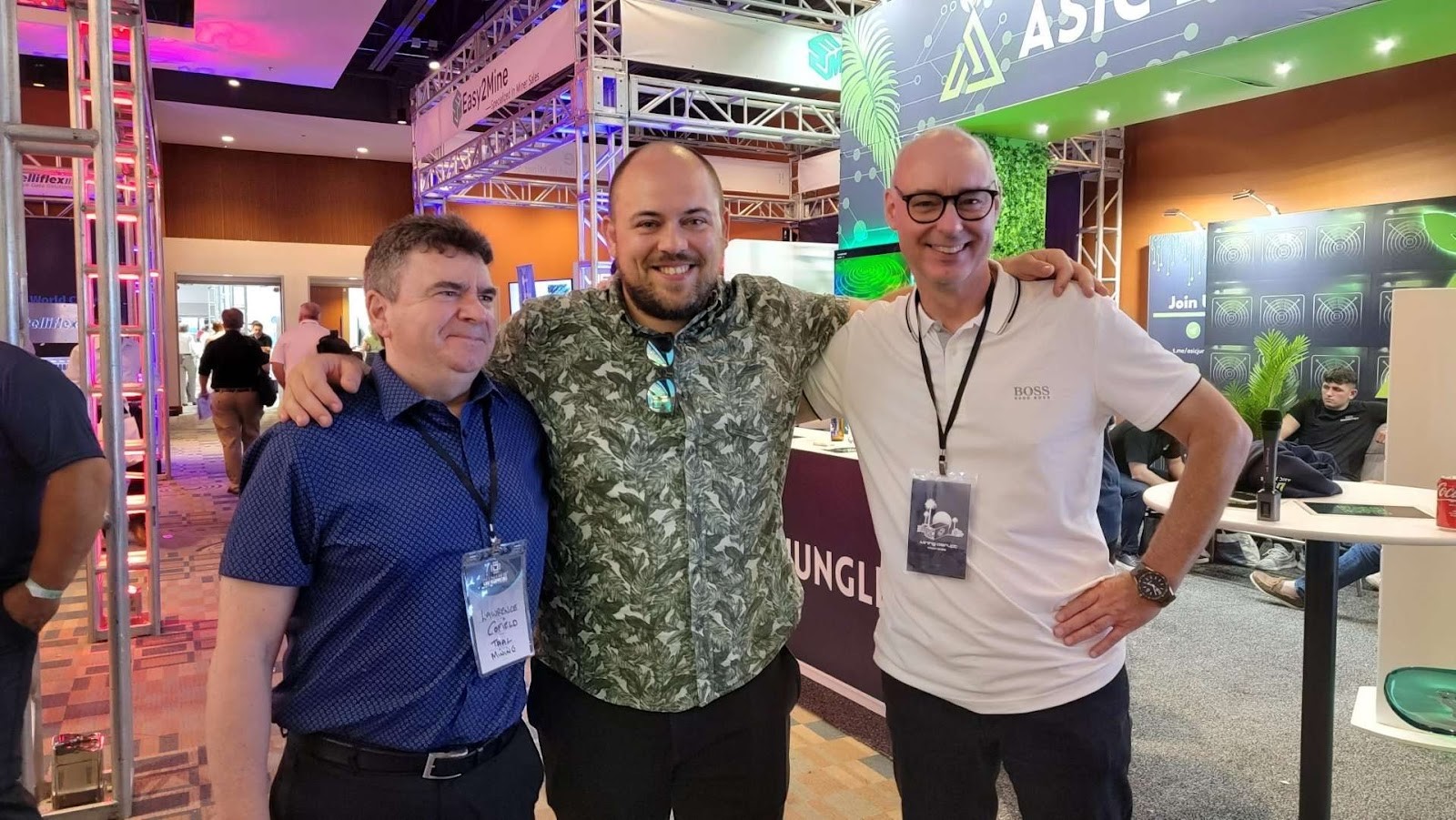 I bumped into a couple of guys from TAAL at the event too!

It was also good to see Stephen from PrintCrypto, who was a banner sponsor of the event. His company is a host to a significant amount of hash power that sits on GorillaPool for some of our mutual retail clients, and he’s a heck of a cool guy. 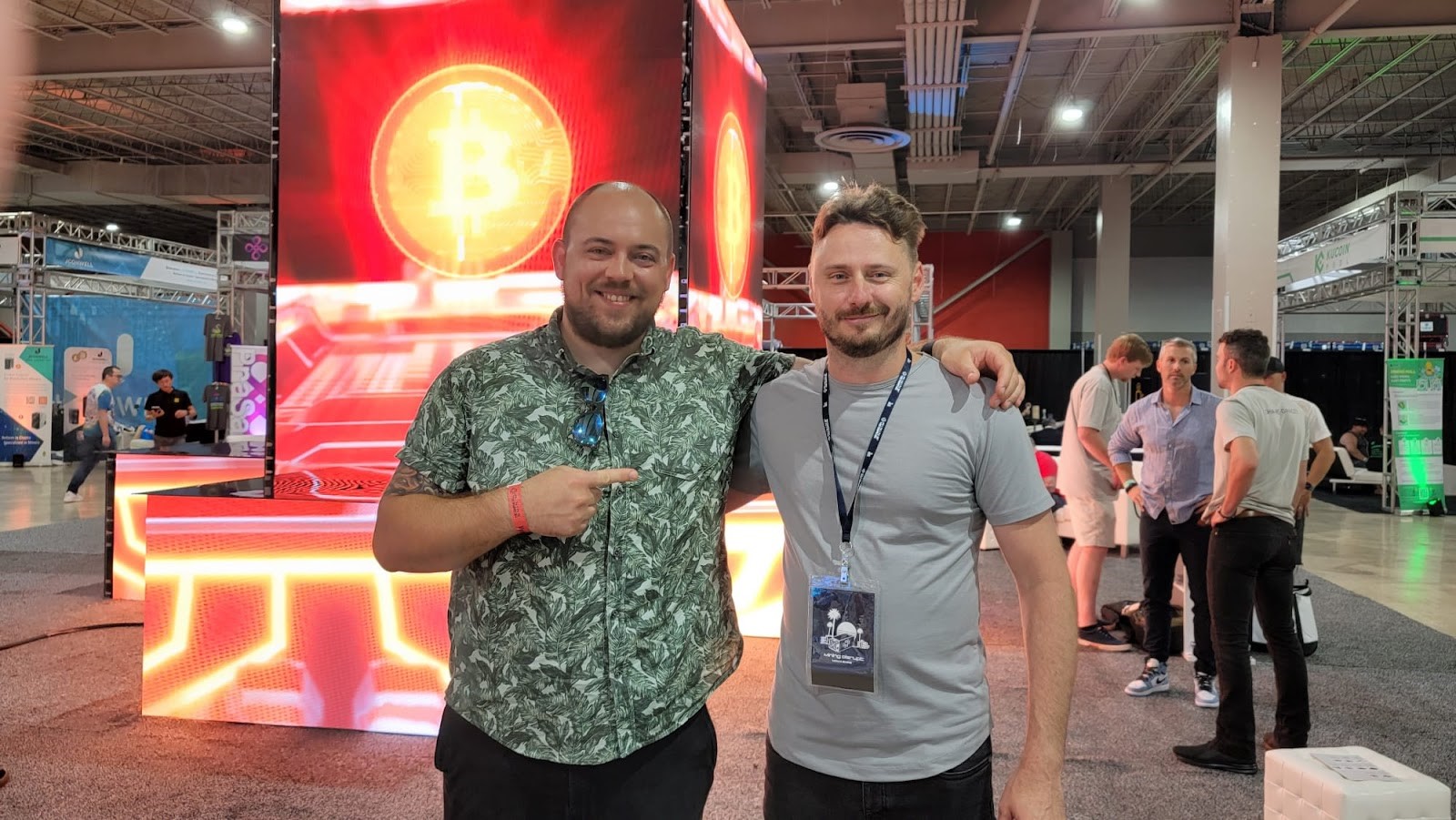 When the world sees the stuff that will grow out of some of my more clandestine meetings from Mining Disrupt, people are going to wonder how they missed the boat.

The 'Democratise Music' panel at the SXSW 2023 will explore how artists can use blockchain-built solutions to capitalize on their creations in ways that aren't possible on streaming platforms.