Home » Business » How the DAA has radically modified ‘miner’ behavior

I wonder how many people know the full story of how this got in the way it was https://t.co/5tS7cxyrAZ

Around 18 months ago, I asked Craig Wright during a livestream about his opinions on BCH’s difficulty adjustment algorithm (DAA):

@ProfFaustus what do you think of bch's DAA compared to BTC's original difficult adjustment of every 2016 Blocks?

He and Reina Nakamoto discussed (timestamped clip below):

Based on the discussion here, the incentives behind it, subsequent behavior of those involved and what others in the space have theorized, it is quite likely that Jihan Wu, CEO of Bitmain, paid Bitcoin ABC Lead Developer Amaury Sechet to implement this algorithm.

Bitmain held over 1 million BCH at one point and had profited significantly from being able to take advantage of the algorithm.

When the price spikes on BCH or BSV, the difficulty of the network doesn’t change. However, the profit parity between BTC/BCH/BSV has changed, providing an opportunity for transaction processors (aka miners) to take advantage.

This game is enabled by the DAA, which is a natural consequence that manifests from central planning.  An interesting point that Craig and Reina raise in the video above is that there may have only been one ‘Bitcoin’ if the DAA was never implemented.

Given the block subsidy, the price of the coin influences which chain processors commit hash to at a given time. Once processors have reaped the rewards on a lesser chain, they eventually sell putting downward pressure on the price. The result is an indefinite cycle of short-term price spikes and dips on the lesser chains that ensure BCH or Bitcoin SV (BSV) will never flip BTC in terms of price or hash.

Fortunately, as the subsidy disappears transaction fees will ultimately settle this issue, but the impacts over the past three years have been dramatic.

Transaction processors are extremely sensitive to the token price because of how volatile the markets are and capital intensive the mining industry is. The difficulty of a chain is a huge factor in determining profit ratios. Modifying the algorithm in any way has dramatic impacts on the incentive structure.

Understanding these points, I believe there is no reason not to revert to the original algorithm where the difficulty adjusts every 2016 blocks. As I have pointed out, it is central planning and pure arrogance to believe that a single developer or entity can decide what is best for an entire economy.

Any argument made against reverting to the original design is subject to the central planning fallacy. It could be made based on hash rate percentage, profit calculations, etc., but the lens of the planner will always be narrower than the market.

Of course, I can rant about this all I want but currently processors have zero incentive to switch back. They essentially have three quite profitable casino games available to them with different odds in mining BTC, BCH, and BSV. Like most socialist policies, something like this cannot be rolled back without significant opposition.

Luckily while Satoshi may not have foreseen multiple SHA-256 chains, he did design a system where the participants must consolidate to one chain in the long run.

"Basically when Craig created the Genesis block, it was over." – @1350 / @ari_cryptonized

Bitcoin can only survive with large transaction volume. When the subsidy disappears, the chain that has the most activity will be the one to survive, putting an end to this low time preference behavior once and for all. 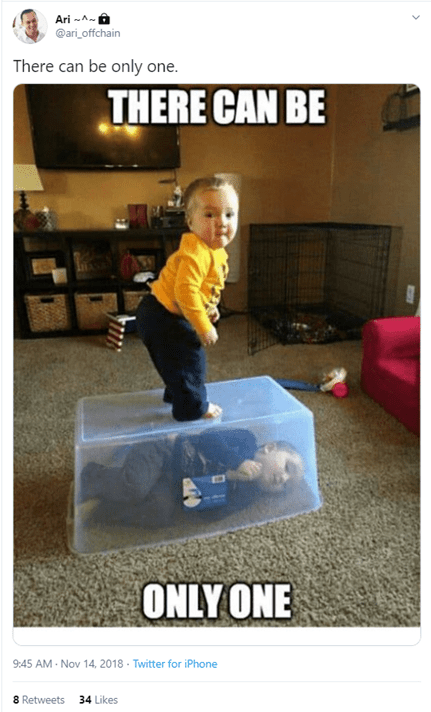 At present people see NFTs as static images, art, etc., or representing a plot of land, but the terminology and structures will change and improve over time, including interoperability across blockchains.