Ask any BTC advocate how block reward miners will be sustained after the block subsidy runs out, and they’ll mumble about world reserve currencies, settlement layers, and people being willing to pay fees in the hundreds of dollars for secure, albeit terribly slow, transactions.

Ask anyone involved in BSV, and they’ll tell you simply that miners will act as transaction processors and will eventually earn more in fees than they do from the block subsidy.

One side has no evidence whatsoever to back up its claims, and the other can point to blocks that have already rewarded miners in this way.

August has been an exciting month for BSV, proving beyond any doubt that big blocks were the way to go all along.

Team BSV has been saying all along that Bitcoin scales on-chain and that miners will be sustained in the long run by fees when the block subsidy either runs out or is diminished to the point where it’s no longer worth mining on BTC, BCH, and other chains.

Anyone with the ability to extrapolate and reason can figure out where this is going. As users engage with popular BSV apps like CryptoFights, and as fees overtake the value of the block subsidy, miners will face increasing pressure to switch their hash power to the more profitable BSV enterprise blockchain.

As denial sets in, people resort to all kinds of mental gymnastics to avoid the truth of what they’re witnessing before their eyes. Some took to Twitter, Reddit, and other social media platforms to try and discredit the record blocks on BSV, claiming that they were full of spam and that miners will never switch to earning a token that’s worth 300x less than BTC.

Yet, what they didn’t mention is that it’s also 300x less expensive to mine BSV than it is to mine BTC. As blogger Zemes Gaoson explains in his excellent blog post the economics of Bitcoin mining, the block reward balances out because the ratio between hash power and price on both BTC and BSV is essentially the same which is 300:1 at the time of writing. These ratios fluctuate, but they mostly sync up and move in unison.

So, if you can mine BSV for 300x less than BTC, and the price of BTC remains 300x more than BSV, the block subsidy ceases to be the deciding factor. What then comes front and center is transaction fees. BSV has the clear and growing advantage here because of its big blocks and the growing number of applications creating demand for transactions.

In his eye-opening post, Gaoson argues that the market is currently ignoring the transaction economics right now since they’re still a small portion of the overall reward, but that it won’t be able to do so forever as the transaction fees in BSV begin to outweigh the value of the block rewards.

Add to this that the BTC-BSV price ratio is likely to decrease as banks clamp down on inflows to exchanges, which BTC relies on since nobody actually uses it, and the pressure on miners to switch away from BTC will grow even more intense. If Tether implodes and sends BTC’s fiat price plummeting, this could all come to a conclusion much faster than anyone expects.

BSV has no ceiling, and BTC has backed itself into a corner

Since BSV has unlimited block sizes in its future, and BTC is ideologically committed to 1MB blocks, there’s a ceiling on what percentage of income earned from each block can be fees on BTC, and there’s no limit to what percentage that can be on BSV.

In other words, BSV’s fee percentage could hypothetically be 90%, meaning 90% of the fees in the block are transaction fees, and BTC’s only weapon to combat this is to jack fees up higher and higher. That’s a problem for a blockchain with blocks that are already only 10% full at times because of the absurdly expensive transaction fees. Do you see the writing on the wall yet?

The heat is turning up

After the record-breaking blocks were mined, several smart miners got the message and switched some of their hash power to mining on the Bitcoin enterprise blockchain. TAAL Distributed Information Technologies Inc. (CSE:TAAL | FWB:9SQ1 | OTC: TAALF), which is often accused of having a monopoly on BSV mining, saw its share of the hash power shrink to around 40%. 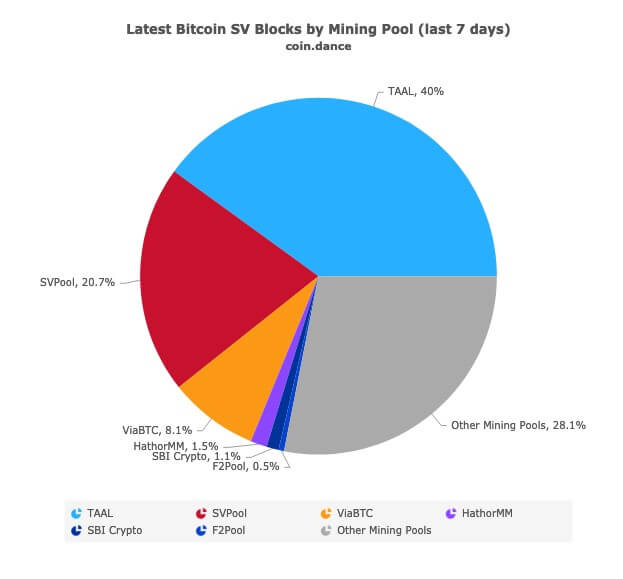 This is an interesting development, and yet, 2GB blocks are just the beginning for BSV enterprise blockchain. Teranode has already proven that it’s capable of 50,000 TPS today, and there’s no scaling ceiling in sight.

Turning the temperature up even higher, BSV applications are being built faster than anyone can keep track of, with CryptoFights, Haste Arcade, Peergame, and others generating tens of thousands of transactions per day. Before its servers needed an upgrade in July, CryptoFights alone was generating over 500,000 transactions daily. Caught off guard, it had to upgrade its server infrastructure due to the tidal wave of demand from players, it’s already relaunched and generating over a million daily transactions as it grows in popularity.

All of this will force rational miners to consider the simple equation that underpins the economics of Bitcoin mining: Miner’s block reward = block subsidy + network transactions fees.

As transaction fees become more relevant and the block subsidy diminishes with each halving, miners will switch to the most profitable option, and that will be BSV.

Satoshi was right about everything

Satoshi Nakamoto himself predicted most of what’s happening in Bitcoin today. He told us Bitcoin never really hit a scaling ceiling, he told us mining would end up in data centers, and he told us miners would eventually make most of their money through transaction fees.

All of this is being proven true on the BSV enterprise blockchain. We don’t need to wait years until the other chains crash headlong into brick walls of their own making. The warnings are painted in block capitals on said walls for all to see.

In time, these recent big blocks will be dwarfed by blocks hundreds and thousands of times bigger. But for now, let’s celebrate Bitcoin enterprise blockchain’s success due to its superior economic model. BSV has already won.