Home » Business » How to get your hands on Bitcoin SV

In our recent podcast, Ryan X. Charles, the founder of Moneybutton, talked about the difficulties of ‘onboarding’ people in the crypto world. Buying any kind of currency or financial product is harder than buying other things because of financial regulations – and the regulations are more complicated when you’re dealing with crypto.

So if you’ve heard about the advantages of Bitcoin SV (BSV) and decide you want to start using it, how do you do that? What follows is a newbie’s journey. I’m sure there are easier ways to do it, but for anyone in the industry who’s trying to make onboarding easier, here’s what you’re trying to save people from:

1. According to a list on Binance, there are 107 exchanges which will convert from another currency into BSV. But, frankly, a lot of them look complicated, as if they’re designed for professional traders. And only a small number currently offer BSV conversion direct from the biggest fiat currencies (although more are doing so all the time).

To register with any exchange involves some compliance processes – sending them copies of your passport or driver’s licence or whatever. Rather than go through that again, I decided to use my existing CoinBase wallet which was already set up, even though you can’t yet buy BSV directly from CoinBase.

There wasn’t much money in my account so I deposited some funds from my bank account in the normal way, using CoinBase’s bank account number and its sort code at Barclays. So far, so good.

2. Within CoinBase I had to change my pounds into a cryptocurrency that I could convert into BSV. I chose Bitcoin Cash (BCH). So I went to the BCH wallet in Coinbase, pressed Buy and chose the GBP Wallet into which I’d deposited the new money. 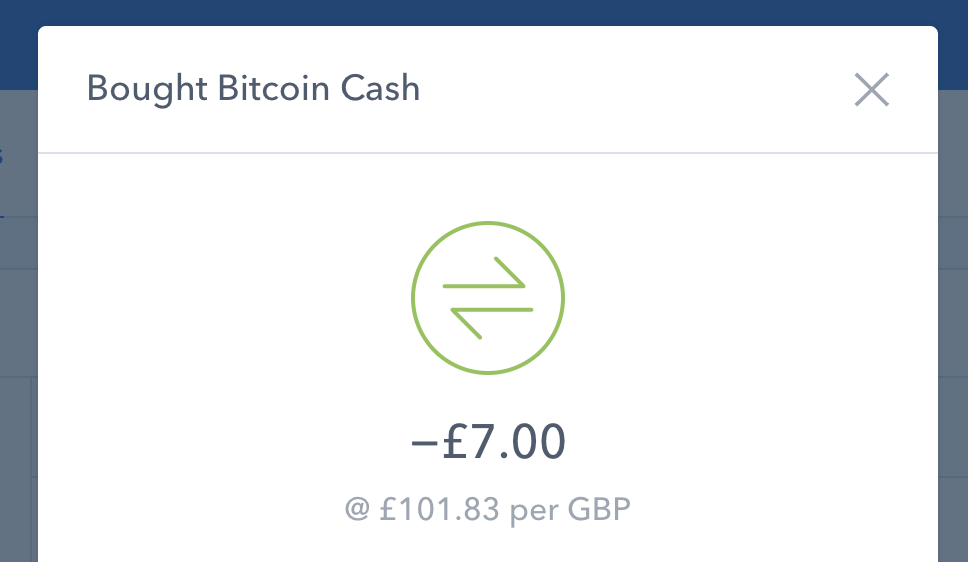 3. Next, I went to ShapeShift.io to convert my BCH to BSV, using CentBee as the wallet to which I would send it. You have to sign up with ShapeShift, and then you can pick from a large selection of currencies to convert between. I selected BCH in the Deposit box and BSV to Receive: 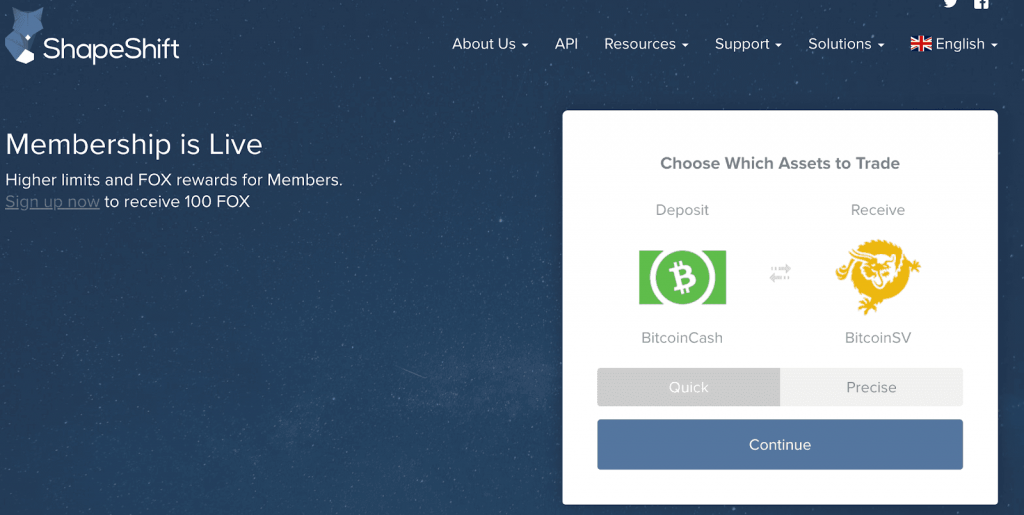 4. Now we’re getting to the complicated part. To tell ShapeShift exactly where the money is coming from and where it’s going to, I needed keys from both Coinbase and CentBee. Here’s the ShapeShift form to fill in: 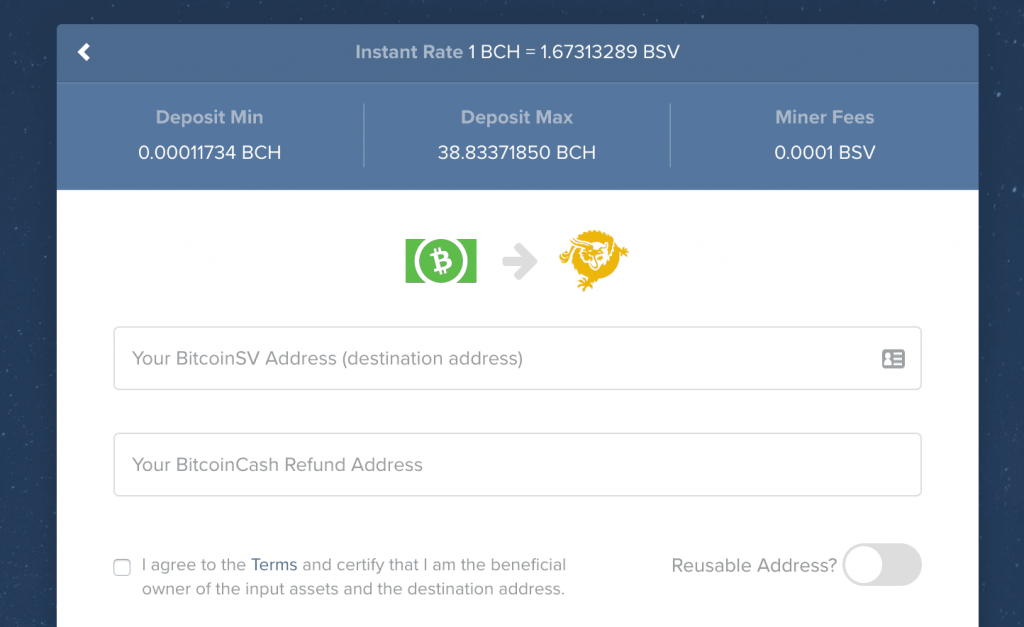 As a kind of insurance policy, ShapeShift asks you for a Refund Address (from CoinBase, in my case).

5. I went back to CoinBase to find the refund address. Tapping a little icon at the top brings up a screen from which you can click to show a QR code and its equivalent in letters and numbers: 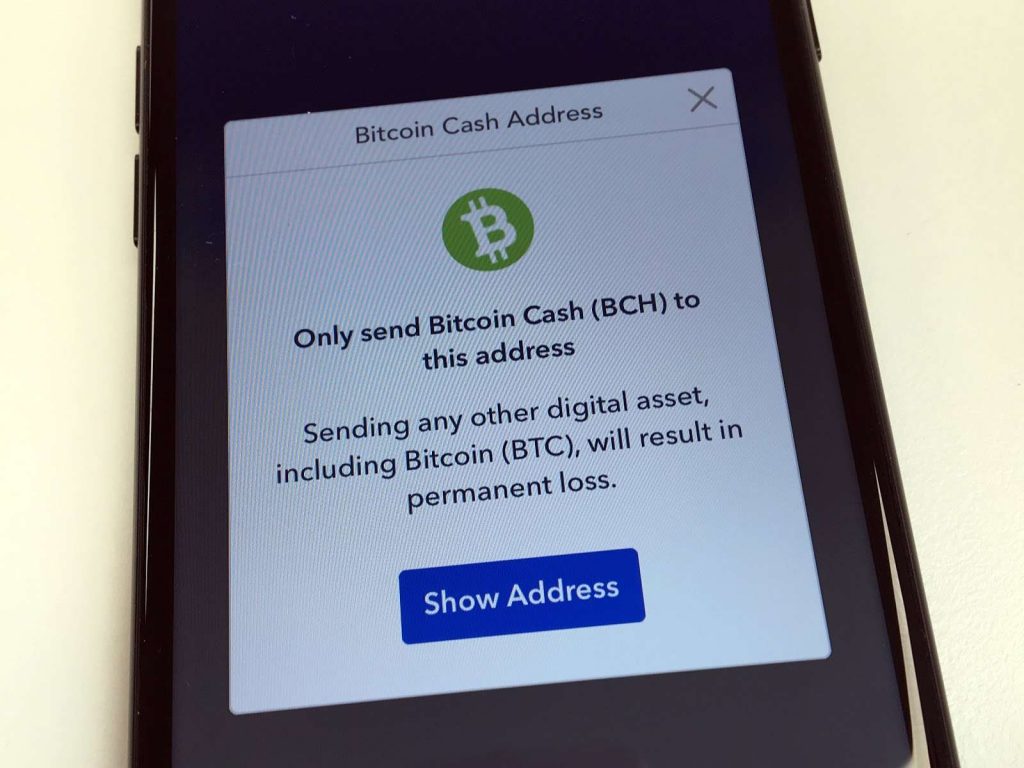 I copied and bluetoothed the key from my phone to the laptop on which I was using Shapeshift and pasted it into the field on the ShapeShift form.

The other field needed the CentBee address to which I was sending the BCH. That was easier: just tap the open hand symbol on CentBee (to signify ‘receive’) . That produces a QR code and the same as text to send to the laptop.

6. Everything is now in place: CoinBase is ready to send the BCH to ShapeShift, ShapeShift ready to convert it to BSV and CentBee is ready to receive my BSV. I pressed Start Transaction on ShapeShift.

The progress bar shows me that it’s working:

And when I check back later, there’s good news:

On my CentBee wallet, I can see that the money has arrived. I am the proud owner of BSV!

Next time it will be a whole lot easier because I’ll know what I’m doing. But also because more and more exchanges are offering BSV and I’ll start with one of them, which will cut out a few steps in the process.

I have already spent my BSV. Stay tuned to find out how I used MoneyButton to commission a graphics artist in Bangladesh to design a logo, via Fivebucks, for the princely sum of five US dollars (or rather, its equivalent in BSV). It was pretty good too!

The President of the Islamic Republic of Pakistan, Dr. Arif Alvi, has spoken positively about the benefits of blockchain technology following a meeting with a BSV blockchain delegation in Islamabad.

This week, Nigel Smith checked in with Bitcoin inventor Dr. Craig Wright to cover a variety of topics—from the recent Kleiman v Wright and COPA cases to Lightning Network and BTC Core, and many more.

Authorities have launched a probe into the two Cajee brothers, the founders of Africrypt who allegedly vanished with billions after a Dubai firm started paying some of the victims.