With Bitcoin SV, 32MB blocks are just the start for Bitcoin Cash. On Tuesday, the full node implementation designed to fulfill the Satoshi Vision for Bitcoin mined a 64MB block—the largest ever on a public blockchain. 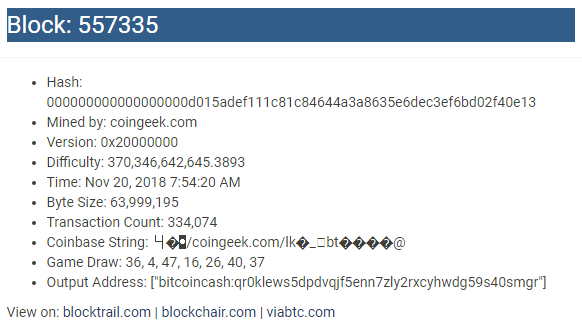 The record-breaking 64MB block comes shortly after SVPool mined a 38MB block at block height 557333, and is part of a longer run of 10 blocks with an average size of over 20MB. Mining blocks 32MB and beyond is important for Bitcoin Cash, as it shows that professional mining efforts are more advanced than others and that the network is capable of routinely mining larger blocks. The achievement is part of the ongoing professional stress test conducted on the Bitcoin Cash network. The stress test, powered by Play.BCH.cash and independent of any Bitcoin Cash implementation group, is designed to test the throughput capacity of the Bitcoin blockchain. The group previously ran a pre-test on November 10, in which Bitcoin SV mined five 32MB blocks—and hasn’t stopped setting records since.

Since November 17, the stress test team has been sending transactions onto the Bitcoin Cash network. Instead of testing both networks, the team opted to focus on generating large volumes of transactions on the BCHSV chain although many of the transactions are being replayed on the BCHABC chain, resulting in a string of blocks at miner configured soft limits, all set to less than 10MB.

The team paused the test to allow transactions to propagate in hopes that more big blocks will be found as the transactions migrate from validation queues into mempools and are mined over the next 6-12 hours. The test will resume in the next 24 hours, after at least half of the transactions delivered onto the network are successfully mined.

Bitcoin SV, which seeks to restore the original Satoshi protocol, keep it stable, enable it to massively scale, and allow major businesses to confidently build on top of Bitcoin Cash, is currently in the midst of a hash war with Bitcoin ABC, which has taken an early lead due to an artificial burst of support from hash power “rented” by its supports Bitcoin.com and Bitmain Technologies from miners on the rival Bitcoin Core (BTC) network. Bitcoin SV, on the other hand, operates on the “miners choice” philosophy, delivering sustained Proof of Work from miners committed to support the Bitcoin Cash network on an ongoing basis and which should count as legitimate votes for the Nakamoto Consensus that determines protocol rules according to the original Bitcoin white paper.

Although it’s still ongoing, the Professional Stress Test is already proof that Bitcoin SV is correct about its scaling roadmap: the Bitcoin Cash chain can handle much larger blocks and quickly scale for big enterprise use. For the recent November 15 protocol upgrade, Bitcoin SV lifted its default maximum block size to 128MB from the prior 32MB—opening the door to the record-breaking 64MB and 38MB blocks.

With the November 15 protocol upgrade, Bitcoin Cash—with Bitcoin SV—has finally come of age, and it’s no longer a dev experiment, but a mining-backed project. If you’re interested in seeing the true original power of Bitcoin, we recommend you to join the bComm Association and to also come to the CoinGeek Week conference from November 28-30 (with a special advance Miner’s Day on November 27), the perfect venue to meet the thought leaders and discuss the implications of the world’s first Bitcoin Hash War fought according to Nakamoto Consensus. Be part of the community that wants to let the original Bitcoin show the world its true power as sound money and so much more.