An insightful post by Dan Held on Medium does an excellent job of detailing the original proof-of-work (POW) concept that is an integral part of the cryptocurrency model. Many crypto opponents have deemed the POW concept as being wasteful, but Held is able to show the fallacy in their argument.

One of the major complaints about cryptocurrency is the energy that is consumed through the underlying mining practices. However, Held points out that everything we do—and have ever done—is based on energy. He refers to a chart from the BP Statistical Review of World Energy 2014, which shows that energy consumption has increased in direct proportion to the global gross domestic product (GDP): 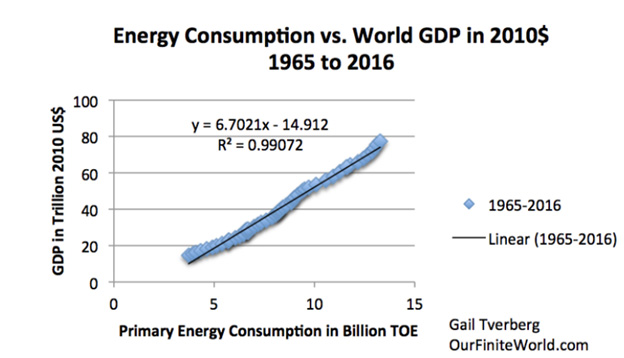 When Satoshi Nakamoto first applied POW concepts in order to change how “consensus between humans is formed from political votes to apolitical votes (hashes) via the conversion of energy.” Held specifies that POW is about the physics behind a movement, not about the code. Since cryptocurrency is a commodity that is minted from energy, what Held calls the “fundamental commodity of the universe,” POW turns “electricity into digital gold.”

Held goes further, asserting that BTC’s ledger is only immutable if it is expensive to produce. This is because the public ledger is secured by the collective hashing power, which is the sum of the aggregate energy expended to create the security. This, says Held, makes POW a feature, not a bug.

More than a few “experts” have come out in opposition to cryptocurrency mining, with some even speculating that it will bring about the “end of the world.” One of these, a supposed financial economist, went so far as to produce a long piece on why cryptocurrency mining will be the undoing of the world. The economist, Alex De Vries, attempted to show energy consumption calculations that were completely off base and founded on data that he apparently didn’t understand.

De Vries tried to base his calculations on the energy needed for each block. However, since each block can have different amounts of transactions, it is impossible to use this as a baseline. As Held says, “More transactions does not mean more energy.”

Held also points out that that the “economic density” of a crypto transaction is constantly increasing. As the blockchain evolves into a settlement network, the energy unit is able to secure more economic value.

The article continues to break apart the theory presented by De Vries. While the economist tried to stir the pot and spread FUD (fear, uncertainty, doubt) with his “expertise,” cryptocurrency mining has already been undeniably shown to actually increase in efficiency over time.

Mining operations are movable. They can always be located in those areas where the least-expensive energy can be sourced. This makes crypto mining the lowest value of electricity. Says Held, “This may solve a problem with renewable energy sources that have predictable capacity that is otherwise wasted, like hydro and flared methane. In the future, Bitcoin mining could help with renewable energy sources that have variable output — energy producers can plug in miners, and store the excess power as [BTC].”

What does it all mean? Put simply, cryptocurrency mining is an integral part of the cryptocurrency ecosystem and, as it grows—as has been seen with virtually every innovation since man discovered fire—it will become more efficient and substantial.