The Bitcoin SV ecosystem took a leap forward during one week in February, when 30 developers gathered in Lisbon, Portugal for entrepreneur Jack Liu’s second CambrianSV Bootcamp.

The first Bootcamp was in Bali towards the end of last year. In Lisbon, Jack suggested the theme of “efficiency”, challenging the developers of independent apps and projects to find ways to integrate with each other’s work, taking advantage of the ability of the Bitcoin SV blockchain to share data.

It was a theme echoed by speakers at the opening night dinner. “Now we’re opening up the next phase of this book,” said Jimmy Odom of Bittboard, “so what can we each do inside of our own projects that we open ourselves up to a broader world?”

For Ryan X. Charles of Money Button, it was a question of taking advantage of “a really unique opportunity right now to create real businesses”. And for Paul Martin of RelayX, a startup founded by Jack Liu, their work should be measured in terms of “how you change people’s daily lives”. Paul stressed the collaborative nature of the Bitcoin ecosystem, encouraging all the developers to “see ourselves as working for Bitcoin – Bitcoin the organism, Bitcoin the network”.

There was a sense of the group as pioneers, setting out to change the world through Bitcoin projects. That was dramatised by a visit to the mouth of the Tagus river, to the monument to Portugal’s great explorers (above) who set sail from there in search of adventure and new prosperity.

Beneath the monument, Joshua Henslee of the Bitcoin Assocation said he had felt “obligated” to abandon the security of a regular job to work on “this Bitcoin thing”: “I need to put my talents towards this …I felt like I need to be out on the front lines, helping out.”

Andrew Kondelin of Loggeru made a direct connection between the ancient explorers and today’s BSV developers: “imagine being the guy to go around the tip of South Africa and circumnavigate the world, or the guy that took Florida for Spain. These opportunities exist in Bitcoin SV right now. The massive land grabs that we can make right now, you can’t make in any other place in technology.”

After five days together, there was plenty to show from a productive week, developing and connecting products. For instance, there was a demonstration of a new integration between the image recognition software Bittboard and the advertising platform TonicPow.

But when it was time to go their separate ways, it was the intangible benefits of spending a week together in Lisbon that were celebrated. As Ardian Tola of Ataraxy put it: “life is not about technology, life is about higher things. And the beauty of this technology that we’re working on is that it’s illuminating those higher things for us.” 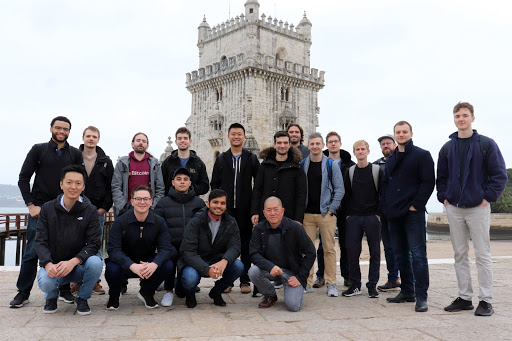 Legislators concerned about the amount of energy that some blockchain networks consume recently held invited six witnesses for insights on this issue.

The Russian intelligence service claims to have seized 20 luxury cars and digital assets from REvil, the gang behind JBS, Colonial Pipeline, and other hacks.

Reddit’s Alexis Ohanian expects that the play-for-fun games will be pushed out in about five years’ time, as a new breed of games allowing users to make money take over.

Job postings related to Bitcoin, blockchain, and other related roles saw the highest surge in 2021 as over $30 billion flowed into the sector, according to LinkedIn.