Observers of the crypto sphere from a Bitcoin SV (BSV) standpoint are used to seeing deceptions and false narratives laid out by BTC concerning Bitcoin. However, the lies about Bitcoin have reached a whole new level recently.

The famous @Bitcoin Twitter account with over 1 million subscribers has changed its description a few days ago. What we can witness there is the ultimate attempt to morph public’s perception of Bitcoin.

How much misinformation about Bitcoin is possible?

A lot, as it seems. Let us have a close look at the new description of @Bitcoin. Remember that most people involved in cryptocurrencies are following this account and on most crypto media outlets, the lies being pushed there are perpetuated in the same way since at least the past 3 years. 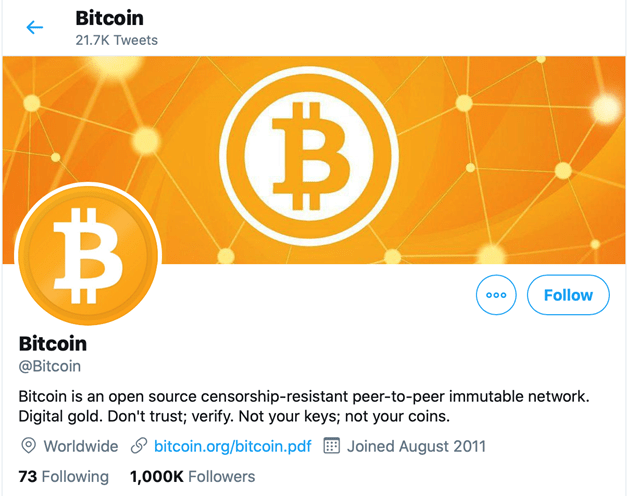 In this description, Bitcoin is defined as “an open source censorship-resistant peer-to-peer immutable network. Digital gold. Don’t trust; verify. Not your keys; not your coins.”

Sounds good? Almost nothing in this description is true. Let us go through these points one by one and help others to understand why Bitcoin SV is Bitcoin and how BTC tries to be something way less valuable.

BTC claims to be censorship-resistant, however governments are able to interfere in the work done by miners. It is quite easy for governments to enforce laws on miners and block addresses, transactions as well as almost all relevant movements from BTC to fiat or the other way around.

Honest miners follow orders given by law enforcement and governments all around the world. BTC should not think miners would invest tremendous amounts of money into their equipment just to help money laundering and other criminal activities.

Bitcoin is indeed permissionless, but not censorship-resistant as told by BTC. If you want to reduce censorship by governments, it is not done by technical solutions, but by political ones.

Bitcoin is meant to be a peer-to-peer electronic cash system as described in the whitepaper. BTC is not peer-to-peer at all right now, and will be even less peer-to-peer in the future once the Lightning Network is running.

With Lightning Network, transactions are not peer-to-peer anymore, but peer-to-miner-to-lightning-to-miner-to-peer. Devastatingly inefficient, insecure and far from having low transaction fees.

BTC claims to be peer-to-peer, but is not and is even trying to move away further from peer-to-peer with Lightning. They still call it peer-to-peer though, in order to deceive people. It is the attempt to shift away power from the Bitcoin blockchain to a second layer technology run by them.

The Bitcoin SV approach: Bitcoin SV is truly peer-to-peer, aiming for full use of the SPV technique described in the white paper. No second layer technology for transactions is needed, everything is done on chain.

BTC presents itself as “digital gold.” There are plenty of reasons why this is not the case though.

BTC proponents have it all backwards. They want BTC to be “digital gold” and to be used as cash later on, which cannot work in absence of an existing use case.

Bitcoin SV has a whole other approach than BTC to be cash. With Bitcoin SV’s Metanet and all its utility features, there is a use case for Bitcoin SV before it can be used as cash. This is exactly how it has to be done: having a use case first (utility), then secondly being used as cash (interchangeable asset).

Furthermore, BTC’s and gold’s inflation are different. BTC has a kind of centrally planned inflation set in code and will be deflationary once the maximum supply of BTC coins has been hit. Gold on the other hand has a market driven inflation without a known maximum—whenever there is more demand for gold in the market, gold mining corporations will increase their production. Once the gold supply on earth is used up, it is not impossible to mine gold on asteroids and other planets in the future. So there is no known maximum supply for gold so far.

The Bitcoin SV approach: Bitcoin SV is not “digital gold” to sit around waiting for price appreciation, but is meant to be used via microtransactions in the Metanet. If anything, growing utility is the price driver, not the other way around.

The “Don’t trust; verify” narrative is an attempt to make people believe using BTC or being involved in BTC requires being a miner or at least verifying every finished transaction via your own “home node.” However, this is not how Bitcoin is described in the whitepaper. Verifying a transaction from a non-mining node (which is in fact not a node at all, but that is another story) does not contribute to the network. There is no advantage for users to verify.

But don’t you want to verify everything on your own?

No, thank you. As a user of Bitcoin, I do not want to verify anything. I want to sign a transaction and hand it to the merchant. That is, in an ideal Bitcoin world, the most obvious use case—a consumer paying a merchant. It is up to the merchant to broadcast the transaction, and if necessary, to verify it. Most of the Bitcoin users have no interest in broadcasting a transaction done to a merchant on their own or any interest to verify it. If the merchant does not broadcast the transaction, it is not the customer’s problem. The customer has handed over his signed transaction and got his purchased good or service already. The deal is done before anything is to be verified by the customer.

The Bitcoin SV approach: Bitcoin SV leaves it to professional miners in huge server farms to run nodes. Users will be users only, enjoying all advantages of Bitcoin without having to contribute to the network.

Not your keys; not your coins?

Now this “Not your keys; not your coins” sounds really good at first glance. It means that anyone who holds keys actually is entitled to the coins. But that is so wrong, you cannot even imagine.

BTC is selling this narrative to let people believe they can gain property rights by gaining access to coins. Access to coins is just that: access. With sound law enforcement, unlawful accessed coins will be seized and returned to the lawful owner.

The Bitcoin SV approach: Property rights are defined by law, not by code. Bitcoin SV does not enable an unlawful way of obtaining coins, but helps law enforcement with transparency and traceability.

BTC has been for years propagating false information about Bitcoin. Selling the idea of censorship-resistance, BTC signals value to the dark net and crime cartels. Via reducing the peer-to-peer functionality, they gained control by running Lightning Network nodes. By defining Bitcoin as “digital gold,” they lure uneducated investors into BTC, making them believe BTC will gain value by not being used for anything at all. With “Don’t trust; verify,” BTC tricks people into thinking they play a role in the network, while they actually don’t. Finally, by stating “Not your keys, not your coins,” BTC tries to convince the public that law can be written over by code.

Crypto enthusiasts are starting to wake up to the fact that they have been lied to. Bitcoin SV does not promise anything untrue, just Bitcoin as described in the whitepaper. This is the value of Bitcoin to be found only on BSV, nowhere else.